Newswire
Calendar
Features
Home
Donate
From the Open-Publishing Calendar
From the Open-Publishing Newswire
Indybay Feature
Publish to Newswire
Add an Event
Related Categories: Americas | International | Global Justice & Anti-Capitalism | Immigrant Rights | Police State & Prisons
Refugee Caravan Carries On to Defend the Right to Seek Asylum
by Pueblo Sin Fronteras
Friday Apr 13th, 2018 5:20 PM
We call on the people of the United States to support and join our struggle. Already, allies from the Tohono O’odham people, the National Alliance of Domestic Workers, and the Palestine people have expressed solidarity. We hope that more people and organizations feel that our struggle is their struggle as well. 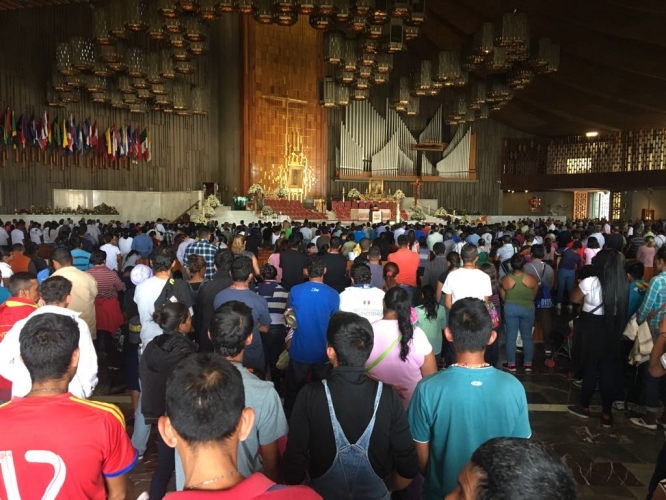 original image (1024x768)
AFTER DAYS OF PROTEST & DIALOGUE IN MEXICO CITY, REFUGEE CARAVAN CARRIES ON TO DEFEND THE RIGHT TO SEEK ASYLUM

Mexico City - We announce to the world that the 2018 Refugee Caravan “Migrantes en la Lucha” carries onward, steadfast in our goal of defending the dignity of all immigrants and the right to asylum for refugees. With more than 600 participants - most of them small children - we depart Mexico City today. From the bottom of our hearts we thank the Mexican people for their generosity and solidarity with our caravan, and may God bless them.

Our gaze is now northward, where many of us will go to request asylum in the United States because we cannot go back to our countries and we cannot live safely in Mexico. As our companion Carolina, a Salvadoran mother of 50 years of age, said: “there are 10 of us in my family, and if we go back to our country, I won’t live to tell the tale. The MS even found us here in Mexico, so I have to go to the USA to seek refuge.” We’re not fleeing our countries because we feel like it, we’re fleeing because we’re forced to by the injustices in our countries.

We call on the organizations of the United States and the world for solidarity and support for transport and food. We struggled and won transit permits from the Mexican government, so we can travel by bus, but don’t have enough funds to pay the tickets. We’re worried about the safety of the mothers, our children and the elderly and ill, because our only option, the train known as The Beast, is not adequate. For now we carry on as we are able.

During the past few days in Mexico City:

● We visited the Basilica of Guadalupe to thank God for protecting our path.

● We held demonstrations at the National Immigration Institute, the Mexican Refugee Aid Commission (COMAR), the Senate of the Republic, and the United Nations, to demand that our rights be respected since we have been displaced from our countries. We denounced Mexico’s militarized immigration policies which repress immigrant people under pressure from the United States, we denounced the lack of capacity and financing of the COMAR to attend to refugees, especially women, children, sick and LGBTQI.

● In a march outside the Honduran Embassy, we yelled for the Honduran ambassador to come outside and we insisted that he walk with us, so that he would feel a small part of what we suffer as migrants due to the injustice in our home countries. We made him march while carrying a child, so he would feel the weight that we carry as parents in this journey.

● We marched to the US embassy to tell President Trump that we are human beings who deserve dignity. We asked God to touch his heart and that he would stop treating us so unkindly.

We have heard that Mexico and the United States are sending military troops to their borders. We reject the use of soldiers against the civilian population in border communities and we demand these soldiers be withdrawn, because we are a nonviolent movement. We condemn that these governments are using our movement as a pretext to apply military force against civilians, in the same style as the dictatorial regime of Juan Orlando Hernández in Honduras.

Now we are headed north, demanding that our rights be respected. In Puebla, Mexico, we spent 3 days in workshops with lawyers from the US and Mexico about refugee law and the right to political asylum. We also learned that these governments jail us without cause, expose us to abuse and discrimination, and that they may separate us from our children. Even so, while we are unable to return to our countries or to live safely in Mexico, we look north.

We call on the people of the United States to support and join our struggle. Already, allies from the Tohono O’odham people, the National Alliance of Domestic Workers, and the Palestine people have expressed solidarity. We hope that more people and organizations feel that our struggle is their struggle as well.

We ask that the U.S. government stop using and manipulating Mexican institutions as an extension of its militarized and racist immigration policy.

We ask that the U.S. government stop incarcerating immigrants in prisons, and respect our fundamental right to seek asylum.