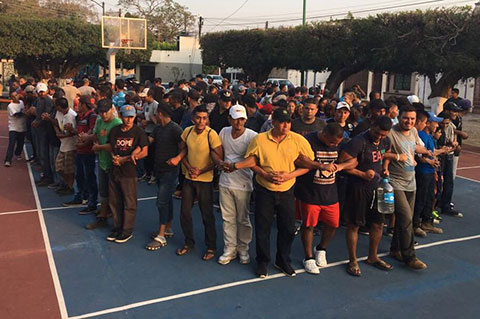 Hundreds of Hondurans have fled their homes and joined the Refugee Caravan in order to seek refuge in Mexico or the U.S. They, along with their fellow caravan members, have organized and developed a network of mutual support within the caravan to protect themselves from dangers such as extortion, robbery, murder, sexual assault, torture, and deportation without a right to seek asylum, which virtually all those who journey alone confront. On March 25, the caravan departed from Tapachula, a city in Chiapas, Mexico near the Guatemalan border.

For more than fifteen years, members of the Pueblo Sin Fronteras collective have been reaching out to the most vulnerable immigrants in the United States and to migrants and refugees on the move. In a bilingual statement of solidarity with displaced people and denouncing calls for violence against the refugee caravan, Pueblo Sin Fronteras writes: