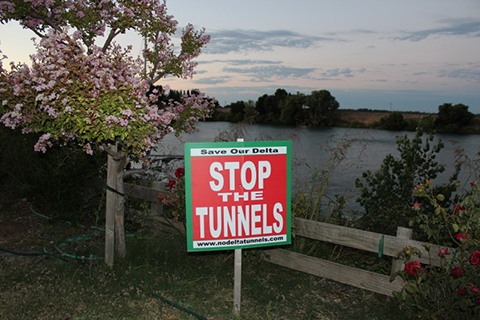 The Newsom administration on May 2 shelved the plan to build twin Delta Tunnels — and announced it will start a renewed environmental review for a single Delta Tunnel to facilitate the export of northern California water to San Joaquin agribusiness and Southern California Water agencies.

As the Delta smelt moves closer and closer to extinction in the wild, the Department of Water Resources (DWR) reported that it is “taking formal steps” to withdraw proposed permits for the WaterFix project and begin a renewed environmental review and planning process for “a smaller, single tunnel project that will protect a critical source of water supplies for California.”

The announcement marks the end of the twin tunnels project that Arnold Schwarzenegger began in 2007, itself a revival of the peripheral canal plan that the voters overwhelmingly rejected in the November 1982 election. After beginning his third term as Governor, Jerry Brown continued to pursue the Bay Delta Conservation Plan, as it was called, until it was renamed the California WaterFix in 2015.

Governor Newsom calls for end to twin tunnels, but supports one delta tunnel