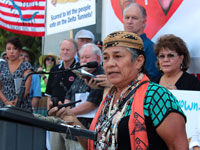 Restore the Delta (RTD) and many other groups held a large rally at the State Capitol on July 29, featuring the delivery of a “Death of the Delta" coffin containing thousands of public comments opposing Governor Jerry Brown’s peripheral tunnels.

Hundreds of people, including fishermen, Tribal leaders, environmentalists, Delta farmers and environmental justice advocates, rallied to protest Jerry Brown’s tunnel plan and to call for a new Draft Bay Delta Conservation Plan (BDCP) Environmental Impact Report/Environmental Impact Statement (EIR/EIS). The protest was held on the final day of the public comment period for the BDCP. The opponents charged that the EIR/EIS process has been “fatally flawed” due to its lack of public outreach to non-English speakers, failure to present a funding plan, exclusion of any non-tunnels alternative, and scientists’ identification of numerous “red flags.”

The rally opened with a blessing by Caleen Sisk, Chief and Spiritual Leader of the Winnemem Wintu Tribe, who said, “We ask that the Great Creator look down on our hearts and open our minds so we can see the good things and that the good people will wake up to join this effort to protect the waters of not only California but the world. All of the waters are connected." Chief Sisk emphasized that rather than growing export crops on drainage impaired land on the west side of the San Joaquin Valley, California is one of four salmon states in the U.S. and should rebuild the salmon population for economic, cultural and spiritual reasons. Salmon now contribute many billions to the New Zealand economy – and California should embrace its role as a salmon state.