Photo of Jerry Brown courtesy of Restore the Delta. 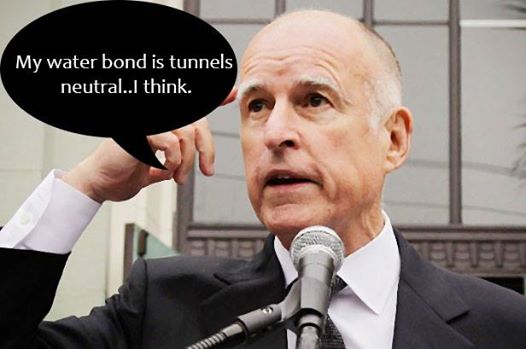 In an email sent to his campaign supporters on August 5, Governor Jerry Brown called for a “no frills, no pork” $6 billion bond that would be “tunnels neutral.”

Opponents of the Bay Delta Conservation Plan’s proposed $67 billlion tunnels quickly challenged the claim that the bond is” tunnels neutral” – and called for Brown to release the language of his water bond.

Brown explained the reasons for his pared down bond in his email, one of only three his campaign staff have sent out to supporters during his reelection campaign:

“Five years ago, state legislators and the Governor put a pork-laden water bond on the ballot — with a price tag beyond what’s reasonable or affordable. The cost to taxpayers would be enormous — $750 million a year for 30 years — and would come at the expense of funding for schools, health care and public safety. This is on top of the nearly $8 billion a year the state already spends on bond debt service.”

Since being elected governor, I’ve worked with the Legislature to reduce the state’s fiscal liabilities. Together, we’ve made steady progress paying down debt and enacting responsible, balanced budgets and it is no time to turn back now. Therefore, I’m proposing a no-frills, no-pork water bond that invests in the MOST CRITICAL PROJECTS without breaking the bank.

“My $6 billion plan provides for water use efficiency and recycling, effective groundwater management and added storage. It invests in safe drinking water, particularly in disadvantaged communities and for watershed restoration and increased flows in some of our most important rivers and streams.”

Restore the Delta (RTD) questioned Governor Brown’s assertion that his new water bond is “tunnels neutral,” and called upon him to release his specific proposed language.

“Governor Brown is using the bully pulpit of his office to insist that his bond proposal is tunnel neutral,” said RTD Executive Director Barbara Barrigan-Parrilla, "However, with $700 million marked for statewide water related habitat, flows, and water quality in watersheds, Restore the Delta questions if these funds will be used to create the water fund account needed to make the Delta tunnels project operational.”

“We are calling on Governor Brown to release the specific proposed language of the bond to prove that it is truly Delta tunnels neutral. According to documents from a Freedom of Information Act Request filled by the Kern County Water Agency, BDCP water exporters are expecting the State to fund a water flows account for over $1 billion so that they can receive full export levels from the project,” said Barrigan-Parrilla.

“This documented assurance reveals that the water exporters thirst will not be quenched by a tunnel project that simply promotes reliability, but rather by one that produces more and more from Northern California groundwater supplies, rivers, and the SF Bay-Delta estuary," she stated.

Here is the link to documents showing that the water exporters are counting on money from a state water bond to help finance the project and mitigate its damage to fisheries, river flows and the Delta: http://restorethedelta.org/documents-for-august-6-press-release/

BDCP background: Governor Jerrry Brown's Bay Delta Delta Conservation Plan to build the 35-mile long peripheral tunnels won't create one drop of new water, but the project will lead to horrendous environmental degradation, according to tunnel critics. The construction of the tunnels, estimated to cost $67 billion, will hasten the extinction of Central Valley Chinook salmon, Delta and longfin smelt and other fish species, as well as imperil the salmon and steelhead populations on the Trinity and Klamath rivers.

The tunnels are being constructed in tandem with the federal government's plan to raise Shasta Dam, a project that will flood many of the remaining sacred sites of the Winnemem Wintu Tribe that weren't inundated by Shasta Dam.
Add Your Comments
Support Independent Media
We are 100% volunteer and depend on your participation to sustain our efforts!