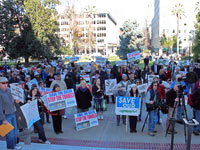 Over 400 people organized by Californians for a Fair Water Policy, a statewide coalition opposing Gov. Brown’s massive water export tunnels, attended a rally on December 13 at the State Capitol protesting the Bay Delta Conservation Plan as the 120 day comment period for the BDCP and environmental documents began.

"So, on this Friday the 13th the BDCP public comment period begins," said Bill Jennings, Executive Director of the California Sportfishing Protection Alliance (CSPA). "They give us 40,214 pages of documents – that’s a nine-foot high stack containing 20% more pages than the 32 volumes of the last printed edition of the Encyclopedia Britannica. We’re asked to provide comments within 85 working days – that’s 473 pages a day. You can purchase a printed copy for only $3,000."

Tunnel opponents pointed out “fatal flaws” of the tunnels they said would be too costly, create no new water and do nothing to increase regional water self-reliance. Experts identified many impacts from the tunnels that would damage water quality, harm the environment, destroy fisheries and sustainable farming, and impose billions of dollars of increases on water ratepayers. Two-thirds of the water would go to huge corporate agribusiness operations on the west side of the San Joaquin Valley, engaged in unsustainable agriculture, growing permanent crops on arid land.