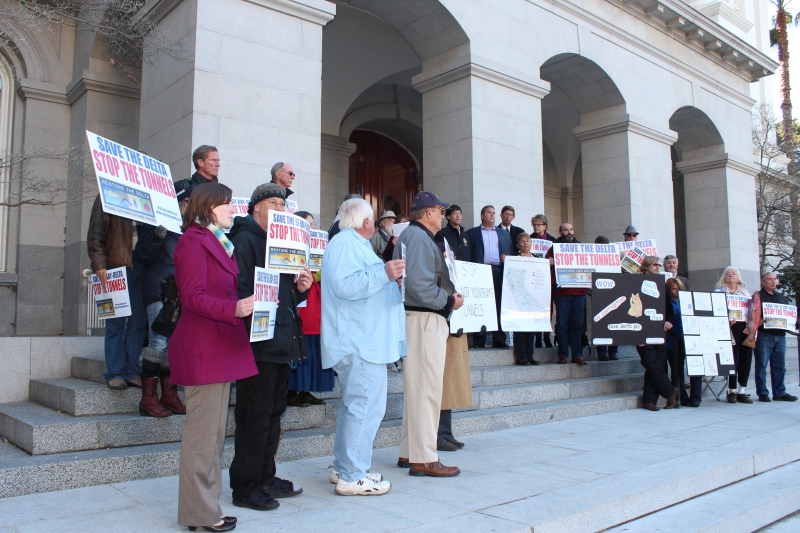 The widely-criticized plan proposes to construct three new intakes in the north Delta along the Sacramento River about 35 miles north of the existing South Delta pumping plants. Two 35-mile long twin tunnels would carry the water underground to the existing pumping plants that feed canals sttetching hundreds of miles to the south and west.

The release of the public review draft of the Bay Delta Conservation Plan and its corresponding Draft Environmental Impact Report/Environmental Impact Statement (EIR/EIS) triggers a 120-day period for the gathering of public comments, from Dec. 13, 2013 through April 14, 2014.

In a statement, California Natural Resources Secretary John Laird described the BDCP as a “rational, balanced plan to help meet the needs of all Californians for generations to come.”

"By meeting the state's dual goals for BDCP of ecosystem restoration and water supply reliability, we will stabilize and secure against catastrophe the water deliveries that sustain our homes, jobs, and farms, and do so in a way that not only protects but enhances the environment,” he claimed.

However, rather than being a “rational, balanced plan” as Laird claimed it is, Caleen Sisk, Chief and Spiritual Leader of Winnemem Wintu Tribe, denounced the tunnel plan as “a death sentence for salmon and a violation of indigenous rights.”

Chief Sisk spoke at the press conference Monday to re-affirm the Tribe’s opposition against the construction of Brown’s water export tunnels under the BDCP – and will speak at another rally sponsored by Californians for a Fair Water Policy on the north steps of the State Capitol at 12:00 noon on Friday, December 13.

Sisk said California’s State Water Project and the federal Central Valley Water Project divert too water from the San Francisco Bay/Sacramento River Delta, the largest estuary on the Pacific Coast, to the state’s water brokers to supply unsustainable industrial agriculture, destructive fracking for oil and municipal developments in the desert.

The proposed peripheral tunnels, with a conservatively estimated price tag of $54.1 billion, will undoubtedly kill the sensitive Delta, a delicate mix of salt and freshwater, that is vital to the life cycle of California salmon as well as other fish and species, according to Sisk.

“There is no precedent for the killing of an estuary of this size, so how could any study be trusted to protect the Delta for salmon and other fish?” asked Sisk. “How can they even know what the effects will be? The end of salmon would also mean the end of Winnemem, so the BDCP is a threat to our very existence as indigenous people.”

“As one of the many traditional salmon tribes in California, the Winnemem rely on access to salmon to maintain our cultural and religious practices,” she said. “The peripheral tunnels, if ever constructed, would therefore be in violation of our indigenous rights to maintain our cultural practices with salmon, as outlined in the United Nations Declaration on the Rights of Indigenous Peoples.”

The Bay Delta Conservation Plan has been developed without "free, prior and informed consent" by California Tribes, as required under the UN Declaration on the Rights of Indigenous Peoples, Articles 10, 11, 19, 28 and 29. (http://www.un.org/esa/socdev/unpfii/documents/DRIPS_en.pdf‎)

In fact, the first formal informational meeting for California Tribes on the BDCP was held on December 10, in Sacramento - the day after the EIR/EIS for the tunnel plan was released! That is hardly "free, prior and informed consent - or "government-to-government" consultation, as required under state, federal and international law.

At a recent public meeting in Redding, Sisk said Deputy Director of the Natural Resources Agency Jerry Meral, who in April claimed that "the Delta cannot be saved," disclosed that the peripheral tunnels are connected to the U.S. Bureau of Reclamation’s plan to raise Shasta Dam by 18.5 feet. The dam raise that would destroy or submerge nearly 40 sacred sites and destroy potential salmon spawning areas. “We are currently working on plans to re-introduce our salmon above the dam into the McCloud River,” said Sisk.

She said the planned Delta tunnels will require more water be taken from the Trinity River and Lake Shasta, which is fed by the Upper Sacramento, McCloud and Pit Rivers. This will add even more stress to the struggling ecosystems of these rivers.

“This plan is not meant to benefit the public of California, native and non-native, but purely to line the coffers of the lobbyists who have been buying off Governor Brown all along, such as Beverly Hills Big Ag billionaire Stewart Resnick and his wife Lynda who contributed $99,000 to his 2010 campaign,” said Sisk.

“The peripheral tunnels are a violation of the public’s trust in Gov. Brown, and not the answer to dealing with the state’s forthcoming water shortages. There are better solutions,” she concluded.

Sisk emphasized that California is one of four salmon states in the U.S. – and has the potential to beome the leading producer of salmon in the nation and the world if the rivers are restored.

“In the final analysis, BDCP is a blatant water grab and represents an insidious attack by powerful special interests in the south state on the fisheries, farms, communities and future prosperity of California,” said Jennings.

“In the final analysis, BDCP is a blatant water grab and represents an insidious attack by powerful special interests in the south state on the fisheries, farms, communities and future prosperity of California,” said Jennings.

Since the State Water Project began exporting water in 1967, water exports have increased by more than 60%; outflow to the Bay has declined by more than 40%, according to Jennings.

"Since 1967, the flow and water quality standards protecting the Delta – inflow, outflow, export ratios, salinity - have been violated hundreds of times, without a single enforcement action taken. Likewise, water rights, area of origin and watershed protection statutes have been ignored," said Jennings.

Anadromous fisheries have experienced similar declines. For example, steelhead and winter-run salmon are down 91.7% and 95.5%, respectively, Jennings noted.

"And now, the architects that orchestrated this catastrophe propose to divert more water around an estuary already hemorrhaging from lack of flow. Moreover, they want to build the tunnels now and decide how to operate them later. This is a death sentence for the estuary," he concluded.


Bob Wright, Senior Counsel for Friends of the River, described the Government agencies calling the BDCP a “conservation plan” as “a fraud on the public.”

“The plan is to grab the water and in the process take it away from designated critical habitat for several already endangered and threatened species of fish including Sacramento River Winter-Run and Central Valley Spring-Run Chinook Salmon and drive them into extinction,” he emphasized. “That is against the law because federal agencies are prohibited from doing that by the Endangered Species Act."

“We oppose the rush to build a project that would exterminate salmon runs, destroy sustainable family farms and saddle taxpayers with tens of billions in debt, mainly to benefit a small number of huge corporate agribusinesses on the west side of the San Joaquin Valley,” said Barbara Barrigan-Parrilla, Executive Director of Restore the Delta. “This proposal is fatally-flawed.”

Carolee Krieger, Executive Director of the California Water Impact Network (C-WIN), said, “These documents are a whitewash of a white elephant. The BDCP is a sham and a scam -- fluffy propaganda for a project that will burden ratepayers and taxpayers with ruinous debt for the benefit of a few hundred corporate farms.”

“Nor will the Twin Tunnels deliver any extra water to South State ratepayers. In fact, if Bay/Delta flows meeting the biological standards of the scientific community are established, there will be less water available for export, not more – and that means everything squandered on the Twin Tunnels will have been money for nothing,” she observed.

Zeke Grader, President of the Pacific Coast Federation of Fisherman’s Associations (PCFFA), summed up the BDCP boondoggle as a “Triple Platinum Lie.”

Californians for a Fair Water Policy, a statewide coalition opposing the tunnels, will again rally at the north steps of the State Capitol on Friday, December 13 at 12 noon as the Brown Administration’s proposed project is published in the Federal Register, opening the public comment period.

Opponents will point out expected damage to water, the environment, fish, farming and water ratepayers, and tax payers, according to a media advisory. 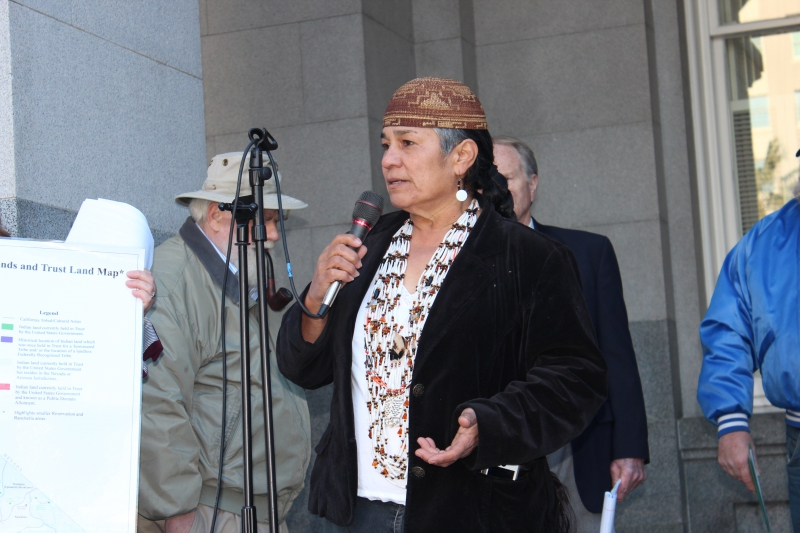 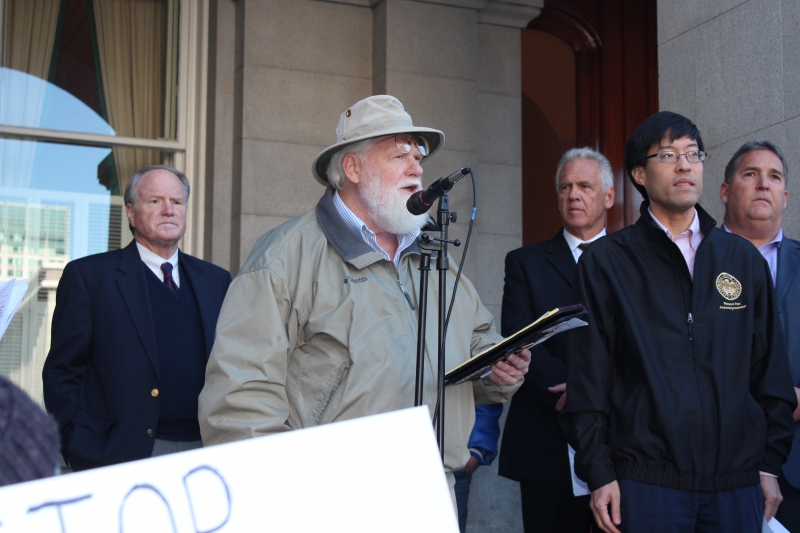 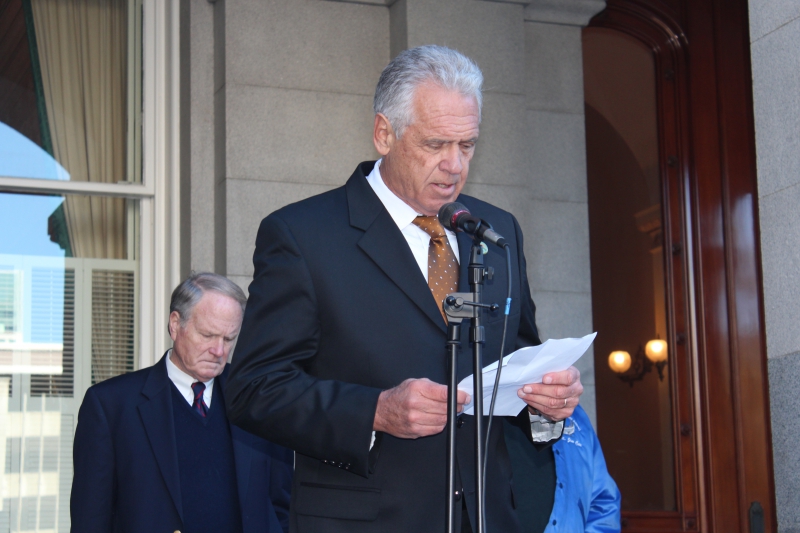 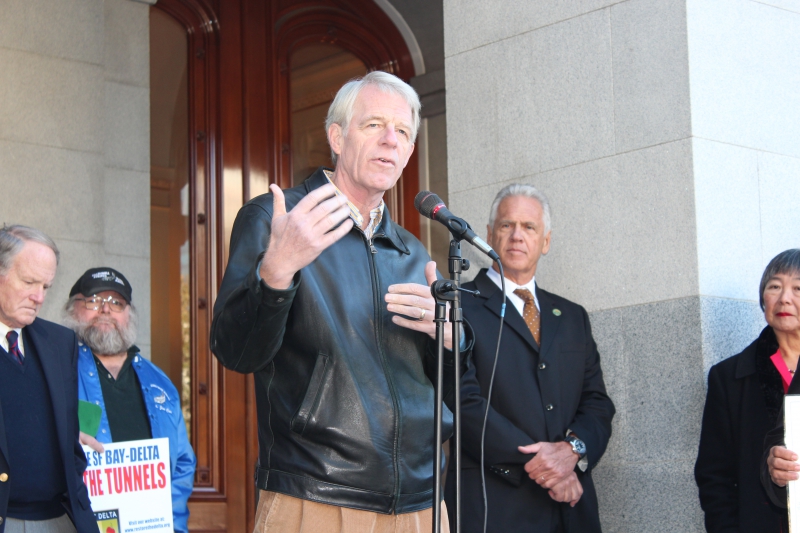 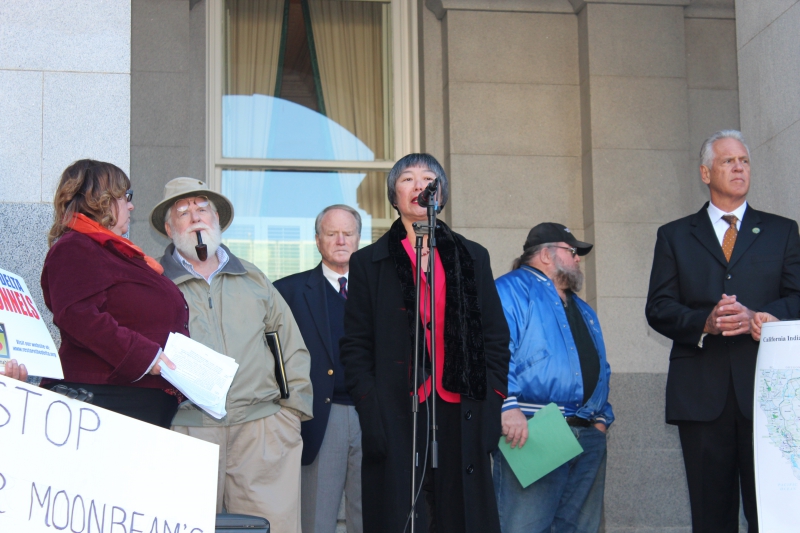 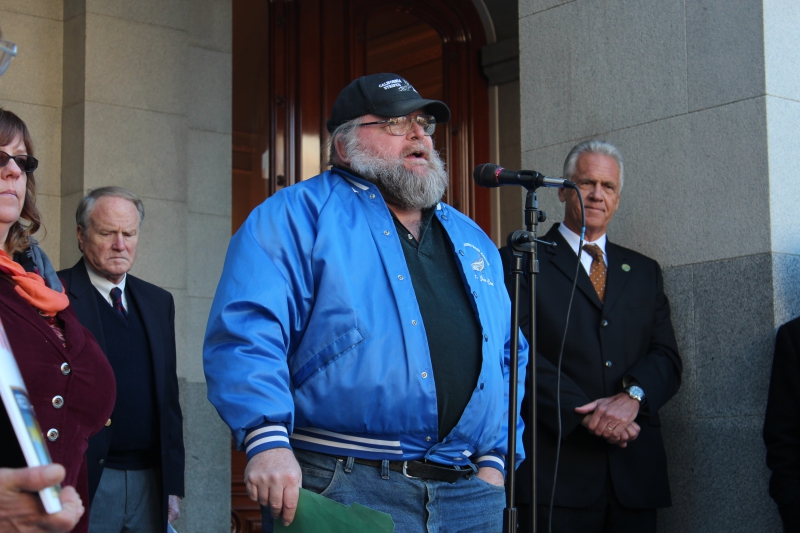 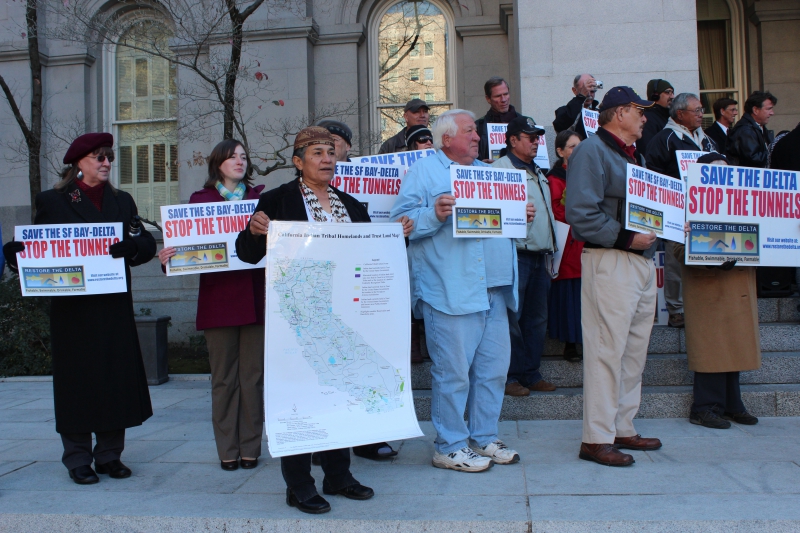 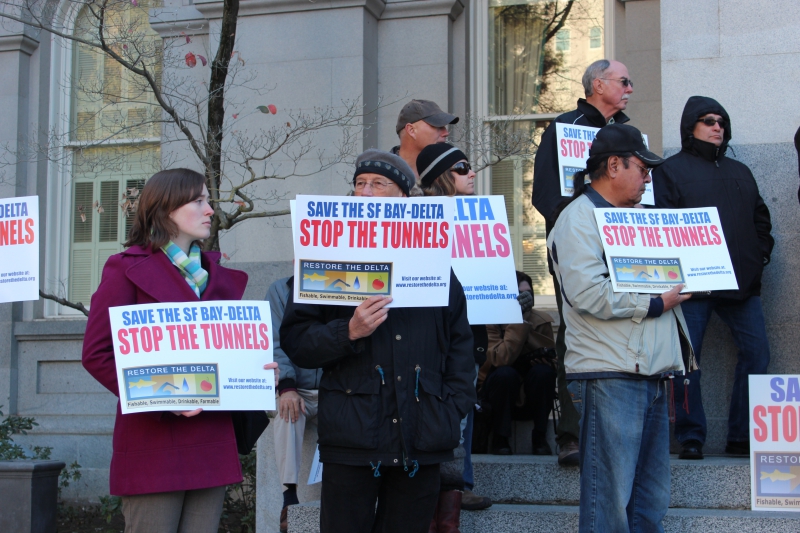 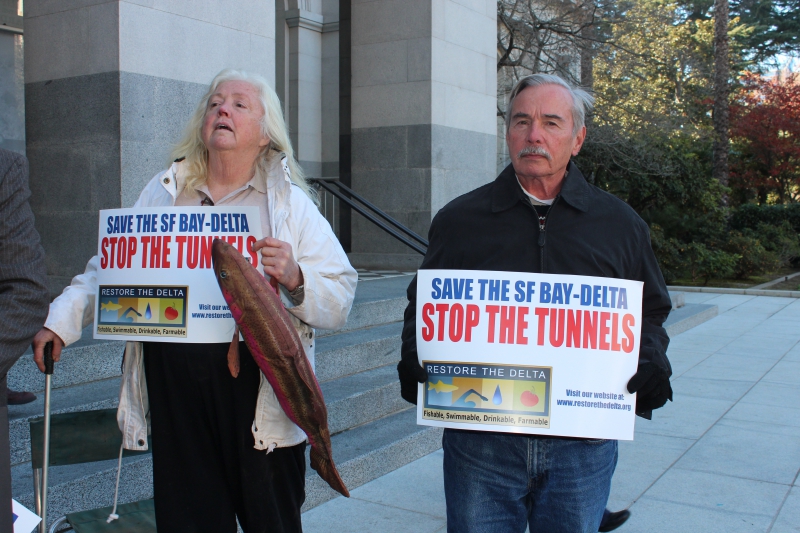 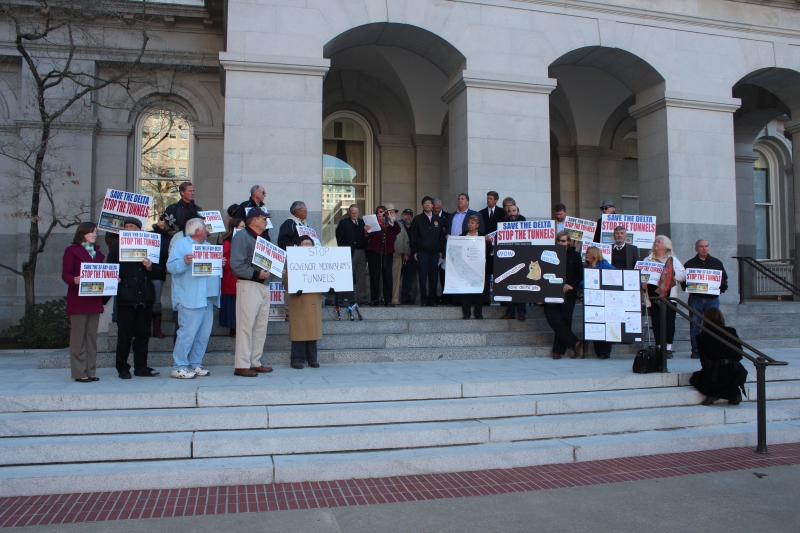