Newswire
Calendar
Features
Home
Donate
From the Open-Publishing Calendar
From the Open-Publishing Newswire
Indybay Feature
Publish to Newswire
Add an Event
Related Categories: California | Central Valley | Environment & Forest Defense | Government & Elections
Tunnel Opponents Rally Against Brown Water Plan
by Dan Bacher
Monday Aug 4th, 2014 11:56 AM
Zeke Grader, executive director of Pacific Coast Federation of the Fishermen’s Associations, made the inevitable comparison between the water pirates leading the Department of Water Resources and the Bureau of Reclamation and the banksters who engineered the economic crash of 2008 and the bank bailouts.

“Bernie Madoff may be in jail, but it is pretty obvious he is being channeled now by the Bureau of Reclamation and DWR - and we have to tell them today that we are not going to stand for grand theft water," quipped Grader. 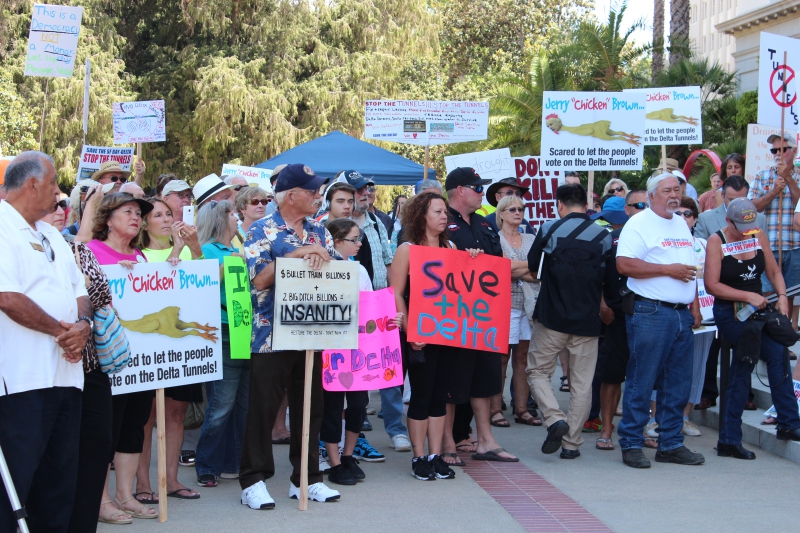 Restore the Delta (RTD) and many other groups held a big rally at the State Capitol on Tuesday, July 29, featuring the delivery of a “Death of the Delta" coffin containing thousands of public comments opposing Governor Jerry Brown’s peripheral tunnels.

Hundreds of people, including fishermen, Tribal leaders, environmentalists, Delta farmers and environmental justice advocates, rallied in over 100 degree heat to protest Jerry Brown’s tunnel plan and to call for a new Draft Bay Delta Conservation Plan (BDCP) Environmental Impact Report/Environmental Impact Statement (EIR/EIS). The protest was held on the final day of the public comment period for the BDCP.

The opponents charged that the EIR/EIS process has been “fatally flawed” due to its lack of public outreach to non-English speakers, failure to present a funding plan, exclusion of any non-tunnels alternative, and scientists’ identification of numerous “red flags.”

The rally opened with a blessing by Caleen Sisk, Chief and Spiritual Leader of the Winnemem Wintu Tribe, and featured a number of speakers from an array of organizations. Musicians at the event included Raging Grannies of Sacramento and Fresno, who performed three original songs against the tunnels, and Johnathan Michelsen, who composed the songs "Blue Heron" and "Save the Delta" for the event.

Caleen Sisk said, “We ask that the Great Creator look down on our hearts and open our minds so we can see the good things and that the good people will wake up to join this effort to protect the waters of not only California but the world. All of the waters are connected."

"We are asking that Eagle beings and the great wolf come in and help us and be our guides to see good things; to know the right things to say; and be heard when we seek out and write things on paper, when we submit to good people who lead this country will hear us and know what to do We hope they have the strength to know what needs to be done even in the face of opposition and lead with their heart instead of their pocketbooks,” she said.

Chief Sisk emphasized that rather than growing export crops on drainage impaired land on the west side of the San Joaquin Valley, California is one of four salmon states in the U.S. and should rebuild the salmon population for economic, cultural and spiritual reasons. Salmon now contribute many billions to the New Zealand economy – and California should embrace its role as a salmon state.

The Tribe is now engaged in a campaign to bring back the McCloud River winter run chinook salmon back from New Zealand to be reintroduced into the McCloud above Shasta Dam – and is currently fighting the Shasta Dam raise that is proposed by the federal government in tandem with the construction of the twin tunnels.

After she spoke, Chief Sisk held up a sign stating, “No Shasta Dam Raise,” while Jessica Lopez, Chair of the Concow Maidu Tribe, held up a sign proclaiming, “We are not defeated.”

“The state and federal government took away our salmon on the North Fork of The Feather River when they built Oroville and other dams,” Lopez said. “We want to bring those fish back.”

“Instead, the tunnel plan will take all of the water from our rivers, which are low now, due to the drought. It’s the Westlands Water District and other agribusiness interests that want the water, not small family farmers. They want to take our water, our food, our medicine," said Lopez.

She emphasized that the digging of the tunnels is likely to destroy and desecrate ancient Miwok Indian burial and village sites on the Delta. “This is cultural genocide,” said Lopez.

After Sisk spoke, Michael Jackson, lawyer for the California Water Impact Network (C-WIN), California Sportfishing Protection Alliance and other groups, exposed the insanity and big lies that the BDCP is based on.

“There are many mistakes in this (BDCP EIR/EIS) document,” said Jackson, as recorded on video by Gene Beley of the Central Valley Business Times (http://www.centralvalleybusinesstimes.com/stories/001/?ID=26424). "This review did reaffirm some conclusions are simply continuations of the big lies that built the original State Water Project. One of the biggest lies is that there is now enough water for the tunnels.”

In 1960 when the Department of Water Resources (DWR) issued its plan for the State Water Project, they said would only be able to get three million acre feet of water by 1981 if they didn’t get the North Coast rivers connected with the project, wrote Beley. When he was Governor, Ronald Reagan took the North Coast rivers off the table for SWP diversions for environmental reasons. The people of the Sacramento Valley and upstream were worried, so the concept of “area of origin” started.

“It is a lie that is reflected by the document that the area of origin will protect us,” Jackson stated. “The way you can tell that by evidence is the State Water Resources Control Board at the instigation of DWR and Southern California water users, are about to launch an attack on Delta farming, claiming they are taking State Project water.”

“All of the promises in history were that they (Southern California) would not take one drop of water that was needed in Northern California,” said Jackson. “They also made clear in this document that the Delta Protection Act is simply words. They don’t think it can be enforced. They don’t intend to enforce it.”

“They don’t care about the environment to the Delta because they have a magic bullet again this time — habitat restoration can replace outflow. There will be no outflow to speak of past the new twin tunnels. When you take 2.5 million acre feet, which is the paper water, and make it actual, you end up doing grave damage to everything downstream. You’re not going to have quality water to farm or for fish,” noted Jackson.

“One of the big lies is that they give a damn about any fish. What they are doing today is exterminating Delta smelt because it is in the way of the pumps. If they have to release outflow for fish below, the tunnels die. If they can kill the fish before then, the tunnels live," he concluded.

Jackson read a powerful statement from Bill Jennings, Executive Director of the California Sportfishing Protection Alliance, who couldn’t attend the rally because of illness. Jennings pointed out the dire situation that Delta smelt, an endangered species and indicator species that demonstrates the health of the Delta, is now in:

"Several days ago, the Department of Fish and Wildlife released the results of the last of this year’s 20-mm surveys for Delta smelt. At one time, Delta smelt were the most abundant fish in the Delta. Today, they’re an endangered species. Delta smelt are the proverbial 'miner’s canary,' a yardstick of the health of the estuary,“ said Jennings.

“In 141 separate trawls at 40 locations in the Delta – stretching from Cache Slough to San Pablo Bay, the survey found two Delta smelt: that’s two! By far, the lowest number in history,” he stated.

“We don’t know where the point of no return is for Delta smelt – but it's close. And the same folks that orchestrated this disaster – or stood by as it unfolded – now ask us to trust them that their latest scheme, BDCP, will restore the Delta,” wrote Jennings.

Wilson stated, “The reason the Capitol lawn is so brown is the water got shipped out by the end of last fall to fill the reservoirs in Southern California. We have an empty cup. They have a full cup. The only thing is, they think we still have a few drops left in our cup—and they want it."

Esperanza Vielma with EJAG and Cafe Coop blasted the Brown administration for its failure to publish the BDCP EIS or EIR in Spanish or other languages.

"There are over 600,000 limited English speakers in five Delta counties. Yet there are no interpreters or translated documents provided to explain the 52 impacts of the BDCP on Delta communities," said Vielma.

She urged the state and federal governments to stop the BDCP project immediately. "This is not a plan of inclusion, but a plan of exclusion."

Zeke Grader, executive director of Pacific Coast Federation of the Fishermen’s Associations, made the inevitable comparison between the water pirates leading the Department of Water Resources and the Bureau of Reclamation and the banksters who engineered the economic crash of 2008 and the bank bailouts.

“Bernie Madoff may be in jail, but it is pretty obvious he is being channeled now by the Bureau of Reclamation and DWR, and we have to tell them today that we are not going to stand for grand theft water," quipped Grader.

“We call upon Gov. Brown to rethink this unsustainable water export project,” summed up Barbara Barrigan-Parrilla, executive director of RTD. “The public comment process has been a mockery of outreach, dialogue and disclosure of what it will cost and who will pay.”

You can see Gene Beley's videos of the rally and the coffin delivery and a transcript of quotes from the speakers at: http://www.centralvalleybusinesstimes.com/stories/001/?ID=26424

And special thanks to Beley and Raging Grannies for the following: "We also ended with the Raging Grannies giving a salute to writer Dan Bacher, editor of Fish Sniffer magazine, for his dedication in uncovering much of the Sacramento behind-the-scenes politics with the twin tunnels and fracking," said Beley. 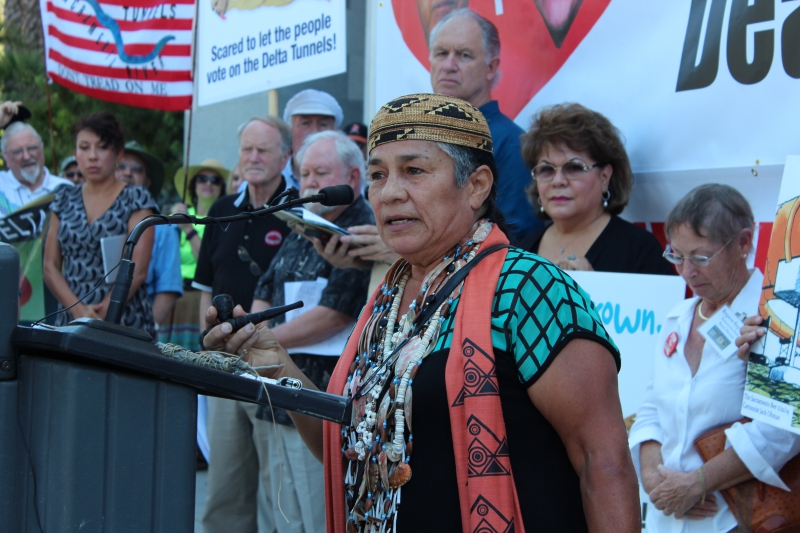 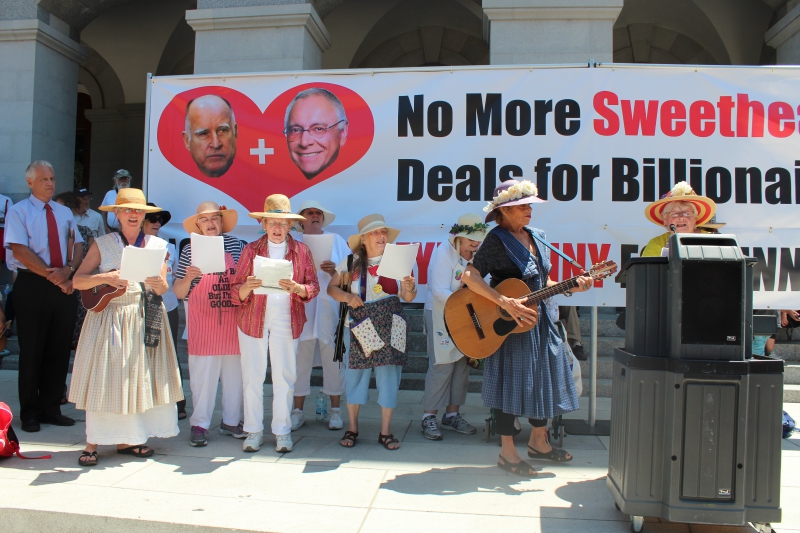 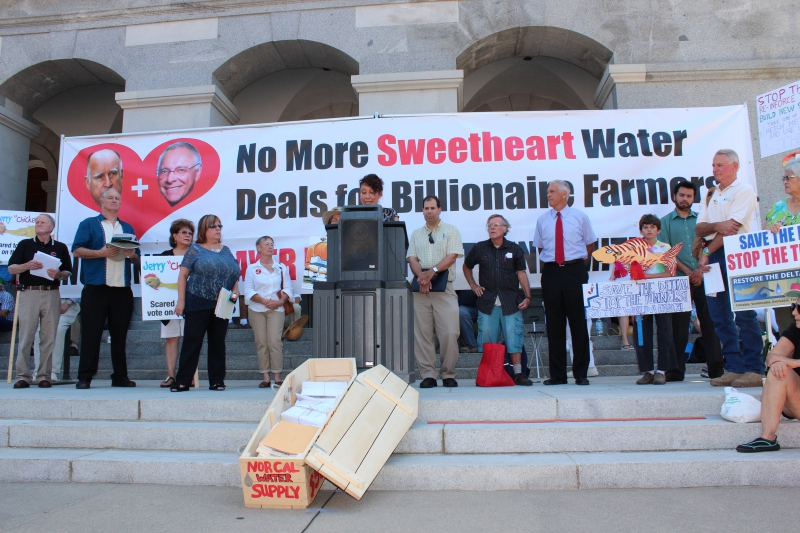 original image (5184x3456)
Esperanza Vielma with EJAG and Cafe Coop slammed the Brown administration for its failure to publish the BDCP EIS or EIR in Spanish or other languages.
§Esperanza Vielma
by Dan Bacher Monday Aug 4th, 2014 11:56 AM 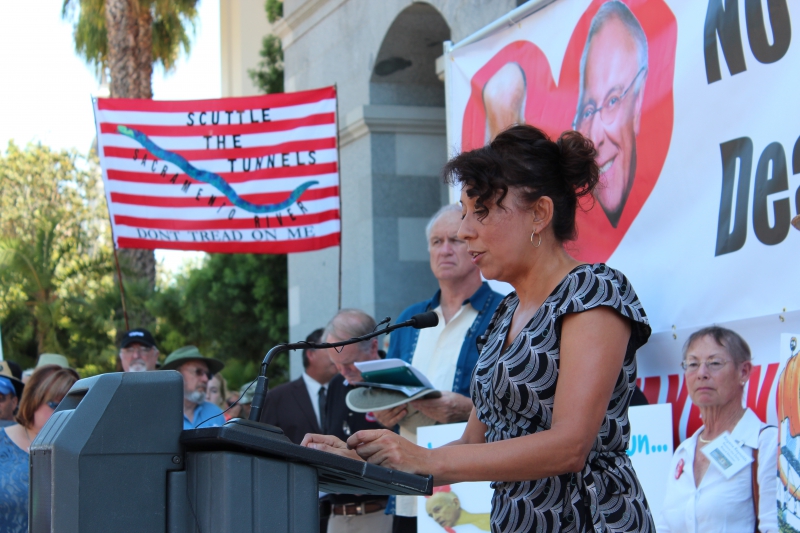 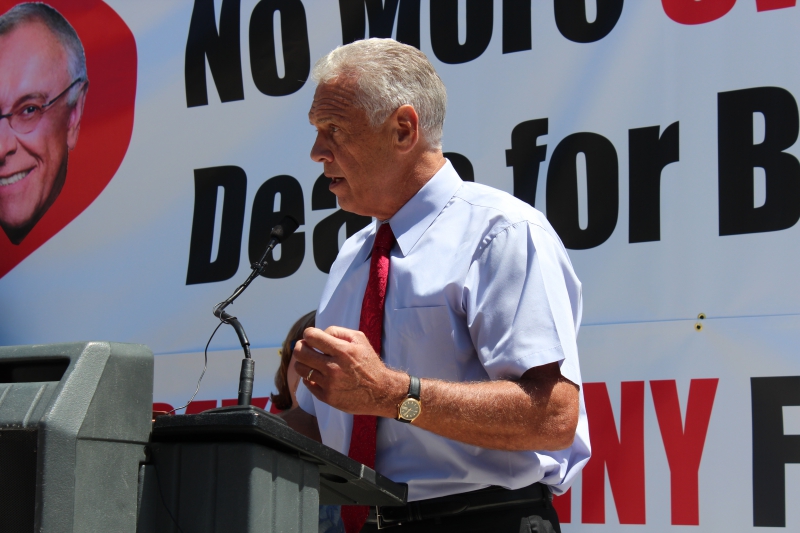 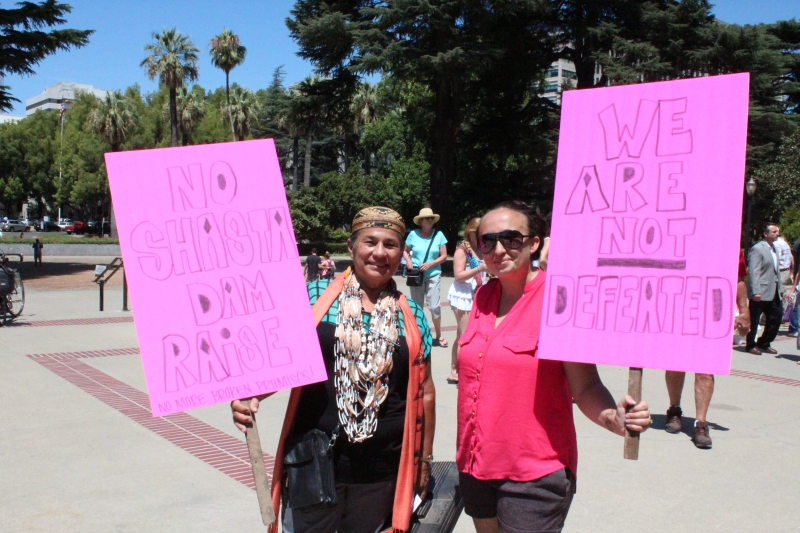 original image (5184x3456)
Caleen Sisk, Chief and Spiritual Leader of the Winnemem Wintu Tribe, and Jessica Lopez, chair of the Concow Maidu Tribe, display their signs at the rally against the tunnels.
§Assemblyman Roger Dickinson
by Dan Bacher Monday Aug 4th, 2014 11:56 AM 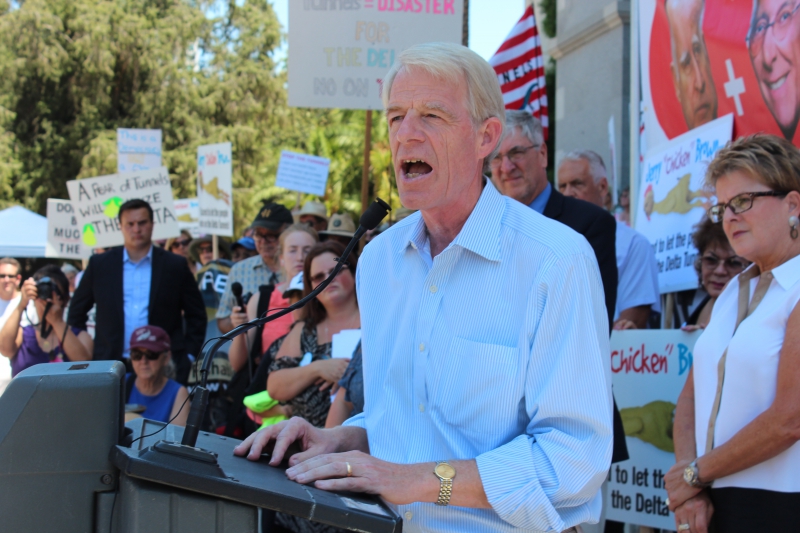 original image (5184x3456)
Assemblyman Roger Dickinson speaks out against the Bay Delta Conservation Plan.
§Do the world a favor
by Dan Bacher Monday Aug 4th, 2014 11:56 AM 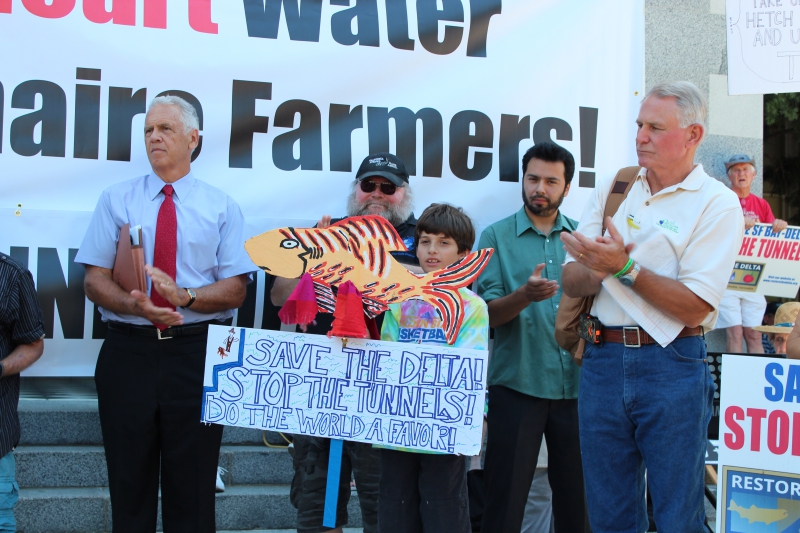 original image (5184x3456)
Bob Wright of Friends of the river, Jim Cox with the California Striped Bass Association, Adam Scow of Food and Water Watch, and Mark Wilson, Delta farmer, on the steps of the Capitol behind a young activist holding a very creative sign.
§Zeke Grader
by Dan Bacher Monday Aug 4th, 2014 11:56 AM 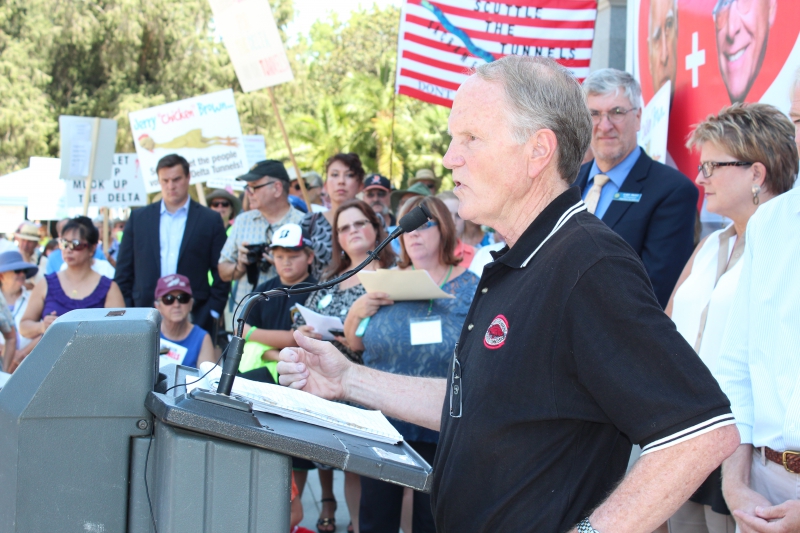 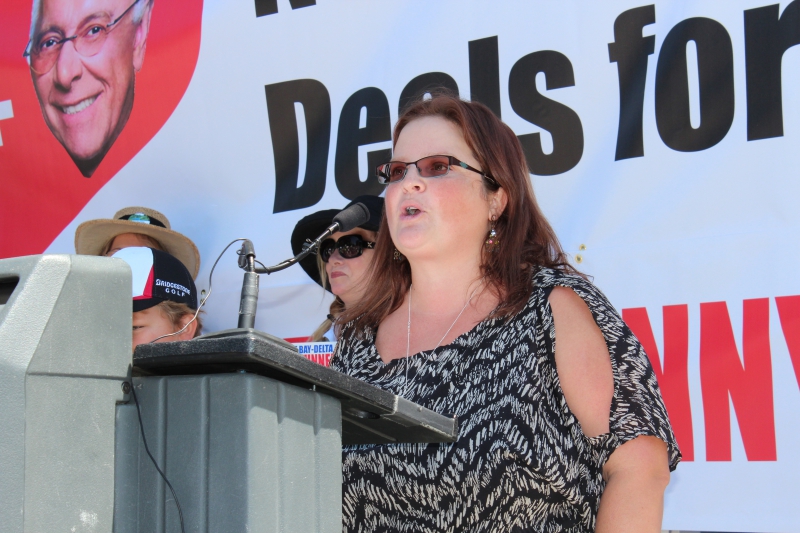 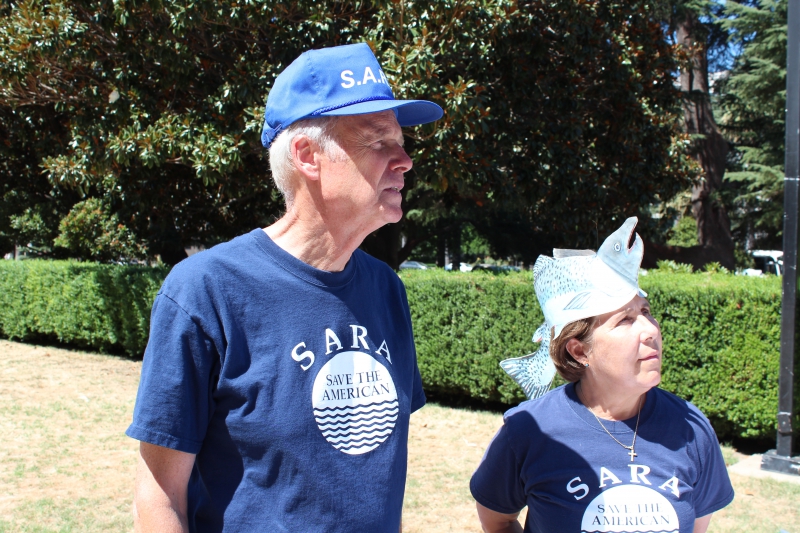 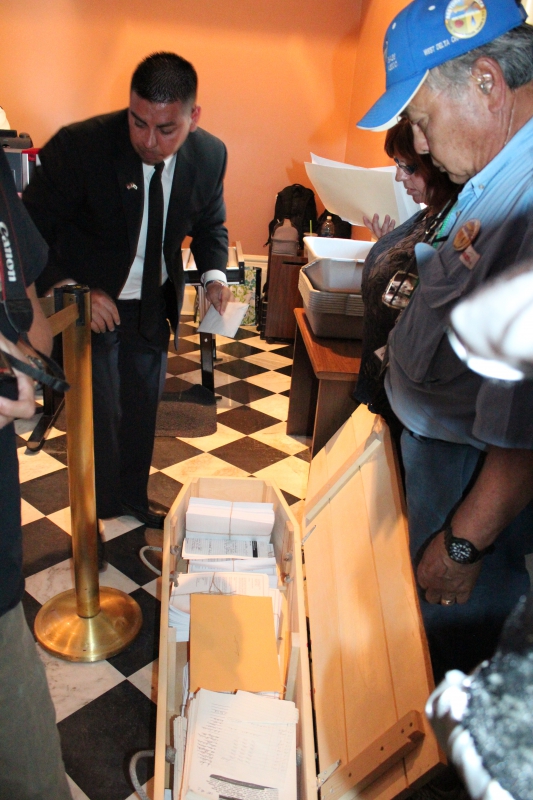 original image (3456x5184)
The Death of the Delta Coffin, filled with tens of thousands of comments and petitions against the tunnels, goes through Capitol security.
§Arrival in Office
by Dan Bacher Monday Aug 4th, 2014 11:56 AM 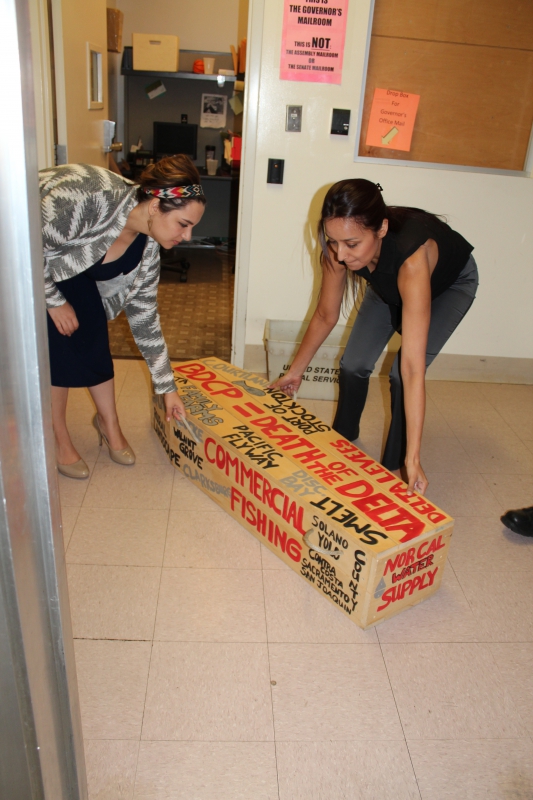 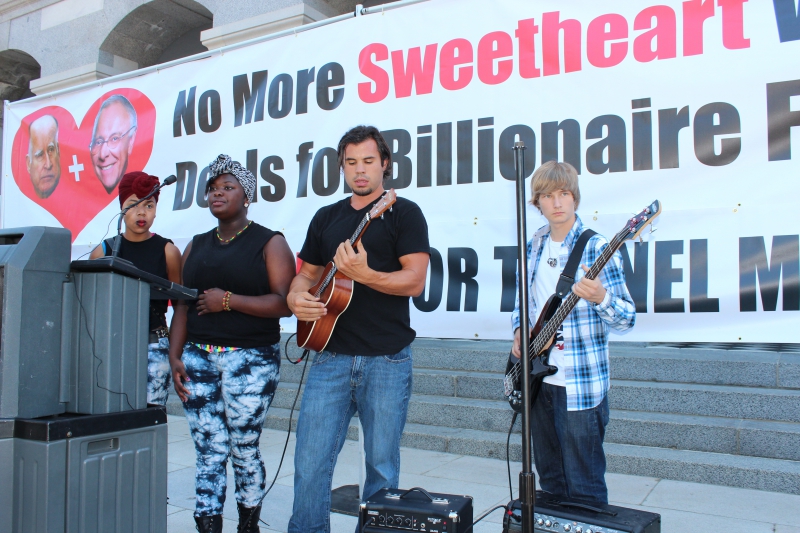 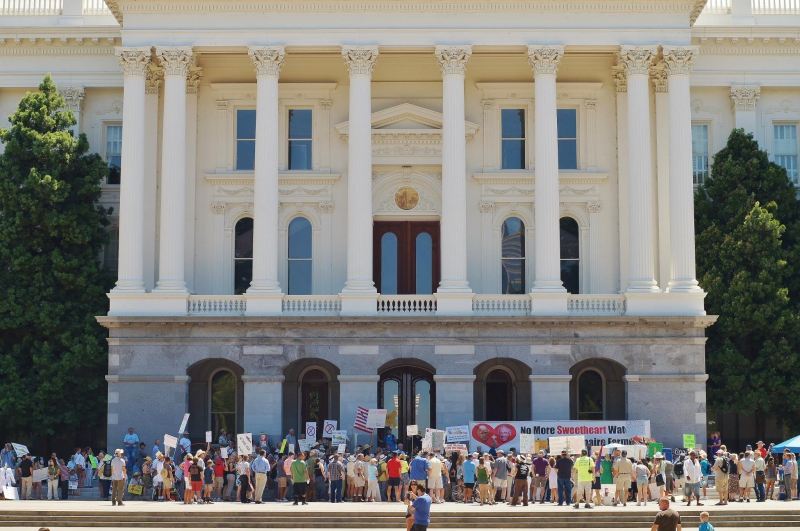 original image (2048x1361)
Rallying in 100-plus degree heat at the Capitol. Photo courtesy of Restore the Delta.
Add Your Comments
Support Independent Media