Add an Event
Newswire
Calendar
Features
Home
Donate
From the Open-Publishing Calendar
From the Open-Publishing Newswire
Indybay Feature
Publish to Newswire
Add an Event
Related Categories: California | Central Valley | Environment & Forest Defense | Government & Elections
Bay Delta Conservation Plan Officials Suppress Freedom of Speech
by Dan Bacher
Friday Jul 25th, 2014 9:28 AM
Bob Wright, Senior Counsel of Friends of the River, concluded, "The fish and the Delta are in peril. Extinction is forever. The 40,000 pages of BDCP project proponent advocacy are unworthy of the epic decisions to be made guiding the future of the fish, northern California Rivers, and the Delta. If this is not worth the environmental full disclosure required by law and the NEPA, CEQA and ESA required do-over, what is?" 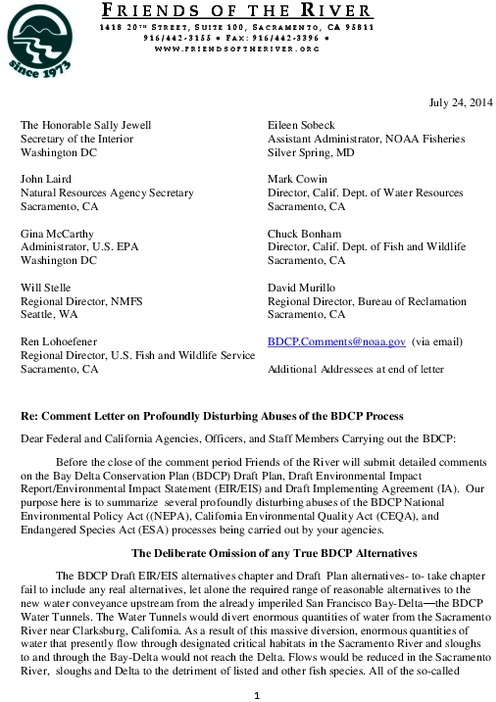 The letter blasts state and federal officials for "profoundly disturbing abuses of the BDCP process," including the "deliberate BDCP website suppression of comments," the deliberate omission of any true BDCP alternatives, misrepresenting taking water to be a "conservation" plan, secret BDCP planning with the exporters and their consultants, and "the deception and delusion in the BDCP."

"After the 40,000 pages of BDCP project advocacy called the Draft Plan and Draft EIR/EIS were released in December 2013 for public review and comment, the BDCP website was closed to the posting of comments and correspondence from the public," wrote Bob Wright, Senior Counsel of Friends of the River. "Consequently, an organization or individual attempting to wade through the 40,000 pages of self-interested project advocacy to spot the issues and figure out the truth is unable to learn from the comments and correspondence from other organizations and individuals who are not project proponents. The public’s ability to be informed regarding this project including cons as well as claimed pros would have been facilitated by having access to comments and correspondence made by others during the review process."

"Instead, the BDCP agencies have done their very best to keep the public in the dark about issues spotted by those who are not project proponents. This blinding of the public to critical environmental information even extends to comments by sister agencies," said Wright, citing just a few of the many possible examples of comments from public agencies that the citizen using the BDCP website does not get to see.

One of the comments Wright cites was this one from the San Joaquin County Board of Supervisors. "The BDCP is based upon this misrepresentation: that a massive new twin tunnel system, which would greatly reduce the natural flow of water through the Delta, qualifies as a ‘conservation’ project to restore the Delta ecosystem and protect species already verging on extinction."

FOR accused the agencies of abuses of the National Environmental Policy Act (NEPA), the California Environmental Quality Act (CEQA) and the Endangered Species Act (ESA). Wright also said the BDCP’s draft environmental impact report and statement (DEIR/DEIS) omit a range of reasonable alternatives required by law and that it “requires the preparation of a new draft plan and draft EIR/EIS and a new public review period to attempt to cure this fatal flaw.”

Wright accused officials behind the BDCP of a "double attack on the truth and on informed public review of the proposed project."

"The BDCP agencies will eventually have the opportunity, should they choose to steam full speed ahead in the face of red flags flying, to convince the courts that they proceeded in the manner required by NEPA, CEQA and the ESA," Wright wrote. "That is, the agencies can try to convince the courts that they really did not have to develop and consider a range of reasonable alternatives reducing exports; it was okay to suppress public comments and correspondence from the BDCP website; it was okay to misrepresent a new water diversion as a “conservation” plan; and it is okay to make significant changes or' 'adjustments' in proposed project operations without disclosing and assessing those changes and adjustments in a new Draft Plan and Draft EIR/EIS."

Wright emphasized that BDCP agencies have the opportunity to instead "take a different path" and gave a list of corrective actions the agencies can take.

"The fish and the Delta are in peril," Wright concluded, "Extinction is forever. The 40,000 pages of BDCP project proponent advocacy are unworthy of the epic decisions to be made guiding the future of the fish, northern California Rivers, and the Delta. If this is not worth the environmental full disclosure required by law and the NEPA, CEQA and ESA required do-over, what is?"

BDCP background: Governor Jerrry Brown's Bay Delta Delta Conservation Plan to build the 35-mile long peripheral tunnels won't create one drop of new water, but the project will lead to horrendous environmental degradation, according to tunnel critics. The construction of the tunnels, estimated to cost $67 billion, will hasten the extinction of Central Valley Chinook salmon, Delta and longfin smelt and other fish species, as well as imperil the salmon and steelhead populations on the Trinity and Klamath rivers.

Friends of the River and other BDCP opponents say Brown's "legacy" project will destroy the largest estuary on the West Coast of the Americas that provides a nursery for many species. It will harm salmon, halibut, leopard shark, soupfin shark, sevengill shark, anchovy, sardine, herring, groundfish and Dungeness crab populations stretching from Southern Washington to Southern California.

The tunnels are being constructed in tandem with the federal government's plan to raise Shasta Dam, a project that will flood many of the remaining sacred sites of the Winnemem Wintu Tribe that weren't inundated by Shasta Dam.
Add Your Comments
Support Independent Media
We are 100% volunteer and depend on your participation to sustain our efforts!