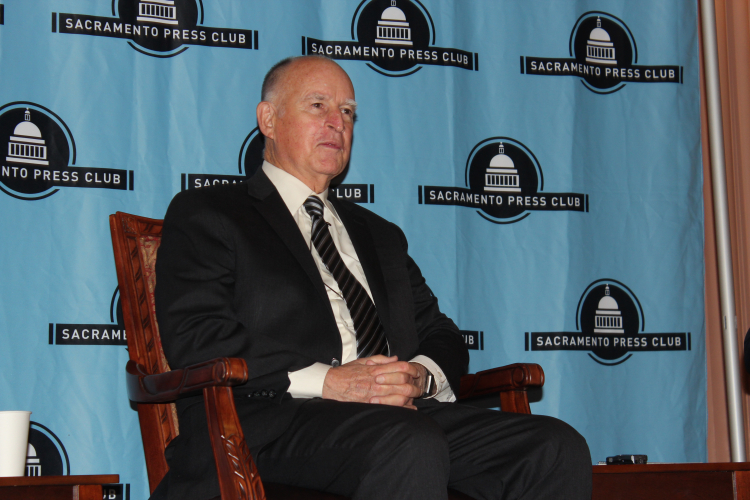 original image (5184x3456)
At an event at the Sacramento Press Club that I attended on December 18 entitled, “Jerry Brown, the Exit Interview,” Brown reflected on his five decades in public office, the state of political discourse in the country and the future of California.

After journalist and author Miriam Pawel and Los Angeles Times columnist George Skelton asked Brown a number of wide-ranging questions, during the question and answer period, KCRA 3 asked him about what would happen to his two biggest projects, the Delta Tunnels and High Speed Rail, after he leaves the Governor’s Office in January.

“They’ll be built in a timely responsible way,” Brown said in reference to both projects.

“There's no real objection to the idea of a conveyance around the Delta,” said Brown, dismissing the massive opposition and pile of lawsuits by a plethora of counties, cities, Tribes, fishing groups, environmental justice advocates, Delta residents, family farmers, conservation groups and elected officials to the the project. “The Delta will be destroyed unless we build some sort of peripheral canal or tunnel.”

The Governor also said those who fear that the water contractors will pump too much out of the Delta after the tunnels were constructed “would be constrained by our wise water laws.”

The day after Governor Brown said the Delta Tunnels will be built, documents released to the Planning and Conservation League via a California Public Records Act request revealed the details of the controversial l“No Harm Agreement” between the California Department of Water Resources (DWR) and the Federal Bureau of Reclamation (the Bureau) regarding California WaterFix, according to a press release from Restore the Delta (RTD).

Also included in the document release was a “Letter of Dismissal,” a document demanding that specific water districts and local government agencies abandon their case-in-chiefs opposing WaterFix before the State Water Resources Control Board (SWRCB). This was not previously reported in media accounts of the water deal cut between the Brown and Trump administrations, You can read both documents hereand here.

The “Letter of Dismissal” — a statement of DWR’s expectations of specific parties to withdraw from WaterFix hearings — does not indicate that the listed parties have agreed to the terms asserted by the Department of Water Resources within the letter itself, according to Barbara Barrigan-Parrilla-Parrilla, Executive Director of Restore the Delta.

“The ‘Letter of Dismissal’ by DWR’s Karla Nemeth addressed to specific parties participating in the WaterFix hearings reads like a “surrender Dorothy” demand – absolute in its insistence without any indication of interest in cooperation by the listed parties,” said Barrigan-Parrilla. “It seems like Governor Brown’s final grand water bargain is an attempt to bully protesting parties into capitulation, and a presentation of alternative facts in side deals that do not match up with what is transpiring before the SWRCB regarding the future of the San Francisco Bay-Delta estuary.”

She also noted that while the “No Harm Agreement” reads on the surface simply as a deal cut between DWR (the junior water rights holder) and the Bureau of Reclamation (the senior water rights holder), details contradict DWR’s case-in-chief before the State Water Resources Control for the WaterFix tunnels, calling the accuracy of the assumptions in the “No Harm Agreement” into question.

In the fourth paragraph under Explanatory Recitals, the agreement states:

“Yet, in their case-in-chief before the SWRCB, DWR and the Bureau have petitioned for a change-in-the-point of diversion permit to begin construction of the Delta tunnels, not an addition for points of diversion,” said Barrigan-Parrilla. “An addition of diversion points for the SWP and the CVP would require the Brown and Trump administrations to seek new water rights from the Delta and would have required a different case presentation with different facts to the SWRCB. DWR’s argument has been that they already obtained the water rights for the project, despite proposing that the intakes should be located in new places with the Delta. RTD and other parties made the case that DWR’s permit to continue adding diversion capability to the State Water Project expired in December 2009, which DWR never refuted.”

Restore the Delta’s Policy Analyst, Tim Stroshane, added, “The ‘No Harm Agreement’ reveals the Bureau asserting its seniority in the Delta to protect its water contractors’ deliveries from overreach by DWR’s Tunnels operations (assuming the project is built). These agreements undermine DWR’s case before the Water Board that they’re proceeding arm-in-arm with the Bureau on this project, when the agreements reveal that Reclamation and its CVP contractors view the Tunnels project with fear and hostility. There may not be any rush to surrender as DWR hopes.”

“I sense desperation on the part of the Governor here, for which he may or may not have good Latin phrases. It would be nice for all others to celebrate the holidays instead and let this die on the vine,” Stroshane concluded.

Photo: Governor Brown ponders a question at the Sacramento Press Club event on December 18. Photo by Dan Bacher.
Add Your Comments
Support Independent Media
We are 100% volunteer and depend on your participation to sustain our efforts!