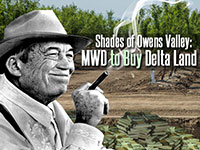 In the classic movie Chinatown the villain and the head of the water district played by the late John Huston says, "Either you bring the water to L.A. or you bring L.A. to the water". In a scenario eerily reminiscent of a scene in the film, when the LA Department of Power and Water buys up land in the Owens Valley in order to seize Owens River water, the Metropolitan Water District of Southern California is considering purchasing land in the imperiled Delta to "bring L.A. to the water".

The parcels consist of four islands - Webb Tract, Bouldin Island, Holland Tract and Bacon Island - that are now in agricultural production. The total acreage of the parcels is 20,000 acres. They are controlled by Zurich American Corporation, the U.S. subsidiary of a Swiss insurance company.