Add an Event
Newswire
Calendar
Features
Home
Donate
From the Open-Publishing Calendar
From the Open-Publishing Newswire
Indybay Feature
Publish to Newswire
Add an Event
Related Categories: California | Central Valley | Environment & Forest Defense | Government & Elections
Tunnel opponents blast Governor's revised Bay Delta Conservation Plan
by Dan Bacher
Friday May 1st, 2015 9:35 AM
Critics of the tunnels slammed the revised tunnel plan for a number of severe flaws after reviewing the released documents. Bill Jennings, Executive Director of the California Sportfishing Protection Alliance and Board Member of the California Water Impact Network (C-WIN) and Executive Committee Member of Restore the Delta, summed up the reactions of many to the revised plan when he said, "The Water Fix and Eco Restore‬ are Ecocide for the Delta." 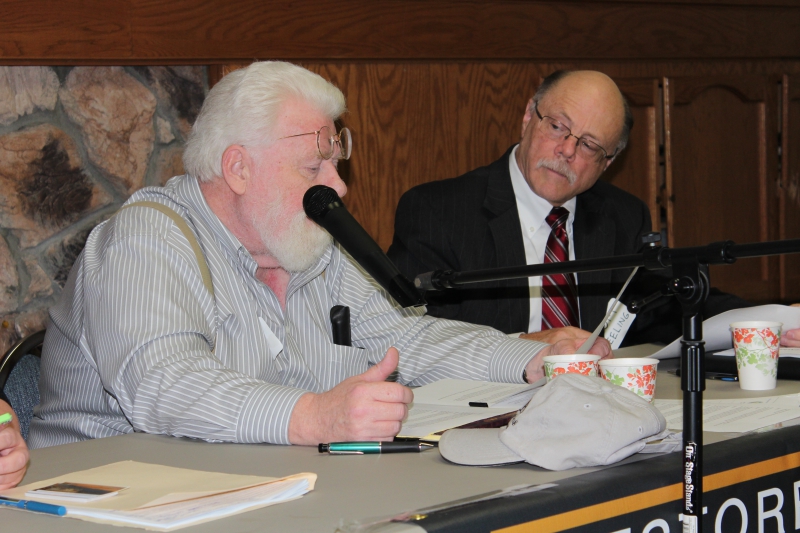 On April 30 at a press conference in Oakland, Governor Jerry Brown and federal officials unveiled controversial plans that they claim "accelerate restoration of the Delta's ecosystem" and "fix the state's aging water infrastructure" by building two massive underground tunnels.

Environmental groups and Delta advocates responded that the updated Bay Delta Conservation Plan (BDCP) is nothing more than a "slightly revised" water grab for corporate agribusiness interests - and is "more unfair than ever" for the majority of Californians during the record drought.

One of the key differences between the previous version of the BDCP and the latest incarnation is that it now calls for only "restoring" 30,000 acres for wetland and wildlife habitat - down from the 100,000 acres originally proposed.

“We can't just cross our fingers, hoping for the best in the Delta,” said Governor Brown in touting the revised plan. “Fish populations are at an all-time low. Bold action is imperative."

"We've listened to the public and carefully studied the science," echoing his comments that he made regarding the tunnels plan at a press conference in Sacramento in July 2012.

"This revised plan is the absolute best path forward," stated Brown, without offering evidence how this plan compared to other more comprehensive solutions to California's water supply and ecosystem restoration problems, most notably the Environmental Water Caucus Responsible Exports Plan that sets a cap of 3 million acre feet per year on water exports from the Delta.

Deputy Secretary of the Interior Michael L. Connor claimed, “The State, through Governor Brown’s leadership, has been a strong partner working with us to improve California’s water infrastructure while restoring the Delta. The plan announced today, which has been greatly improved in response to public input, will secure California’s water future and a healthier, sustainable Bay-Delta ecosystem."

The Governor claimed the revised plan "substantially improves the health of California’s fisheries, increases water reliability and addresses the uncertainty of climate change."

Revised plan is "Ecocide" for the Delta

Critics of the tunnels slammed the revised tunnel plan for a number of severe flaws after reviewing the released documents. Bill Jennings, Executive Director of the California Sportfishing Protection Alliance (CSPA) and Board Member of the California Water Impact Network (C-WIN) and Executive Commitee Member of Restore the Delta, summed up the reactions of many to the revised plan when he said, "The Water Fix and Eco Restore‬ are Ecocide for the Delta."

Adam Scow, the California Director of Food and Water Watch, said the revised tunnels plan remains a scheme to provide subsidized water for "Big Agriculture" that has expanded its water-intensive almond acreage during the drought while urban water users are asked to cut their water usage by 25 percent and more.

"Governor Brown’s plan to build massive tunnels to divert the Sacramento River away from the San Francisco Bay Delta – estimated to cost as much as $67 billion – has always primarily been a scheme to send massive amounts of water to corporate agribusinesses on the west side of the Central Valley," said Scow. "These powerful agribusinesses, including Stewart Resnick’s Paramount Farms and growers in the Westlands Water District, have planted excessive amounts of water-thirsty almonds and pistachios, most of which are exported overseas and need massive amounts of water to succeed in the hot and dry climate of the west side."

“The Governor has slightly repackaged his euphemistically named Bay Delta Conservation Plan, because the tunnels plan will likely not meet federal water quality standards in the Bay Delta, but the fundamental problem with the project remains: it is grossly unfair for the Governor to make California taxpayers and water ratepayers subsidize a massive project that only benefits a handful of California’s most powerful agribusinesses," he stated.

"Forcing taxpayers to subsidize agribusiness is especially wrong now that the Governor has demanded all Californians reduce their own water use or face substantial fines. In addition, removing fresh water from the Bay Delta via tunnels will only worsen conditions for California’s threatened wild salmon," said Scow.

Scow urged the Governor to impose limits on the amount of water that is used by agribusiness interests on the San Joaquin Valley's west side.

“Instead of pushing this outdated tunnels project, the Governor should limit agricultural irrigation on the west side and stop sending enormous amounts of public water to agriculture tycoons at the expense of California taxpayers and the fragile ecosystem and fish populations supported by the San Francisco Bay Delta," concluded Scow.

Restore the Delta (RTD) responded to Gov. Brown’s "abandonment of habitat restoration" in his Bay Delta Conservation Plan (BDCP) tunnels scheme by saying the new plan violates the statutory co-equal goals and "end-runs" the EPA and federal scientists who refused to issue permits for the project.

Governor Brown has called the massive change “technical,” but RTD and other opponents said it results from "fatal flaws" in the BDCP and the lack of funding for the restoration formerly proposed under the BDCP.

The agencies found in particular that the project would "jeopardize," rather than help recover key species, and violate anti-degradation laws to protect the Delta waterways as fishable, swimmable and drinkable, according to RTD.

RTD said the change also results from the failure of the BDCP to identify the required funding to meet the financial assurances provisions of the ESA, RTD noted. The BDCP relied heavily on future unidentified state bonds and state and federal budget allocations.

Barbara Barrigan-Parrilla, RTD Executive Director, pointed out, "Though a key promise made to pass the 2014 Water Bond was that it would not fund the BDCP, the administration has now indicated it does intend to take Prop. 1 funds for restoration to attempt to address the damage from over pumping the Delta, which the tunnels would compound."

The 12-page fact sheet confirms the contention of Barrigan-Parrilla and other tunnel opponents that the water bond will fund "restoration" to mitigate the environmental damage caused by the tunnels.

Page 1 of the document reveals that 1,000+acres out of the more than 30,000 acres of "Delta Habitat Restoration and Protection" will be funded by Prop. 1 and Pro. 1E

The fact sheet states, "Various aquatic, riparian, and upland restoration and multi-benefit flood management projects will be supported by Proposition 1 and 1E."

Osha Meserve, an attorney for Delta agricultural and environmental interests, also noted, “28,000 acres out of the total 30,000 acres of habitat now proposed under EcoRestore is already required of the state and federal projects by the 2009 Biops (biological opinions) to mitigate impacts of operating their existing diversions in the south Delta. The water exporters appear to be using the so-called 'EcoRestore' project to reduce their current financial obligations and instead foist that cost onto the public.” (https://s3.amazonaws.com/californiawater/pdfs/ECO_FS_Overview.pdf)

New plan even worse than previous one

Bob Wright, senior counsel for Friends of the River, slammed the revised Bay Delta Conservation Plan also, saying that the new plan is "even worse" for people and the environment than previous one was.

“After 9 years and $250 million dollars, creating a stack of planning documents over 27 feet tall, the governor has admitted that the BDCP could not protect Delta species and therefore could not meet HCP and NCCP standards,” said Wright. “The BDCP, a plan that conserved little and would cost ratepayers and taxpayers over 25 Billion dollars to subsidize giant unsustainable agribusiness, is now even worse for the people, the environment, and sustainable water policies.”

Wright noted that the BDCP was previously designed as an HCP/NCCP to purportedly “…restore and protect ecosystem health, water supply, and water quality within a stable regulatory framework.” As an HCP/NCCP, the BDCP was required to protect endangered species and prevent their decline.

“The plan has now shifted from a proposal to protect 56 Species, and over 100,000 acres of habitat, to a straight water grab that would take up to half of the freshwater from the north end of the Delta,” added Barrigan-Parrilla. “The governor plans to do an end-run around the public, the federal agencies that flunked the project, and the Legislature, with a fast-tracked section 7 process for permitting the tunnels. Under section 7, the project only needs to mitigate for direct project impacts, and does not have to meet a recovery standard.”

“The tunnels would create permanent drought conditions in the Delta by diverting up to half of the freshwater flows, which will increase salinity intrusion into the Delta and help push several species to extinction,” Barrigan-Parrilla said.

For more information, go to: http://restorethedelta.org/blog/

The recent abandonment of the pretense of "restoration" and "conservation" under the BCCP is part of a larger pattern by the Brown administration, a regime that has pushed some of the most anti-fish and anti-environmental policies of any administration in California history. This is a huge story that the mainstream media and much of the alternative media have failed to cover. (http://www.truth-out.org/speakout/item/30452-the-extinction-governor-rips-the-green-mask-off-his-tunnels-plan)

The Brown administration, in collaboration with the Obama administration, has presided over record water exports out of the Delta and record deaths of Sacramento splittail and other species in 2011; the collapse of Delta smelt and other fish species to record low levels in 2014 and 2015; the death of 95 percent of endangered winter run Chinook salmon in low, warm water conditions in 2014; the creation of questionable "marine protected areas" created under the helm of a Big Oil lobbyist; and the clearcutting of forests in the Sierra Nevada.

Caleen Sisk, Chief and Spiritual Leader of the Winnemem Wintu Tribe, said the water bond, peripheral tunnels, Shasta Dam raise and other water projects now being planned by the state and federal governments are in in reality "one Big Project" that will destroy salmon, rivers and groundwater supplies. (http://www.truth-out.org/speakout/item/27216-chief-caleen-sisk-it-s-all-one-big-project)

Meanwhile, the mainstream media continues to portray Brown as a "climate leader" and "green energy" guru when in fact he is a strong proponent of neoliberal carbon trading policies and the expansion of the environmentally devastating practice of fracking in California. (http://www.nytimes.com/2015/04/30/us/california-governor-orders-new-target-for-emissions-cuts.html?_r=0)
http://www.indybay.org/newsitems/2015/05/01/18771746.php
§Osha Meserve
by Dan Bacher Friday May 1st, 2015 9:35 AM 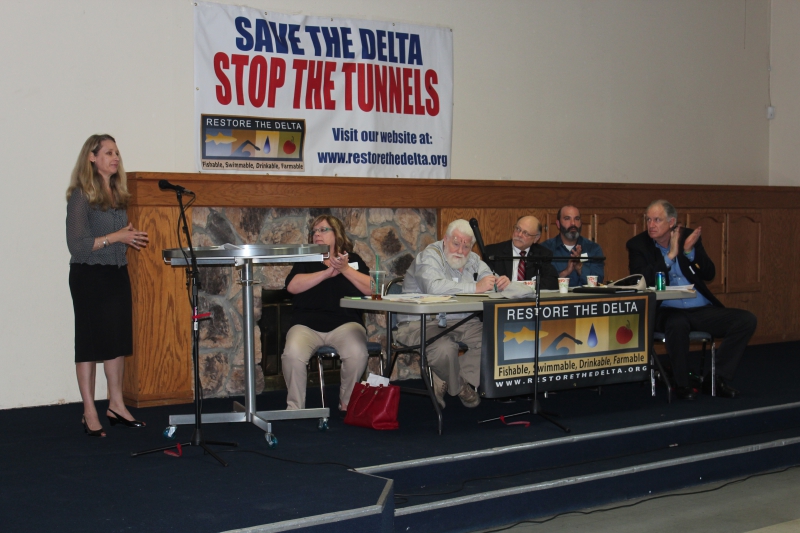 original image (5184x3456)
Osha Meserve, attorney for Local Agencies of the North Delta, speaks at the Restore the Delta statewide general membership no tunnels meeting in Stockton on April 30. Photo by Dan Bacher.
Add Your Comments
LATEST COMMENTS ABOUT THIS ARTICLE
Listed below are the latest comments about this post.
These comments are submitted anonymously by website visitors.