Add an Event
Newswire
Calendar
Features
Home
Donate
From the Open-Publishing Calendar
From the Open-Publishing Newswire
Indybay Feature
Publish to Newswire
Add an Event
Related Categories: California | Central Valley | Environment & Forest Defense | Government & Elections
Protesters slam LA funding of Delta tunnels for Big Ag tycoons
by Dan Bacher
Monday Aug 24th, 2015 8:15 AM
"Resnick, a billionaire agriculture tycoon who controls vast amounts of California water, is pushing the controversial tunnels in an attempt to secure more water for Central Valley corporate agriculture interests and dupe Californians into paying for massive tunnels that won’t secure new water for Angelenos," said Brenna Norton of Food and Water Watch, who spoke at the protest. "Food & Water Watch estimates the average household could be charged as much as $5000 to pay for the project."

Photo of protesters in front of The Wonderful Company's corporate offices on August 19 courtesy of Food & Water Watch. 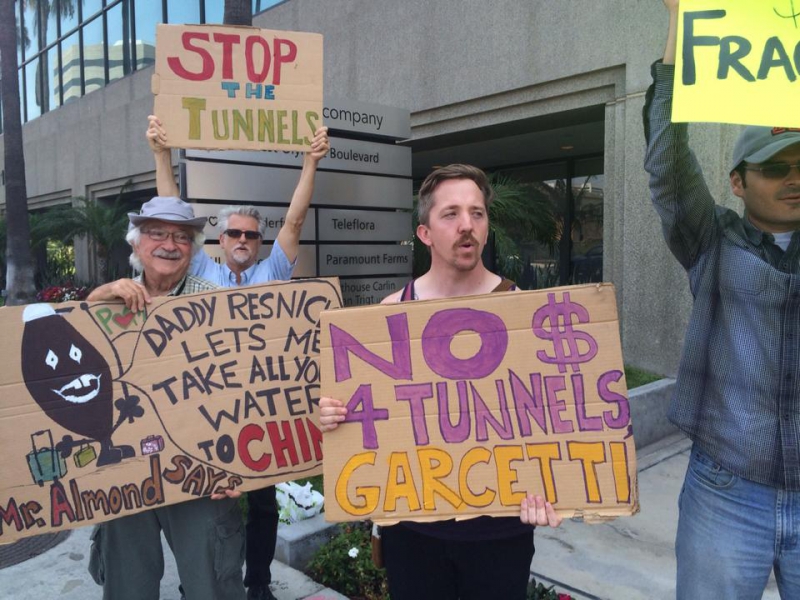 Outside the plush Los Angeles headquarters of agribusiness tycoon Stewart Resnick on August 19, 25 protesters chanted, "Hey Hey, Ho Ho, Corporate Greed has got to go" and “Mayor Garcetti, have some will. Don’t let Resnick raise our bills.”

The tunnels opponents held their rally outside the corporate headquarters of The Wonderful Company, owned by Stewart and Lynda Resnick, to expose the Resnicks' campaign to promote the "California Water Fix," formerly known as the Bay Delta Conservation Plan (BDCP). The Resnicks in June unveiled their company's new name, the Wonderful Company, to replace the old corporate name, Roll Global. (http://www.eastbayexpress.com/SevenDays/archives/2015/06/03/influential-ag-firm-changes-name-corporation-to-the-wonderful-company-gov-brown-wants-to-change-tunnels-to-pipes)

Protesters wore giant “almond” and “POM Wonderful" face cut outs in an effort to depict how the Resnicks are pushing the tunnels plan to benefit their almond and cash crop empire. LA ratepayers also held a number of colorful signs, incuding ones saying, “No LA dollars for Big Ag Tycoons," "Stop the Tunnels," "No $ For Tunnels Garcetti," and "Tunnels = Corporate Welfare."

The rally took place during a record drought in California, one that has been badly aggravated by state and federal government mismanagement of Trinity, Shasta, Oroville, Folsom and other northern California reservoirs. The event was also held as the State is accepting public comments on the multibillion project that will hasten the extinction of Sacramento River Chinook salmon, Central Valley steelhead, Delta and longfin smelt and green sturgeon, as well as imperil salmon and steelhead populations on the Trinity and Klamath rivers.

"Resnick, a billionaire agriculture tycoon who controls vast amounts of California water, is pushing the controversial tunnels in an attempt to secure more water for Central Valley corporate agriculture interests and dupe Californians into paying for massive tunnels that won’t secure new water for Angelenos," said Brenna Norton of Food and Water Watch, who spoke at the protest. "Food & Water Watch estimates the average household could be charged as much as $5000 to pay for the project."

Other speakers at the rally besides Norton included Adam Scow, the California Director of Food and Water Watch, and Conner Everts, from the Southern California Watershed Network.

"As Governor Brown and his powerful agricultural allies continue to attempt to sell this boondoggle project to California, it is critical for Mayor Garcetti to oppose any water rate hike or other L.A. funding for the tunnels," she explained. "The project comes at a time when LADWP needs to invest billions into fixing the aging pipes and water infrastructure beneath the city."

Food & Water Watch and other groups oppose the tunnels as a "massive and unfair waste of ratepayer money" at a time when better and more crucial infrastructure investments are needed.

Norton also noted that at a time when Californians are being forced to slash their water use, Resnick has "vowed to expand his agribusiness empire that already depends on taxpayer subsidized water - and is poised to benefit from even greater subsidies via rate hikes to finance the tunnels."

In addition, she said Stewart Resnick's corporation has been financing advertisements in support of the project, recently renamed the “California Water Fix" by the Brown and Obama administrations.

As the Brown administration mandated that urban users slash their water use, Stewart Resnick in March revealed his current efforts to expand pistachio, almond, and walnut acreage during a record drought at this year’s annual pistachio conference hosted by Paramount Farms.

The Koch Brothers of California Water

The Resnicks have been instrumental in promoting campaigns to eviscerate Endangered Species Act protections for Central Valley Chinook salmon and Delta smelt populations, as well as to build the fish-killing Delta Tunnels and pass Jerry Brown's corporate water grab, the Proposition 1 water bond. Last year at a rally against Proposition 1 in front of the Resnick's mansion in Beverly Hills, environmentalists and anglers accused the Resnicks of being the "Koch Brothers of California Water."

Barbara Barrigan-Parrilla, executive director of Restore the Delta, exposed the enormous influence of the Resnicks and the Westlands Water District on the water and fish policies of Governor Jerry Brown and his predecessors in an April 2014 op-ed in the San Francisco Chronicle. The Resnicks made $270,000 in contributions to Gov. Arnold Schwarzenegger, $350,000 to support Gov. Gray Davis, and $102,000 to Gov. Jerry Brown, according to Barrigan-Parrilla. (http://www.sfgate.com/opinion/article/Billionaires-influence-felt-in-state-s-water-5430496.php)

“As a result of the political influence of billionaires who receive taxpayer-subsidized water, the state Department of Water Resources functions almost as a subsidiary of the water exporters,” she said.

The Resnicks also contributed $150,000 to Proposition 1 last fall. They joined a who's who of corporate interests in California, including other corporate agribusiness interests, timber barons, Big Oil, Big Tobacco, the health insurance industry and other Big Money interests, that contributed over $21.8 million to the successful campaign to pass Governor Brown's water bond. (http://www.eastbayexpress.com/SevenDays/archives/2015/04/29/why-governor-brown-broke-his-prop-1-promise-big-money-interests-dumped-218-million-into-the-prop-1-campaign)

The wealthy agribusinessman also wears another hat - "environmental leader." Yes, Resnick serves on the board of directors of Conservation International, a corporate "environmental" NGO noted for its top-down approach to conservation and involvement with corporate greenwashing throughout the world. (http://www.conservation.org/about/pages/board-of-directors.aspx)

Stewart Resnick sits on the board with Rob Walton, the Chairman of the board's Executive Committee. Walton, the oldest child of Sam and Helen Walton, is Chairman (Retired) of the Board of Wal-Mart Stores, Inc.

However, while serving on the board of Conservation International, Resnick become notorious for buying subsidized Delta water and then selling it back to the public for a big profit as Delta fish and Central Valley salmon populations crashed.

“As the West Coast’s largest estuary plunged to the brink of collapse from 2000 to 2007, state water officials pumped unprecedented amounts of water out of the Delta only to effectively buy some of it back at taxpayer expense for a failed environmental protection plan, a MediaNews investigation has found,” according an article by the late investigative reporter Mike Taugher in the Contra Costa Times on May 23, 2009. (http://www.revivethesanjoaquin.org/content/pumping-water-and-cash-delta)

Taugher said the environmental water account set up in 2000 to “improve” the Delta ecosystem spent nearly $200 million mostly to benefit water users while also creating a “cash stream" for private landowners and water agencies in the Bakersfield area.

“No one appears to have benefited more than companies owned or controlled by Stewart Resnick, a Beverly Hills billionaire, philanthropist and major political donor whose companies, including Paramount Farms, own more than 115,000 acres in Kern County,” Taugher stated. “Resnick’s water and farm companies collected about 20 cents of every dollar spent by the program.”

Resnick and his wife, Lynda, own The Wonderful Company, formerly Roll Global, a Los Angeles-based holding company that includes both global agricultural operations and well-known brands. The Resnicks' companies include Paramount Citrus, Paramount Farming, and Paramount Farms, the world’s largest growers, processors, and marketers of citrus, almonds, and pistachios.

One of the largest private water brokers in the U.S., The Wonderful Company makes millions of dollars in profits off marketing subsidized public water back to the public, confirmed independent journalist Yasha Levine.

“Through a series of subsidiary companies and organizations, Roll International is able to convert California’s water from a public, shared resource into a private asset that can be sold on the market to the highest bidder,” said Levine in “How Limousine Liberals, Water Oligarchs and Even Sean Hannity are Hijacking Our Water” on alternet.org. (http://www.alternet.org/story/144020/how_limousine_liberals,_water_oligarchs_and_even_sean_hannity_are_hijacking_our_water_supply)

Last year, Lois Henry of the Bakersfield Californian revealed how the Resnicks have made a profit selling water from the Kern County Water Bank, through a complicated series of maneuvers, to supply a 2,000 acre development called Gateway Village in Madera County. (http://www.bakersfield.com/news/2013/12/15/lois-henry-how-water-from-kern-grows-sprawl-in-madera.html)

The Resnicks are known for the influence they have exerted over California politicians from both the Democratic and Republican parties, including former Governor Arnold Schwarzenegger, Governor Jerry Brown, Senator Dianne Feinstein, former Senate President Pro Tem Darrell Steinberg and others, through campaign contributions. (http://www.indybay.org/newsitems/2010/02/15/18637867.php)

The Coalition for a Sustainable Delta, the Resnicks' Astroturf group

The Resnicks exert their influence over California politics in other ways besides direct contributions to political campaigns and the manipulation of environmental and water regulations for their own profit. For example, the executives of Paramount Farms have also set up an Astroturf group, the Coalition for a Sustainable Delta, that engages in greenwashing campaigns such as one blaming striped bass, rather than water exports, for salmon and other fish declines.

The Resnicks, through their foundation, are well known for their contributions to the arts and charities, as well as the millions donated to the Resnick Program for Food Law and Policy at UCLA.(https://www.law.ucla.edu/centers/social-policy/resnick-program-for-food-law-and-policy/about/)

However, very few are aware that Stewart Resnick also sits on the Board of Advisors of UC Davis Chancellor Linda Katehi, made famous for serving as Chancellor when UC Davis Police Lt. John Pike pepper sprayed students during the Occupy protests in the fall of 2011. Resnick and his wife have managed to use their wealth not only to exert enormous influence over water politics in California, but over the educational sphere as well. (http://chancellor.ucdavis.edu/initiatives/board_of_advisors/resnick_bio.html)

The Resnicks' enormous influence over environmental and educational policies in the state is a classic example of how the regulated have been able to capture the regulatory apparatus in California. To combat this regulatory capture, it is essential that people back efforts to get the corporate money out of politics, including the Move to Amend and 99Rise campaigns.

To read the UK Guardian's coverage of the protest against the Resnicks' nut empire, go to: http://www.theguardian.com/us-news/2015/aug/21/california-water-drought-almond-pistachio-tunnel
§Meet the Resnicks
by Dan Bacher Monday Aug 24th, 2015 8:15 AM 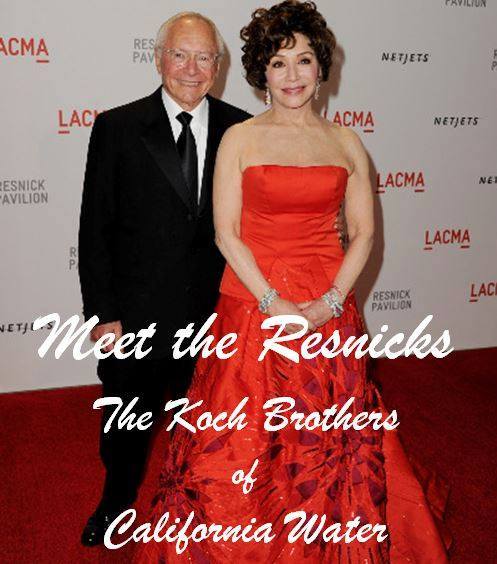 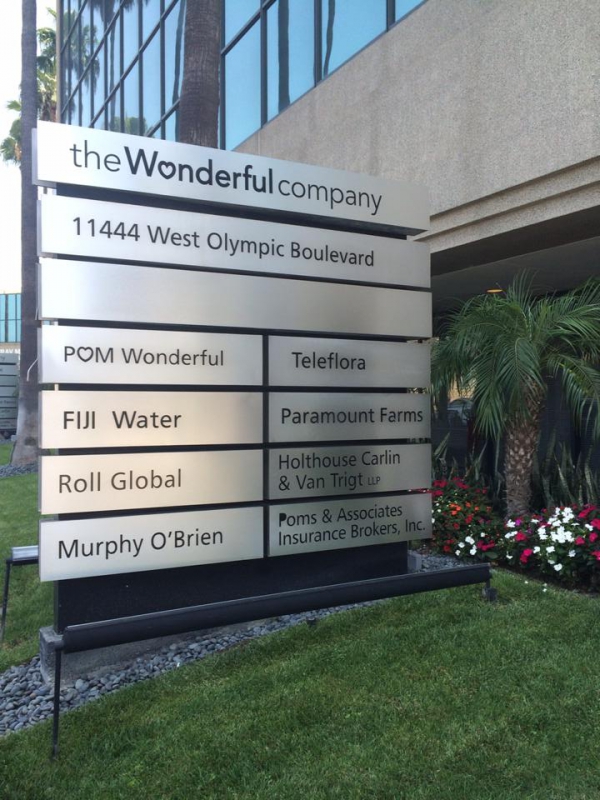 original image (720x960)
The corporate headquarters of The Wonderful Company in Los Angeles. Photo courtesy of Food & Water Watch.
Add Your Comments
LATEST COMMENTS ABOUT THIS ARTICLE
Listed below are the latest comments about this post.
These comments are submitted anonymously by website visitors.