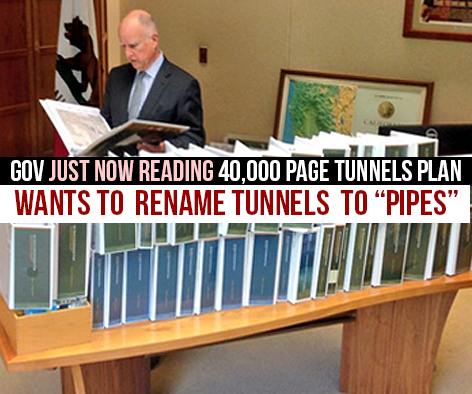 In 1982, Jerry Brown called his unpopular scheme to divert more water to corporate agribusiness and Southern California water agencies the "peripheral canal." The voters of the state overwhelmingly rejected the canal proposal in the November election.

After Brown was inaugurated for his third term as Governor in 2011, he described the reincarnated "conveyance" plan proposed under the Bay Delta Conservation Plan (BDCP) as the Delta "tunnels."

Now the Governor, in his fourth term, wants to change the name of the widely-opposed project to "pipes."

In addressing Sacramento business leaders at the 90th Annual "Sacramento Host Breakfast" on May 28, Governor Jerry Brown said that he is now going to call the Delta tunnels, "pipes," because pipes are more popular.

"Instead of a tunnel, were going to call it a pipe. That seems to be more popular," he said to laughter from the crowd, according to the Sacramento Bee. (http://www.sacbee.com/news/politics-government/capitol-alert/article22541730.htm)

Apparently, Brown has been not watching the media coverage of the massive Santa Barbara oil spill. The disaster is the result of a rupture in one of these “ever-popular” pipes, owned by the Plains All-American Pipeline corporation, on May 19 off Refugio State Beach. The "pipe" concept is so "popular" off Santa Barbara now that a "Stand In The Sand" protest yesterday drew over 500 people!

Whether he calls them "tunnels," "pipes," a "canal" or some other term, we all know that they are in reality a Big Water Grab for Stewart Resnick of Paramount Farms, Westlands Water District, Southern California water agencies, and oil companies conducting steam injection and fracking operations. The Brown administration recently divided the controversial Bay Delta Conservation Plan into two components - The "California Water Fix" component for the tunnels and the "California Eco Restore" component for the habitat "restoration" component.

Restore the Delta (RTD), a group opposing the Governor's massive twin tunnels plan, noted that Brown's reference to "pipes," and his entire talk touting the alleged "benefits" of the tunnels, echoes the message created by Californians for Water Security — a special interest campaign initiated by Stewart Resnick’s Paramount Farms.

In case you didn't know, Stewart Resnick is the largest orchard fruit and nut grower in the world, and is one of the biggest contributors to candidates from both the Democratic and Republican parties every election season. He contributed $150,000 last fall to help pass Jerry Brown's Proposition 1, the water bond. (http://www.eastbayexpress.com/SevenDays/archives/2015/04/29/why-governor-brown-broke-his-prop-1-promise-big-money-interests-dumped-218-million-into-the-prop-1-campaign)

The well-connected Beverly Hills billionaire sits on the board of the Conservation International, a controversial corporate "environmental" group, and is an advisor to UC Davis Chancellor Linda Katehi, most well-known around the world for her administration's pepper spraying of students at an Occupy protest in the fall of 2011. (http://www.dailykos.com/story/2015/05/05/1382549/-Stewart-Resnick-is-on-UC-Davis-Chancellor-s-Board-of-Advisors)

“The strategy of Californians for Water Security and the new California Water Fix is to take Californians’ real concerns about our need to fix our leaky water mains and aging urban infrastructure in earthquake prone places like Los Angeles and wrap those fears into the Delta project to divert the Sacramento River from the Bay-Delta estuary, depriving the Delta of its primary freshwater source,” said RTD Executive Director Barbara Barrigan-Parrilla.

“Whether it’s a peripheral canal, twin tunnels, or now pipes, it’s the same old project. Changing the lipstick shade one puts on a pig, doesn’t make the pig any more attractive,” she noted. “The Delta canals/tunnels/pipes will destroy the largest estuary on the west coast of the Americas. They will ruin the environment and economy for the 4 million residents of the Delta counties. They will finish off our salmon runs and other native fish species which are barely hanging on from years of over pumping.”

"The tunnels will become financial burdens for water rate payers and property tax payers in Los Angeles and Silicon Valley. They will leave the 500,000 customers of the Contra Costa Water District with drinking water that will not meet Clean Water Act standards. They will ruin the $5.2 billion annual family farm community," she explained.

“They will not provide urban residents with any additional water, but they will ensure that the mega growers like Stewart Resnick and those in Westlands who can spend millions on lobbyists and misleading messaging campaigns get the water they want to grow almonds on drainage impaired lands in the desert. It’s time for Governor Brown to stop carrying water for special interests and to show leadership in creating water programs that benefit ALL Californians,” she concluded.

For more information about Restore the Delta (RTD), go to: http://restorethedelta.org

The construction of the Delta tunnels would hasten the extinction of Sacramento River Chinook salmon, Central Valley steelhead, Delta and longfin smelt and other fish species, as well as threaten the steelhead and salmon populations on the Trinity and Klamath rivers.

The tunnels plan is just one of Jerry Brown's many attacks on fish, water and the environment. Unfortunately, most in the mainstream media continue to falsely portray Brown as a "green" Governor as they fall for his constant grandstanding about his "green energy" and neo-liberal carbon trading policies. For an in-depth analysis of Brown's environmental record, read my article: http://www.truth-out.org/speakout/item/30452-the-extinction-governor-rips-the-green-mask-off-his-tunnels-plan