Add an Event
Newswire
Calendar
Features
Home
Donate
From the Open-Publishing Calendar
From the Open-Publishing Newswire
Indybay Feature
Publish to Newswire
Add an Event
Related Categories: California | Central Valley | Environment & Forest Defense | Government & Elections | Racial Justice
Groups Demand More Time for Review of Jerry Brown's Delta Tunnels Plan
by Dan Bacher
Friday Jul 17th, 2015 10:42 AM
The letter concluded, "In sum, the current comment period is inadequate because it fails to provide members of the public with adequate time for review. The proposed project is the most controversial public works project in California history. It is extremely complicated and the subject of voluminous analysis in the form of project justification and advocacy." 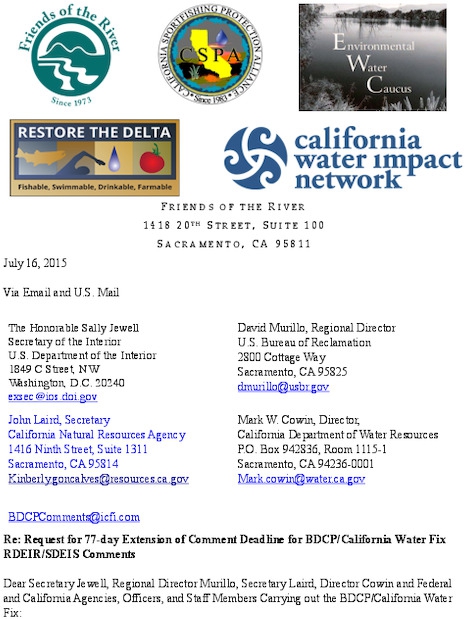 In their zeal to rush the controversial Delta tunnels plan through, the Brown and Obama administrations are doing everything they can to limit and suppress public comment on the revised EIS/EIS for the plan, potentially the most environmentally destructive public works project in California history.

The California Department of Water Resources and U.S. Bureau of Reclamation imposed a public comment period of only 45 business days last Thursday when they announced the release of the revised documents. Comments are due by close of business Monday, August 31, 2015.

On July 16, a broad coalition of environmental and community organizations and California Indian Tribes demanded more time for the public to consider the controversial - and widely-criticized - public works project.

“The short public comment period looks like a deliberate effort to make it virtually impossible for members of the public to be able to comprehend and respond with meaningful comments on the new NEPA and CEQP document," the groups said in the letter. "The BDCP agencies took almost one year to prepare the new documents and there is no public need for haste in providing too short a comment period.”

The groups emphasized that despite more than 18,000 public comments on the original draft EIR/EIS, and despite repeated requests since December 2013, officials have refused to post any of the detailed comments by organizations or public agencies on the BDCP website.

“This deliberate concealment of independent and contrary views and information from the public also now makes it more difficult for the public to prepare meaningful comments on the new NEPA and CEQA documents. Moreover, comments such as those from the EPA and Army Corps constitute critical new information that would be the foundation for many informed comments at this time," the letter explained.

The letter also noted that the Department of Water Resources has declared it will not produce technical documents requested by public interest groups until August 28, 2015, just three days before the 45-day comment period ends.

The letter concluded, "In sum, the current comment period is inadequate because it fails to provide members of the public with adequate time for review. The proposed project is the most controversial public works project in California history. It is extremely complicated and the subject of voluminous analysis in the form of project justification and advocacy. The subject is critically important to every Californian. We therefore request the additional time necessary to attempt to carefully scrutinize the subject NEPA and CEQA documents and then provide meaningful input by way of public comment."

You can read the letter here: http://www.friendsoftheriver.org/site/DocServer/7_16_15_comment_time_ext_req.pdf?docID=10261

The agencies recently divided the Bay Delta Conservation Plan (BDCP) to build the twin tunnels into two new components - California Water Fix, the conveyance part of the project, and California Eco Restore, the habitat "restoration" component. However, tunnels critics note that the "revised" project is essentially the same water grab for corporate agribusiness, developers and Southern California water agencies as the old one.

The tunnels will hasten the extinction of Central Valley steelhead, Sacramento River Chinook salmon, Delta and longfin smelt, green sturgeon and other fish species, as well as imperil the salmon and steelhead populations of the Trinity and Klamath rivers, yet they will not provide any new water, according to Delta advocates.

"Virtually every promulgated statute and regulatory standard protecting the Delta has been routinely ignored and violated over the last three decades and, consequently, any assurances and promises by Delta tunnel proponents are worthless," said Bill Jennings, CSPA Executive Director. "California has been in a drought cycle more than forty percent of the time over the last hundred years and the tunnels will not provide a single additional drop of water. They will, however, further degrade Delta water quality and exacerbate conditions that have brought fisheries to the brink of extinction.”

The reason for the state and federal governments' continued cheerleading for the Delta tunnels plan, in spite of the project having no basis whatsoever in science, logic or economics, is due to the biggest issue we face in water and other environmental politics in California and the nation today - the capture of the regulatory apparatus by the regulated. Corporate agribusiness, developers, Southern California water agencies, and other corporate interests are working hand in hand with the agencies to build the tunnels.

This capture of the regulatory apparatus by the regulated was highlighted in April when Delta advocates slammed Brown for breaking his campaign promise that bond money wouldn't be used to mitigate the environmental damage caused by the tunnels — a $25 billion project designed to export Sacramento River water to agribusiness interests, Southern California water agencies, and oil companies conducting fracking and steam injection operations.

The admission by the Brown administration that it could use money from Proposition 1, the water bond, to pay for "habitat mitigation" linked to the construction and operation of the massive delta tunnels is no surprise, especially when you consider the Big Money interests that dumped $21,820,691 into the campaign. (http://www.eastbayexpress.com/SevenDays/archives/2015/04/29/why-governor-brown-broke-his-prop-1-promise-big-money-interests-dumped-218-million-into-the-prop-1-campaign)

The contributors are a who’s who of Big Money interests in California, including corporate agribusiness groups, billionaires, timber barons, Big Oil, the tobacco industry, and the California Chamber of Commerce. There is no doubt that these wealthy corporate interests are expecting a big return for their "investment" in California’s play-to-pay politic system, including the construction of the twin tunnels and new dams.

The Winnemem Wintu Tribe, other tribal representatives and their allies challenged the capture of the regulatory apparatus by corporate interests on June 29 and 30 when they rallied, chanted, sang and waved signs on the sidewalk in front of Westin Hotel outside the Second California Water Summit in Sacramento.

“This is a summit that is meant to help these people peddle Brown’s projects that will benefit his buddies: agribusiness and water sellers in Southern California,” said Caleen Sisk, Chief and Spiritual Leader of the Winnemem Wintu Tribe. “They are not interested in what’s best for the people of California and their children.”

Members of the Concow Maidu, Miwok, Hoopa Valley, Pomo, Wailaki and other tribes and Native Hawaiian groups joined with local activists as they shouted, “Water is sacred, water is life, protect the salmon, protect water rights.”

For more information, go to: http://www.indybay.org/newsitems/2015/07/04/18774455.php
Add Your Comments
Support Independent Media
We are 100% volunteer and depend on your participation to sustain our efforts!