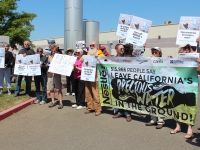 The outrage over the bottling of California water by Nestlé, Walmart and other big corporations during a record drought has become viral on social media and national and international media websites over the past couple of months. On May 20, people from across the state converged on two Nestlé bottling plants — one in Sacramento and the other in Los Angeles — demanding that the Swiss-based Nestlé corporation halt its bottling operations during the state’s record drought.

At the protests, activists delivered 515,000 signatures from people in California and around the nation who signed onto a series of petitions to Nestlé executives, Governor Brown, the California State Water Resources Control Board and the U.S. Forest Service urging an immediate shutdown of Nestlé’s bottling operations across the state.

Led by the California-based Courage Campaign, the protest was the third in Sacramento over the past year. The first two protests were "shut downs" this March and last October organized by the Crunch Nestlé Alliance.

Photo essay of protest against Nestlé in Sacramento