“Some of the same issues raised by Aqualliance regarding the twin tunnels, such as the impacts to ground water, land subsidence and climate, were brought up in this case and the court ruled favorably,” she said. 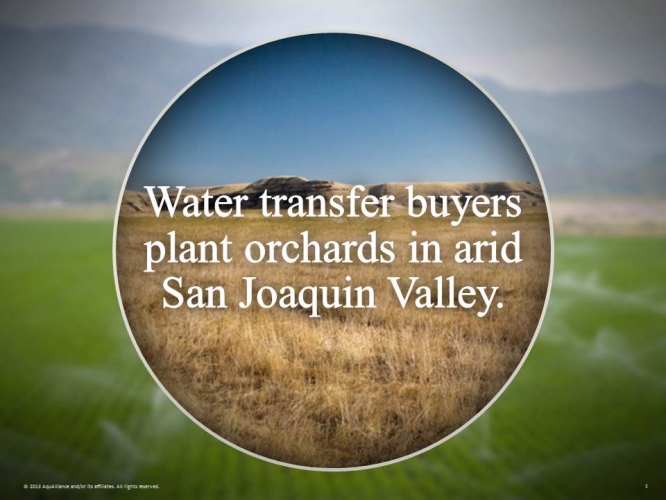 original image (960x720)
On February 15, Federal District Court Judge Lawrence J. O’Neill in Fresno issued an order supporting many of the claims made by AquAlliance and their co-plaintiff partners in a landmark lawsuit challenging water transfers from rice farmers in the Sacramento Valley to growers in the San Joaquin Valley.

AquAlliance filed the litigation in May 2015 against the U.S. Bureau of Reclamation (USBR) and San Luis Delta Mendota Water Authority (SLDMWA) over “their inadequate disclosure, avoidance of impacts, and mitigation of major water transfers” from the Sacramento Valleythrough the Delta to the San Joaquin Valley.

“AquAlliance is elated that the court found in favor of many of our legal arguments that seek to protect the communities, environment, and groundwater dependent farmers in the Sacramento Valley as well as Delta farmers and fish,” said AquAlliance Executive Director Barbara Vlamis. “This ruling exposes the danger posed by the 10-Year Water Transfer Program’s water-grab that would benefit agricultural interests with junior water rights growing permanent crops in a desert.”

USBR and SLDMWA (Agencies) approved a program that could send up to 600,000 acre-feet of SacramentoValley water south of the Delta each year. To look at that amount of water in perspective, 600,000 acre-feet each year for 10 years is equivalent to what a city of 100,000 people would use in 200 years, according to Vlamis.

”When combined with additional state approved transfers, the total could be over 800,000 acre-feet each year,” she said. “If history is any guide, half of the transfer water could come from groundwater substitution.”

Groundwater substitution transfers take place when a water district sells its river water that is normally used to irrigate rice and instead continues growing rice by pumping well water. “The grower makes money on both the water sale and the rice that is grown,” explained Vlamis.

“Although widely opposed by NorthState residents and local government, the Agencies moved forward approving the use of groundwater substitution, fallowing, reservoir releases, and conservation tomake the transfers possible,” according to Vlamis. “The Agencies proposed a thin veneer for mitigating impacts that depends only on monitoring the stressed hydrologic systems (groundwater, streams, and rivers) to produce data that will be reviewed in the future by USBR and the California Department of Water Resources (DWR).”

Vlamis said the significance of the decision extends well beyond the water transfers to current litigation in the courts challenging Governor Jerry Brown’s Delta Tunnels project.

“Some of the same issues raised by Aqualliance regarding the twin tunnels, such as the impacts to ground water, land subsidence and climate, were brought up in this case and the court ruled favorably,” she said.

The lawsuit asked the court to declare that the Agencies’ Environmental Impact Statement/Report was “arbitrary and capricious, ignored relevant new information and failed to meet minimum requirements of the National Environmental Policy Act (NEPA) and the California Environmental Quality Act (CEQA).”

Vlamis said the court order ruled in favor of AquAlliance in many areas. For example in their CEQA claims, the court ruled favorably over the absence of performance standards for groundwater mitigation measures; the FEIS/EIR failure to mitigate for land subsidence; and the inadequate cumulative biological impact analysis regarding reduced delta outflow.

O’Neill also ruled favorably over the FEIS/EIR’s failure to analyze impacts to the giant garter snake and propose mitigation under CEQA.

“This type of failure was deemed dangerous because the lack of analysis and findings about the extent of impacts makes it impossible to determine if the mitigation measures are sufficient,” said Judge O’Neil (Page 132 of ruling).

In addition, the decision determined that the U.S. Fish and Wildlife Service’s biological opinion for the giant garter snake (“GGS”) is invalid under the federal Endangered Species Act (ESA) because it relies on flawed conservation measures.

In the NEPA claims, O’Neill also ruled favorably on the failure to evaluate the effectiveness of groundwater mitigation and climate change.

It will be interesting to see the impact that this court decision will have on proposed water transfers this year.

The Brown administration on February 13 released the long-awaited cost-benefit analysis for the Delta Tunnels, claiming that the plan could "bring billions of dollars in benefits."

Delta Tunnels opponents countered that the analysis is "incomplete,” as it only examines the initial phased-in tunnel and states that analysis for the second tunnel would need to be completed in the future. More information: http://www.dailykos.com/...

2) Maps illustrating the groundwater conditions in the Sacramento Valley:

http://www.water.ca.gov/groundwater/data_and_monitoring/northern_region/GroundwaterLevel/gw_level_monitoring.cfm
Add Your Comments
Support Independent Media
We are 100% volunteer and depend on your participation to sustain our efforts!