Add an Event
Newswire
Calendar
Features
Home
Donate
From the Open-Publishing Calendar
From the Open-Publishing Newswire
Indybay Feature
Publish to Newswire
Add an Event
Related Categories: California | Central Valley | Environment & Forest Defense | Government & Elections
Delta Council Staff Finds CA WaterFix Inconsistent with Delta Plan, Chair Urges Withdrawal
by Dan Bacher
Saturday Nov 24th, 2018 1:48 PM
Since the Delta Stewardship Council must find that WaterFix is consistent with the Delta Plan before DWR can begin construction of WaterFix facilities, “It now appears that there is almost no chance that Delta tunnels will be approved and begin construction before Governor Brown leaves office in January 2019," according to Chris Shutes of the California Sportfishing Protection Alliance (CSPA). 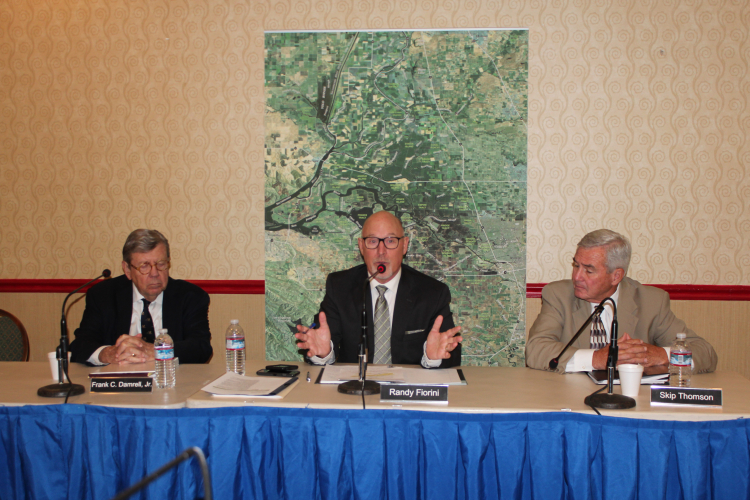 original image (5184x3456)
On November 8, the Delta Stewardship Council staff released a draft report finding that the California WaterFix is not consistent with the Delta Plan after considering the appeals filed by an array of organizations, Tribes and governments to the “certification of consistency” filed by the California Department of Water Resources.

The release of the staff report was followed by a council workshop on November 15 during which Council Chair Randy Fiorini and Council Member Frank Damrell suggested that DWR withdraw their controversial document.

This is a major victory against the Delta Tunnels project that Governor Jerry Brown is trying to put in place as much as possible before he leaves office in January and Governor-Elect Gavin Newsom takes the helm. The project would divert Sacramento River water from the North Delta through two giant tunnels to the South Delta to facilitate the export of Northern California water to corporate agribusiness on the west side of the San Joaquin Valley and Southern California water agencies.

“In light of claims raised by nine appellant groups, Council staff recommends that the Council conclude that substantial evidence does not exist in the record to support the Department's findings that California WaterFix is consistent with the Delta Plan. Staff further recommends that the Council remand the matter to the Department for reconsideration, pursuant to Water Code section 85225.25,” according to the report.

The Council staff found that there was no evidence that indicated the Delta Tunnels project would be operated in a manner that meets Delta water quality standards; that DWR did not use the best available science; that DWR did not provide evidence that water suppliers who would benefit from the tunnels would reduce their reliance on the Delta; and DWR failed to demonstrate that “the project is consistent with respect to compatibility with local land use plans.”

What does this all mean? “That means the tunnels will be stopped if the Council members go along with the staff recommendations,” said Michael Brodsky, lawyer for the Save the California Delta Alliance. “The California Department of Water Resources could revise and resubmit the tunnel project at a later date, but I think that would be unlikely if the vote is that it is not consistent with the Delta Plan.”

Brodsky said the council staff accepted 3 of Save the California Delta Alliance's main arguments: that the Waterfix is not consistent with D-1641 water quality requirements, particularly that it violates the Export to Inflow ratio; that WaterFix does not respect local land uses because of impacts on recreation and legacy communities; that WaterFix does not comply with the Delta Plan policy to reduce reliance on the Delta as a source of water supply.

”The staff report also finds that WaterFix did not use best available science with regard to sea level rise,” said Brodsky.

“The staff agreed with us that the tunnels project doesn’t rely on the best available science and that the beneficiaries of the project have not established reduced water reliance on the Delta and improved regional water self-sufficiency,” he noted. “They have also failed to establish substantial evidence on how they could comply with delta flow objectives, as specified in State Water Board Decision D1641. In addition, they failed to provided adequate evidence that they respect local land use when siting project facilities or restoring habitat.”

Barbara Barrigan-Parrilla, Executive Director of Restore the Delta, praised the DSC staff for having the courage to issue a report finding the tunnels project inconsistent with the Delta Plan.

“We thank and congratulate Delta Stewardship Council staff for doing the right thing and for having the backbone to assert that the CA WaterFix is inconsistent with the Delta Plan. Restore the Delta and its membership have shown up to countless public meetings, hearings, and workshops to communicate this message for three years now,” she said.

“As Governor-Elect Newsom prepares to take office, we hope he reflects on the DSC’s findings that indicate the tunnels project will not protect, enhance, or restore the Delta,” Barrigan-Parrilla stated. “Newsom won over voters by leaving the impression that he would modernize California. Governor-Elect Newsom has the chance to create his own unique legacy by backing away from this outdated 20thcentury project to pursue 21stcentury alternative projects that actually benefit the public trust.”

“The state of California is ready for innovative water management strategies and local self-sufficiency projects that create a more sustainable, reliable water supply. Newsom could be the leader to make this happen,” she said.

“The staff of the Delta Stewardship Council has found the deeply flawed twin tunnels proposal does not respect local communities, reduce reliance on the Delta, or support healthy Delta flows, per requirements of the Delta Plan,” said Frazier in a statement. “These findings validate and confirm what I have been saying from the very beginning about this ill-conceived project.”

There was no Council action taken at a November public workshop held in Sacramento by the DSC, but the Council is expected to take action on the determination at their December 20-21, 2018 meeting.

The big news was at the end of the November 15 workshop when Randy Fiorini, the Chair of the Delta Stewardship Council, recommended that the Department of Water Resources further define its Delta Tunnels project and suggested that DWR withdraw its certification of consistency before asking the Council to approve the project.

“Frankly, I’m frustrated,” Chair Fiorini said. “This project came to us before it was ready. At this point, with the weaknesses identified, and obviously in my opinion, there’s more work to do. I would strongly encourage the Department to consider withdrawing the certification of consistency. If you do so choose to do that, let us know as soon as possible so we can resume early consultation.”

“We’ve heard a lot about timing, prematurity throughout this hearing and this particular workshop … it seems clear to me that the record is not complete, particular on key issues, and those shortcomings are precisely the areas where early consultation benefits everyone in this room,” said Damrell. “This is an adjudicative process; this is not a forum to work out shortcomings. That’s not the purpose. It’s adjudicative by nature. The Department should certainly consider withdrawing its certification and immediately resume early consultation.”

Part of the reason the Council Members are recommending that DWR withdraw their certification of consistency is that DWR claims “no sensitive receptors” to hazardous materials in North Delta, when research from Deirdre Des Jardins and North Delta Cares shows otherwise: https://cah2oresearch.com/2018/10/29/waterfix-dwr-claims-no-sensitive-receptors-to-hazardous-materials-in-north-delta-towns/

Chris Shutes of the California Sportfishing Protection Alliance emphasized the significance of the Council Members' comments at the November workshop on his blog on the CSPA website: http://calsport.org/news/delta-stewardship-council-recommends-pause-in-delta-tunnels-project/

Since the Delta Stewardship Council must find that WaterFix is consistent with the Delta Plan before DWR can begin construction of WaterFix facilities, “It now appears that there is almost no chance that Delta tunnels will be approved and begin construction before Governor Brown leaves office in January 2019," said Shutes.

CSPA is part of Appellant Group 3 of the nine appellant groups, whose appeal was filed by Bob Wright with Friends of the River.

Access the Staff Draft Determination Regarding Appeals of Certification of Consistency for California WaterFix at: http://deltacouncil.ca.gov/docs/staff-draft-determination-regarding-appeals-certification-consistency-california-department