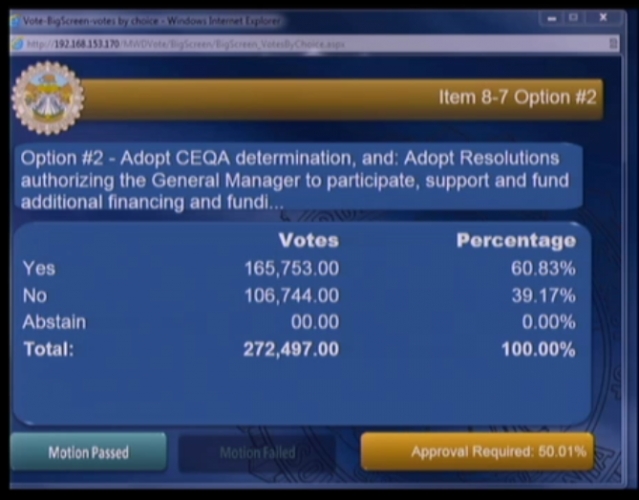 original image (669x523)
In spite of appeals by many of its ratepayers to oppose the Delta Tunnels project, the Metropolitan Water District of Southern California’s Board of Directors on April 10 voted 61% to 39% to support the full project to build two massive water tunnels under the Sacramento-San Joaquin River Delta.

The vote in favor of the twin tunnels took place after a topsy-turvy week where representatives of the giant water agency flip-flopped between support of a one tunnel proposal and a two tunnels option.

The Board pledged to commit $10.8 billion (or possibly more without a spending cap) to cover 64.6 percent (or more) of the upfront construction costs of the $17 billion project, making Metropolitan the project’s primary investor.

“For decades, we have sought a solution to the problems of the Bay Delta, problems that put Southern California’s water supply at risk,” Metropolitan board Chairman Randy Record said after the vote. “We finally have that solution, California WaterFix. We simply could not jeopardize the opportunity to move this long-sought and much-needed project forward.”

Predictably, Governor Jerry Brown, who yesterday sent a letter to Metropolitan Water District board members yesterday urging them to support the project in full, praised the decision.

“This is a historic decision that is good for California – our people, our farms and our natural environment,” claimed Brown.

Likewise, Department of Water Resources Director Karla Nelmeth lauded the board’s approval of the Delta Tunnels proposal in a statement.

“Today’s decision by MWD’s Board is a clear demonstration that they see the public benefit and value in pursuing WaterFix,” Nemeth said. “This smart investment will protect billions of dollars in ratepayer investment, provide generations of Californians with clean drinking water and address the Delta’s worsening health.”

“The state is eager to move forward with WaterFix to protect the Delta ecosystem and ensure a reliable water supply for the future. I am pleased that the directors of MWD, who have a long history of forward-thinking leadership in water management, are making progress to build on their local sustainability efforts by shoring up the reliability of this critical water supply,” said Nemeth.

Representatives of fishing, conservation, consumer and environmental groups blasted the vote, emphasizing that it is already being challenged in court because of the enormous devastation it would pose to salmon and other West Coast Coast fisheries and the Delta ecosystem.

"Today the Met's directors voted to saddle their ratepayers with up to $50 per month charge in order to subsidize water to almond growers in the western San Joaquin Valley,” said John McManus, Executive Director of the Golden Gate Salmon Association (GGSA). “GGSA and allies are already in court challenging this project because federal fish experts have found the twin tunnels will be a disaster for salmon."

"We may have lost the battle today, but Prop 218 and Prop 26 violations will lead to more litigation where we will win the war,” said Barbara Barrigan-Parilla, Executive Director of Restore the Delta after the vote. “Today's decision to issue a blank check to MWD General Manager Jeffrey Kightlinger for project construction marks day one of the next fifteen years of water wars in the courts where we are determined to prevail. Litigation is a form of collaboration, and we look forward to continuing this work with our partners to protect and preserve the San Francisco Bay-Delta estuary, its wildlife, and its people. “

She also noted, “Despite MWD’s approval to fund 64.6 percent or more of the twin tunnels total costs, it is still unclear as to who will be financing the remainder of the project after Central Valley Project contractors said they would not fund the project, and Santa Clara Valley Water District voted to only participate in a one tunnel project.”

“Without major State Water Project and Central Valley Project contractors on board, MWD will have to recruit private investors to create a private-public partnership—a clear attempt to undo protections of California water as a public trust resource. Without private investors, MWD's ability to spend more than $10.8 billion on project costs could further burden Southern Californians with even higher tax increases than currently presented,” she said.

Before the vote, a multitude of speakers, including ratepayers, environmental justice advocates, conservationists, ministers, community leaders and union representatives, urged the board to reject both the single tunnel and twin tunnels options before the board.

Local water ratepayer Sara Huezo perhaps said it best: “You want this project? Set up a #gofundmeand pay for it yourselves! Don't raise LA ratepayer taxes for the Delta Tunnels."

Many board members also opposed the vote, including representatives of Los Angeles, the San Diego Water Authority and the Cities of Santa Monica and San Fernando.

Los Angeles board member Mark Gold told the Board he opposed moving forward on a project "that the two largest cities in the state don't support," referring to L.A. and San Diego.

Brenna Norton, the Senior Organizer for Food & Water Watch, said her group is “outraged by Metropolitan Water District’s vote to deliver almost $11 billion and a blank check toward the wasteful Delta Tunnels project.”

“It is appalling to raise Los Angeles families’ bills for a scheme that will needlessly make Southern California’s water more expensive, while benefiting corporate agribusiness,” she explained. “We thank Mayor Garcetti’s appointees on the Metropolitan board for unanimously voting against it, along with representatives from the San Diego County Water Authority and the Cities of Santa Monica and San Fernando.”

“The tunnels project is still missing at least $7 billion of the remaining costs, not including interest payments, and remains unsecured. This fight is not over,” Norton emphasized.

The fight to stop the tunnels is definitely not over, since the project faces other hurdles before construction of the project could ever start, including decades of litigation against the project. The State Water Resources Control Board is currently conducting evidentiary hearings on the petition by the California Department of Water Resources and U.S. Bureau of Reclamation to change the point of diversions for the Delta Tunnels project, in spite of a change in the project by the state and federal governments from the twin tunnels to a two phase project.

The Delta Tunnels project would hasten the extinction of Central Valley steelhead, Sacramento River winter and spring Chinook salmon, Delta and longfin smelt, green sturgeon and other fish species, as well as imperil the salmon and steelhead populations on the Trinity and Klamath rivers, according to fishing groups, Tribes and conservation groups.
Add Your Comments
Support Independent Media
We are 100% volunteer and depend on your participation to sustain our efforts!