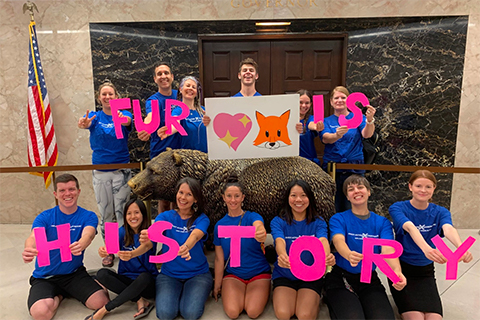 Fur industry corruption, animal cruelty investigations, animal liberation actions, and anti-fur protests have culminated in legislative victories to ban fur. Berkeley-based grassroots network Direct Action Everywhere (DxE) spearheaded the passage of city-wide fur bans in Berkeley in 2017 and San Francisco in 2018. This October, California passed the nation’s first statewide ban on the sale of animal fur, following years of work by organizations including In Defense of Animals, PETA, The Humane Society of the United States, Social Compassion In Legislation, Compassionate Bay, DxE, and others. The California ban goes into effect January 1, 2023.

Prior to passage of California AB 44 banning fur, dozens of people who showed up in Sacramento in July to speak in opposition to the bill were later revealed to have been paid to do so by the Fur Information Council of America and Mobilize the Message, a Republican consulting firm.

On November 29, in the long-time tradition of Fur Free Friday protests the day after Thanksgiving, DxE activists demonstrated at a Walnut Creek fur store on Black Friday, less than a week after the store’s opening. One protester, Cassie King, masqueraded as a manager, welcoming customers into the store with satirical enthusiasm, describing the violent, cruel ways animals in the fur industry are treated and killed. The fur store, Maximillian, sells fur relocated from Saks Fifth Avenue in San Francisco, where a complete legal ban on fur sales becomes effective January 1, 2020.