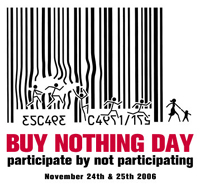 Buy Nothing Day on Friday, November 24th
Day of Action in the Streets As People Protest Consumerism

The day after Thanksgiving is often called "Black Friday," because as people start their holiday shopping, many stores' balances move "into the black." Anti-capitalist activists call the day after Thanksgiving Buy Nothing Day. The Bay Area has a healthy tradition of holding rowdy protests on that day. As Indian People Organzing for Change says, "Buy Nothing Day isn't just about changing your habits for one day. It's about starting a lasting lifestyle commitment to consuming less and producing less waste. Consumerism is desecrating the earth and its resources. Thousands... everywhere will take a 24-hour consumer detox as part of the 14th annual Buy Nothing Day."

On Friday, November 24th, there were many events in the Bay Area:

CodePINK was at the SF Westfield Mall, on Market St. between 4th and 5th Streets, starting at 6:30am for a No Buying While Soldiers are Dying Action. They planned to "spread ‘no business as usual’ while we make the connections between consumer spending, suffering of soldiers and civilians, and our occupation of Iraq."

The annual Fur-Free Friday Anti-Fur Exhibit and Protest was held in Union Square at the Stockton St. end, and at Bloomingdales on Market & 5th (between 4th and 5th) from 11:00-3:30pm. There was also a FFF protest in San Jose, from 10am to noon.

At 12pm, there was a labor picket line in support of Operating Engineers No. 39 at Macy's Union Square and the 51 other Macy's stores in Northern California and Reno. Macy's last contract offer to the workers who maintain the lights, heat and other physical fixtures, was less than half the current cost of living per the US Dept of Labor.

From 12:00pm to 4:00pm at the Emeryville Shellmound (Bay Street Mall), Indian People Organizing for Change (IPOC) and supporters held a protest and die-in. The shell mound was once 60 feet high and up to 600+ feet in diameter. It is older than the pyramids in Egypt and held at least four historical levels of burial sites.

On Saturday, the monthly Really, Really Free Market will take over Dolores Park from 12pm to 4pm.