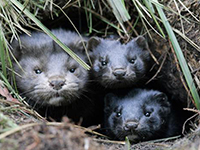 The year 2013 was a busy one for animal liberation actions across the U.S., primarily at businesses that breed and/or sell fur. That September, Los Angeles animal activists Tyler Lang and Kevin Johnson were arrested in rural Illinois, charged with felony "possession of burglary tools." Tyler served four months and was released. Kevin was sentenced to thirty months in jail and remains behind bars. In July 2014, both were charged with violating the Animal Enterprise Terrorism Act (AETA), a 2006 law that reclassified a wide range of petty criminal activity as “terrorism” if done in the name of harming the profits of animal enterprises. In June and July of 2015, Kevin and then Tyler pled guilty and currently await sentencing. SupportKevinandTyler.com

On July 24, 2015, the FBI arrested two more animal rights activists for allegedly freeing mink and other animals from fur farms, and vandalizing the property of animal-abusing businesses. Joseph Buddenburg and Nicole Kissane of Oakland were charged under AETA. The government alleges that since the summer of 2013 the two caused hundreds of thousands of dollars in damage to corporations that they viewed as being cruel to animals. They are alleged to have freed 6,000 animals, including mink and bobcat, from fur farms in Idaho, Iowa, Minnesota, Wisconsin and Pennsylvania. They’re also alleged to have traveled the west coast of the U.S. and used super glue and glass etching fluid to vandalize the property of fur retailers in San Francisco, San Diego, and Minneapolis.

In 2009, Joseph Buddenburg was one of the first four people ever arrested under AETA, largely related to to free speech activism targeting animal research at the University of California. A year later, charges against the "AETA4" were dismissed.

A call-out for support for Joseph and Nicole went out for their court appearance on July 28 at the Oakland Federal Courthouse. At the hearing, Judge Ryu released Nicole from electronic monitoring and allowed her to travel but ordered that Joseph remain on home lockdown with continued monitoring. Their next scheduled court date is September 9 in San Diego.