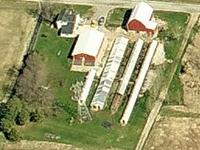 On October 5, the eighth U.S. fur farm raid since July saw 2,000 mink freed from a farm in New Holstein, Wisconsin. Wisconsin is the largest fur farming state in the U.S., killing over 1 million mink annually. This raid is the first release of animals in the state in nearly 15 years. Cages were opened and 2,000 of the farm's reported 5,000 mink were released. Across the U.S., over 10,000 animals have been released since July — a level of activity not seen since the late 1990s. The latest raid also marks the 100th (known) release of animals from a fur farm since the Animal Liberation Front officially began it's fur farm campaign in 1995. A single release of foxes was reported in Oregon in 1986, before this tactic was widespread.

The ALF appears to be targeting newly discovered farms, with six of the eight farms visited this summer having been made public in the last two years. The address for Bolander Furs was first made public in 2012, after a list of 60 previously unknown fur farms surfaced. Sites like Coalition Against Fur Farms and Final Nail track changes in the fur industry, including posting addresses of farms as they become known.