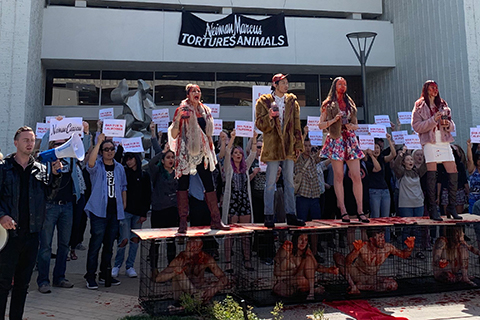 Approximately 100 activists with global animal rights groups Direct Action Everywhere (DxE) and In Defense of Animals staged a visual demonstration against fur at the Stanford Shopping Center in Palo Alto on April 28. The “Bloody Fashion Show” included a commentator, models, cages, fake blood, and even a red carpet. After the fashion show, activists entered Nieman Marcus and spoke out about the cruelty behind the fur products being sold there.

The action comes on the heels of fur bans in West Hollywood, San Francisco and Los Angeles, as well as a bill to ban fur sales statewide being considered in the California assembly. A.B. 44 would make it illegal to manufacture, sell, offer for sale, display for sale, trade, give, donate or otherwise distribute a fur product in the state. With a wave of fashion designers and retailers also ditching fur, activists say its time we move past the cruel, unnecessary industry.