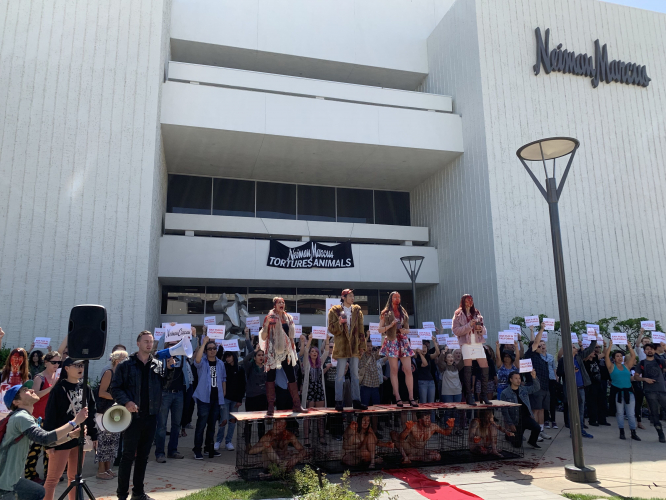 original image (4032x3024)
Approximately 100 activists with global animal rights groups Direct Action Everywhere (DxE) and In Defense of Animals staged a dramatic visual demonstration against fur at the Stanford Shopping Center in Palo Alto on April 28. The “Bloody Fashion Show” included a commentator, models, cages, fake blood, and even a red carpet. After the fashion show, activists entered Nieman Marcus and spoke out about the cruelty behind the fur products being sold there.

The action comes on the heels of fur bans in West Hollywood, San Francisco and Los Angeles, as well a bill to ban fur sales statewide being considered in the California assembly. A.B. 44 would make it illegal to manufacture, sell, offer for sale, display for sale, trade, give, donate or otherwise distribute a fur product in the state. With a wave of fashion designers and retailers also ditching fur, activists say its time we move past the cruel, unnecessary industry.

“Animals in fur farms are subjected to what can only be described as torture,” said Lewis Bernier, a fur farm investigator with DxE who took part in today’s demonstration. “There is no need for such a barbaric industry in 2019.”

Animals in the fur industry are routinely kept in small cages their entire lives before being killed upon reaching adult size. The killing methods used to preserve fur quality are often insufficient, resulting in animals being skinned alive.

"California's consumers now have the opportunity to save countless animals from horrific deaths for the sake of trivial fashion statements. We are thrilled to combine forces with DxE to make fur history in California," said Marilyn Kroplick, M.D., the President of In Defense of Animals.
https://www.directactioneverywhere.com
§
by DxE Saturday May 4th, 2019 3:04 PM 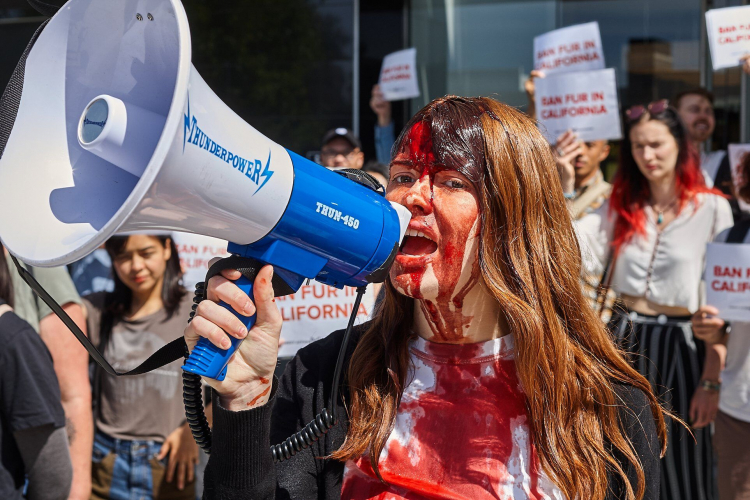 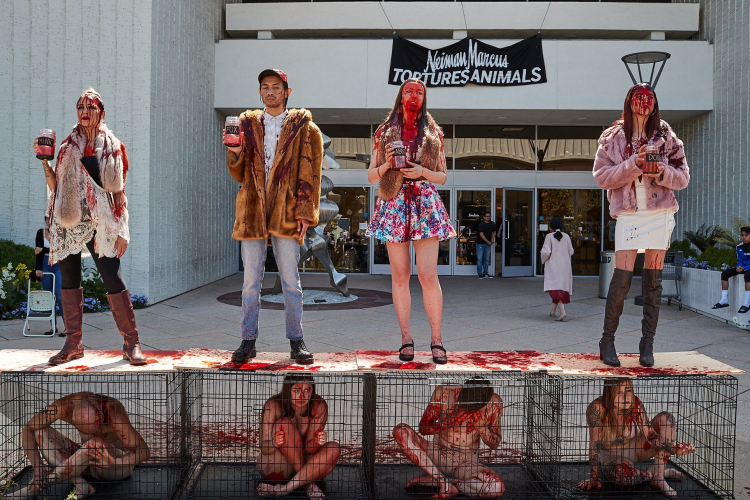 original image (1925x1283)
https://www.directactioneverywhere.com
Add Your Comments
LATEST COMMENTS ABOUT THIS ARTICLE
Listed below are the latest comments about this post.
These comments are submitted anonymously by website visitors.