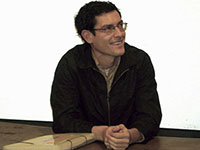 On January 9th, Peter Young spoke at the Long Haul in Berkeley prior to a screening of "Behind the Mask: The Story Of The People Who Risk Everything To Save Animals." Peter says that the film was not intended to entertain, but rather to confront viewers with their own inaction and pull the mask away from the people in the movie so that viewers see themselves. He emphasized that there are no experts in direct action or animal rights actions and that "every single one of us is an animal liberator."

In 1997, Peter Young freed 8,000 - 10,000 mink and foxes from various fur farms in a two-week road trip across three midwestern states. In 1998, indictments were handed down for the arrest of Peter Young and accomplice Justin Samuel. After nearly 7 years on the run, federal authorities captured Peter Young in San Jose in 2005 and he served almost two years in prison until his release in early 2007.