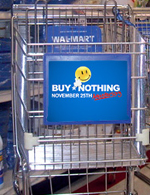 The Buy Nothing Day movement continued this year, with groups all over the country organizing people to not go shopping on the day after Thanksgiving. To counter the rabid consumer culture that has engulfed society, activists use this day every year to encourage people to curb their consumption for at least one day.

Some people organized creative protests at Wal-Mart stores: Adbusters Whirl-Mart page Outside of the Bay Area, Buy Nothing Day was observed in cities such as San Diego and New York.
In the East Bay, the Shellmound Peace Walk ended at 7:00am at the Bay Street Mall in Emeryville. In the North Bay, the People's Revolutionary Organization hosted a full day of direct action, starting at 9am and lasting until approximately 4pm. Events were held at various shopping centers in Petaluma, Rohnert Park, and Santa Rosa. The began at 9am at Kohl's in Petaluma, and continued at 10am at the Target in Rohnert Park, then at 11am at the Wal Mart in Rohnert Park, at 1pm at the Coddingtown Mall in Santa Rosa, at 2pm at the Santa Rosa Mall, 3pm at Best Buy in Santa Rosa, and 4pm at Target in Santa Rosa. Read more In San Jose, Buy Nothing Day Bike Party gathered at 5:30pm.

People are accustomed to going to San Francisco's Union Square shopping district for Buy Nothing Day protests, and this year was no exception. A Fur-Free Friday march and leafletting event started at 11:30am in the center of Union Square in San Francisco.

Photos Berkeley Women in Black switched sides of the Bay, appearing in Union Square at 12pm.

Photos Riot Folk was part of a free show that included folk music, a poetry slam, dance performances, and more. People were encouraged to bring art, paint pictures, sing, dance, play, act, and to otherwise participate in the event. People gathered at 12pm at Powell and Market.
There will be a Buy Nothing Day event at Artists' Television Access at 8:00pm, with video screenings, art installations, and music.