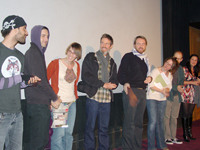 In Bold Native, Charlie Cranehill (Joaquin Pastor), an ALF member wanted by the government for domestic terrorism, emerges from the underground to coordinate a nationwide action, while his CEO father (Randolph Mantooth) tries to ﬁnd him before the FBI does. Simultaneously, a young idealist campaigns for more humane treatment of farmed animals on behalf of a large non-proﬁt organization, and a woman from Charlie’s past threatens to undermine his plans.

John Robbins, author of Diet for a New America and Food Revolution, says the film Bold Native "is the controversial story of young adults who just can’t sit by and stay silent in the face of massive cruelty to animals. Unwilling to passively succumb to resignation and despair, they take a stand, not just with their words, but with their actions. Some might see them as threats to society, others might admire them as self-sacrificing heroes, but no one could see this remarkable film and not gain a greater understanding of what courage really means.”

The ﬁlm reﬂects a growing cultural debate about the use of animals for food, clothing, entertainment, and scientific research. It introduces viewers to the Animal Enterprise Terrorism Act (AETA) of 2006, a law which enables the prosecution of activists as terrorists if their actions result in economic damage to corporations in animal industries like factory farms, slaughterhouses, research labs or fur farms. In addition to narrative storytelling, the ﬁlm incorporates undercover footage from labs, farms, and real-life animal liberations for realism.