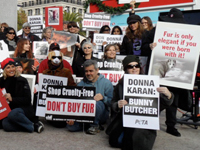 The annual Friday-after-Thanksgiving protest of the fur industry, led by In Defense of Animals (IDA) and People for the Ethical Treatment of Animals (PETA), was held in San Francisco's Union Square on November 26th. Similar demonstrations were held in Portland and other cities across the U.S. and the world. Event organizers called for demonstrators to, "Come and raise your voice for the voiceless 50 million fur bearing animals that are brutally slaughtered each year for their fur."

Fur-Free Friday is an annual event that takes place the Friday after Thanksgiving, and aims to educate people about the suffering of fur-bearing animals. Organized originally in 1986 by grassroots activists to abolish the fur trade, Fur-Free Friday has grown to be one of the most widely attended annual demonstrations of the animal rights movement.