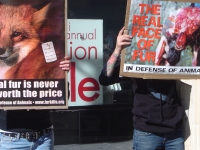 On-going Protest of Fur Shop Kicks Off on Fur-Free Friday
J. Malnick's in Oakland Targeted as the Only Major Fur Retailer in the East Bay

On Friday, November 24th, ("Fur-Free Friday") approximately 10 individuals protested the selling of fur at J. Malnick's at 1901 Broadway in Oakland. Protesters educated passers-by about the horrors of the fur industry, including how animals are commonly killed using cruel methods including poisoning, gassing and anal electrocution and how cat and dog fur is often mislabeled as coming from another animal. During the peaceful protest, potential customers actually decided not to enter the shop that sells both fur and non-fur items on what is the busiest shopping day of the year. The owner, Mr. Warren Malnick, obviously not pleased that customers might find out about this dirty business, tried to dissuade the protesters, first by calling the police. When the police arrived and told him that the protesters were not breaking the law and were welcome to voice their opinions, Malnick then got visibly angry and hurled insults at the protesters.

Further demonstrations have been regularly scheduled.