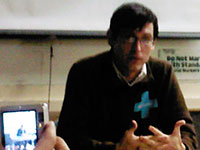 On February 23rd, noted animal rights activist Peter Young spoke at the Louden Nelson Center in Santa Cruz about his experiences with the animal liberation movement. His talk was followed by a screening of the film "Behind the Mask", a thought provoking film that gives an in-depth look at the lives and motivations of animal liberationists. The event was a benefit for the SHAC 7; six individuals whose 1st Amendment rights were violated when they were sent to prison for defending animals by merely drawing attention to the horrors that go on at an animal testing facility called Huntingdon Life Sciences.

In 1997, Peter and a friend liberated over 8,000 mink and foxes from various fur farms in a two-week road trip across three midwestern states.

Read More and Listen to Audio

see also: Audio Interview with Will Potter of "Green is the New Red" || Analysis of Animal Enterprise Terrorism Act || Green Is The New Red.com