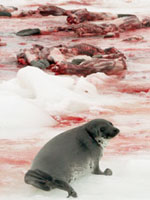 Despite being the target of protests since the 1960s, recent worldwide protests prior to the hunt, and the presence at the hunt itself of numerous protestors from organizations such as the Humane Society of the United States (HSUS) and Sea Shepherd, this year's Canadian seal hunt, which started March 29th, continues unabated with 20-30,000 pups being killed per day. Many countries, including the United States, ban imports of seal products. The hunt, though, still earned about $16.5 million last year, mostly from pelt sales to Norway, Denmark and China. Clubs, rifles and spears are used to kill the animals en masse for their fur. Regulations require that hunters ensure their prey is dead before moving on but animal activists say they have witnessed otherwise and that the pups are are often skinned alive. Up to 300,000 seal pups may be legally slaughtered per year, as the Canadian government has recently increased the totals allowed. Confrontations between hunters and observers have become heated at times. Hunters have physically attacked some observers. Gunfire has also been used seemingly to scare off those who are lawfully observing the hunts. There are laws which govern how close to a hunt observers may come (10 meters) and several animal activists have been beaten and arrested by authorities for breaching this distance although the activists deny they were in violation of the perimeter of an active hunt. This year, HSUS has called for a boycott of Canadian seafood by American distributors, restaurants, and consumers to exert economic pressure on the Canadian government to stop future seal hunts.