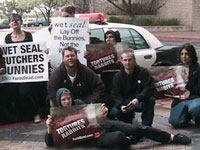 Activists with PETA (People for the Ethical Treatment of Animals) and the DAAA Collective (Direct Action Anti-Authoritarians) protested Saturday against the use of rabbit fur at "hip" clothing store Wet Seal, and the fur trade in general at a heart of Modesto consumerism, the Vintage Faire Mall. Two police cars and the mall security force greeted the protestors, as 12-15 activists held signs and passed out information on Wet Seal. Several DAAA Collective members were asked if they were with PETA, or if they were the organizers. They were also told that they could not film outside. Mall security was in fact up to date with the Pruneyard rulings, which protect free speech in public areas that happen to be on private property, and in the end "agreed" to let the activists videotape outside. Leaflets on Wet Seal and their practices were handed out, and many passers-by said they were sickened at the murder of rabbits for the sake of their fur. Shoppers were educated on alternatives to fur, and some people even grabbed a sign to join in. Report · Photos