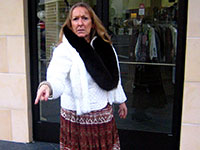 On February 2nd, a number of animal rights/liberation activists demonstrated for about three hours outside of J.Malnick Clothing at 1901 Broadway St. in Downtown Oakland. J.Malnick is Oakland's only major fur retailer, which sells both full length fur coats and fur-trimmed items as part of their inventory.

Activists turned many customers away (who vowed to never shop there again) much to the dismay of the store's employees. The activists were repeatedly harrassed and threatened by Mr. Malnick who taunted the activists. One employee (pictured) threatened to "slap the shit out of" the activists. Read More