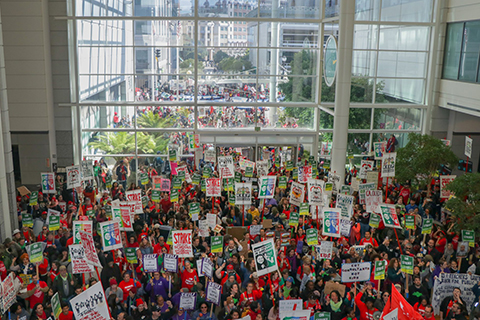 Oakland teachers are the lowest paid teachers in Alameda County. Every year, 1-in-5 teachers leave the district. On top of high teacher turnover, students are already under-resourced with only one academic counselor per 600 students, and only 21 nurses for all 37,000 students. Oakland teachers held a one-day wildcat strike on January 18 as a warning, yet the Oakland Unified School District still refuses to approve an adequate contract with the Oakland Education Association or resolve the ongoing student resourcing issues.

Teachers are demanding smaller class sizes, more student support, a moratorium on charters, no more school closures, and a living wage. To fight for those goals, teachers went on strike city-wide on Thursday, February 21. There are morning and afternoon picket lines at all 86 school sites, 19 of which are considered priority locations and five high priority. Teachers and allies request folks to join them on the line and show solidarity at mid-day rallies. You can show your support by donating food and supplies to the teachers, parents, students and community allies on the picket lines or turnout for picket line help from 7-10am and 2-4pm at targeted locations.

Day 3: Monday, Feb 25 — 12:30pm, rally at Oakland City Hall and march to State Building to support the bargaining team. Later, the OUSD school board meeting was shut down.

Oakland Teachers on Strike: Stakeholder Voices on the Struggle |

Day One of Oakland Teachers' Strike: Rally at City Hall |

"When We Fight We Win!" Thousands Of Oakland OEA Teachers With SEIU 1021 Workers Strike |

Related Feature: Teachers Striking in LA and Promising to Strike in Oakland If Funding Needs Not Met