Add an Event
Newswire
Calendar
Features
Home
Donate
From the Open-Publishing Calendar
From the Open-Publishing Newswire
Indybay Feature
Publish to Newswire
Add an Event
Related Categories: East Bay | Education & Student Activism
OUSD board member Jumoke Hinton chokes Oakland teacher while Ronald Muhammad shoves others
by respect the picket line
Monday Mar 4th, 2019 9:25 PM
On March 1st, Oakland teachers picketed the OUSD school board meeting at La Escuelita Elementary. OUSD Board Member Jumoke Hinton showed up with Ronald Muhammad as her muscle and the two of them attempted to barge through the picket line. In the process, Hinton choked Darnisha Wright, a kindergarten teacher at Markham Elementary School, and Muhammad shoved several others around. Both later issued statements denying their actions to various degrees, although Hinton expressed remorse. Watch the videos for yourself and it's apparent both are lying. 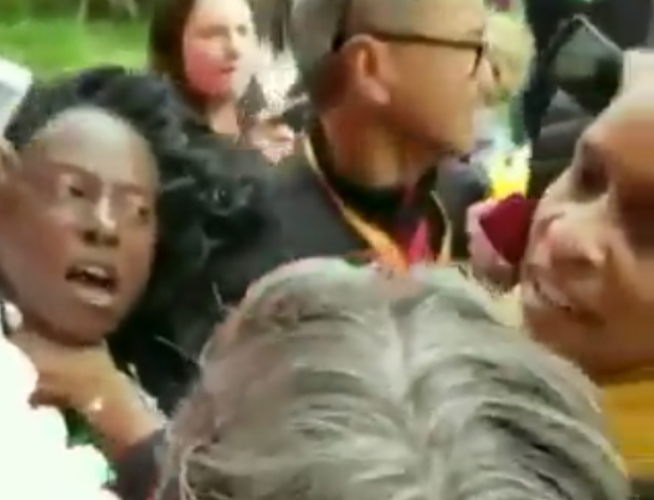 To: The Oakland Community
From: Jumoke Hinton Hodge, Director

I care deeply about Oakland children, their families and the teachers that nurture them in our schools. And I value our communities long struggle for more just and fair public school systems. Please accept this statement regarding Friday events.

Yesterday, as the members of the Oakland School Board were preparing for our meeting, a large number of demonstrators engaged in a series of activities that physically threatened us as board members and me in particular. They chained the doors of the board room, trapping some inside and keeping some out. I was directed by school district police to go through a specified door. When I did, the protest became chaotic and dangerous, with some protesters pushing forward, some blocking doors, and some putting hands on me. I was pushed to the ground, briefly disoriented, and tried to get back up. In doing so, I realized I was inadvertently pushing up against a teacher’s neck.

I would never have intentionally touched another person (or a sister) in that way. And I regret any harm that I might have caused her. I am deeply troubled by this and when realizing afterwards who it was, I offer my sincerest apology to Ms. Wright. I acted out of fear and self-defense, and would never seek to hurt anyone, least of all a teacher. In view of the entire incident, I remain deeply concerned about the threat to me and my colleagues as public servants. I am a deep believer and practitioner of nonviolent protest. What happened yesterday was not that. It was terrifying, unacceptable, and has no place in our civil discourse, especially on a day when we should be celebrating an agreement that will end a strike and offer our teachers something closer to what they deserve.

I deeply apologize to Ms. Wright and know her to be a dedicated teacher. I hope she and I can find a way to restore any harm that has been done.

To whom it may concern: Mike Hutchinson, Davey D Cook I've known You Davey for 30yrs and Mike Hutchinson You're still fairly new to the Town but for the duration of time that I've known both of You, the interaction has been cool. I've personally gotten between people who have looked to harm both of You, so what on God's green Earth would make You think that I'd stand by and watch anyone cause harm to Our Sister? Mike regardless of a difference of opinion politically there is NO political office that one could seek that should ever have You stand by and watch Your Sister get assaulted like SHE Was. Though I stand with better pay for teachers and by the Grace My record shows that Me and My Family support Our pipeline, I am not Demasculated nor Desensitized to ever watch My Sister get treated like She did. Please believe I restrained Myself. #1 My district School board Representative DID NOT HIRE Me, I am NOT Jumoke Hinton bodyguard. I am her constituent (We have ACTUAL children in Our pipeline) AND her Brother. #2 There was a crowd at the School board so I would not leave money in My car. #3 We were not (shouldn't matter) crossing a picket line-Neither one of Us was looking to take anyone's job. We simply were attempting to get into the building for Jumoke to announce the tentative Agreement that the majority of folk didn't know about yet. Why not come and talk with ME like WE have always done? This mob mentality where You victimize the Victim doesn't work. WE were not the aggressors but WE were aggressed upon and being pushed shoved, hit, while "protesters" were going in My Pockets, stealing my phone, tearing my clothes, attempting to snatch My hard earned money was Way over the line. I am a Born and raised in Oakland and it is what it is- BUT what they did to our Sister after separating Us, grabbing her, jumping on Her back, throwing Her to the ground, and what not, to hell with Your stance that is Your Sister. If it were one of Your wives or female family member, YOU both know I would do the same for them. But to admit that You were there! "Wow" YOU both should have talked to Me like We have done before and gotten a better overstanding before perpetuating a bold face LIE. Mike if YOU were there, then CLEAR YOUR STANCE UP-I'm just Say'n# That Sister was defending herself as some are attempting to downplay that and make political statements at her expense. Town Biz# I stand with the Truth the WHOLE Truth proudly. The nerve of the "new Oaklanders" to keep Shouting at me "why are You here?" Answer.. I am Born Raised live and have Children in the Town. # DeeplyRooted

https://www.facebook.com/ronald.muhammad.9/posts/10156460563546443
Add Your Comments
Support Independent Media
We are 100% volunteer and depend on your participation to sustain our efforts!