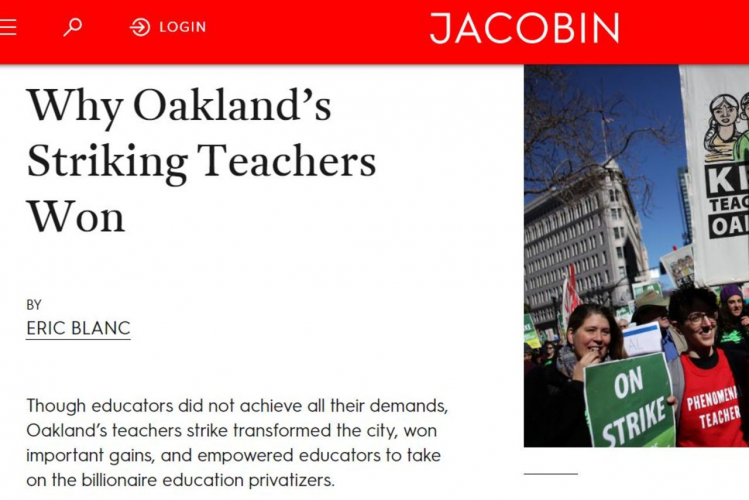 By Norisa Diaz for the World Socialist Web Site

On Monday, March 4, the day after the Oakland Education Association imposed a sellout contract on 3,300 teachers, the Jacobin publication, which is affiliated with the Democratic Socialists of America (DSA), published its analysis of the outcome of the strike, “Why Oakland’s Striking Teachers Won,” by Eric Blanc.

The title alone would be the cause of justified outrage from Oakland teachers and their 36,000 students, many of whom joined educators on the picket lines for seven days only to have $22 million in budget cuts imposed on them through a rotten quid pro quo between the union and the district.

Nearly every line of the article is misleading or an outright lie. Jacobin magazine not only seeks to rewrite the events of the Oakland strike and the betrayal by the Oakland Education Association (OEA), but also to falsify the lessons of the global revolt by teachers and students against unending austerity and privatization.

Under the subheading, “Assessing the Outcome,” Jacobin does its best to convince teachers that they have won a great victory. Blanc writes, “Though the final agreement fell short of many members’ expectations, it was nevertheless a significant victory given the unfavorable context facing the Oakland educators.”

In other words, the “significant victory,” amounts to a pay freeze or even a cut, given that the cost of living in the San Francisco Bay Area is between 3-4 percent per year. Moreover, the largest annual raise of 3.5 percent will not arrive until three years from now.

Most significantly, the paltry pay increase will be paid for through draconian cuts in educational services for students. This was made clear from the beginning by Kyla Johnson-Trammell, the superintendent of the Oakland Unified School District (OUSD) and completely accepted by the OEA. In a press conference announcing the sellout deal on March 1, OEA President Keith Brown acknowledged the agreement hinged on the passage of such cuts.

Blanc claims the strike “also won modest gains in class sizes and support staff ratios for students,” without saying anything about what these “modest gains” were. In fact, the majority of classes will be reduced by only a single student, and for most schools the reduction will not take place for three years.

Completely unmentioned by Blanc is what has caused some of the most outrage from teachers—the fact that there was absolutely no change in the nurse to student ratios, which will remain at one nurse for every 1,750 students. The nurses, and therefore the students, were left hung out to dry.

The most critical issues that drove teachers to fight in Oakland, like their counter-parts around the US and internationally: privatization and charterization, school closures and the looting of public education and school funding cuts—were completely dropped by the OEA. Indeed, the shutdown of the strike paves the way for the union to collude in the escalation of the attack on public schools.

Partially acknowledging this fact, Jacobin claims that the “because the announcement of the [school] closures proposal came on the eve of the strike, neither the union nor the rank and file ever fully committed to prioritizing the issue.”

Another contemptible lie! In fact, the OEA explicitly rejected efforts by teachers to make the question of budget cuts and school closures a central component of the strike. Throughout, the union affirmed its acceptance of the basic framework of the budget cuts, going so far as attempting to stop teachers, parents and students from picketing a school board meeting on the cuts once when the tentative agreement was announced. This strike-breaking operation by the OEA is covered up by Blanc’s efforts to attribute to teachers the union’s disinterest in “prioritizing the issue” of school closures.

After doing his best to package the deal as a victory, Blanc proceeds to rationalize its “limitations” by reference to the supposed unfavorable “economic context, and political relationship of forces, facing Oakland educators and their union.”

Chief among those to be blamed for creating this “unfavorable context” are… the teachers themselves. According to Blanc, teacher participation on the picket lines “was beginning to drop,” and, by March 1, “more than a few teachers I spoke with on the picket lines underscored their financial inability to continue striking much longer.”

Blanc does not say what these “more than a few teachers” felt about the union’s refusal to pay strike benefits to them and what this may have contributed to their financial difficulties. The reality is that the union was deliberately trying to starve teachers into submission even though each Oakland education pays over $1,100 per year in union dues. This money was not made available to teachers sacrificing their paychecks to defend public education in Oakland and around the country. Instead the money extorted from teachers goes to pay the $300,000-plus salaries of the top executives of the California Teachers Association and the National Education Association and to fund the same Democratic Party politicians who have spearheaded privatization and charterization in the state.

Blanc repeats the lie of the unions and the school officials that teachers had to limit their expectations because the district simply didn’t have the money for more. According to the Jacobin columnist, “the Oakland Unified School District’s long-standing budget woes” made it “far from obvious that even another strong week of striking would have been enough to significantly change the content of the agreement.”

Jacobin, like the OEA, excludes and clearly opposes any challenge by the working class to the current distribution of wealth and allocation of resources enforced by the Democratic Party. This in the richest state in the country that 144 billionaires call home.

Blanc complains that “neither Governor Gavin Newsom, State Superintendent Tony Thurmond, nor the Democratic supermajority in the legislature took any significant action to back Oakland educators.” Quite true, but the OEA spent the entire strike trying to convince teachers to place their faith in these Democratic Party politicians, even though this big business party has starved public education of funding (California is 43rd in the nation in per pupil spending) while handing corporations billions in tax cuts and collaboration with billionaire school privatizers to establish the highest number of charter schools in the nation. On the federal level, the Obama administration carried out draconian attacks on teachers and public education.

Following January’s betrayal by the United Teachers Los Angeles (UTLA), the union attempted to channel anger towards the sellout contract into the election of Democrats onto the LA school board, such as Jackie Goldberg, who won Monday’s election with UTLA’s endorsement. The fact that gives the game away is that Thurmond, the California State Superintendent of Public Instruction, is also an endorser of Goldberg as well as the direct supervisor of Chris Learned, who possesses dictatorial oversight over all OUSD financial decisions.

That these self-same enemies of public education, to which the OEA directed its appeals, give nothing to the teachers it is to be expected, but for Jacobin, it becomes part of the “unfavorable political context” which justifies the rotten sellout imposed by the OEA.

Perhaps recognizing that such arguments do not hold much water, Blanc goes on to state, “Many Oakland teachers were understandably disappointed on Friday when they read the content of the final proposed agreement. But it’s important to keep in mind that this has been the case in every single education strike over the past year”—citing in particular West Virginia and Los Angeles.

Don’t be too concerned about the rotten sellout of the union, Jacobin argues, because you are not alone because the unions sold out every strike before you too! For Blanc, this is not an argument against the unions, but is somehow turned into a positive good. “These expressions of disappointment, and rank-and-file pushes for ‘No’ votes, are positive manifestations of the rapid empowerment and union engagement generated by these strikes.”

Voila! Outrage over a sellout by the OEA is a demonstration of “rapid empowerment” and “union engagement”! Presumably, the more rotten the sellout and the more outrage from teachers, the more proof of the unions’ “positive manifestations”!

Elsewhere, Jacobin states that the “big wins” are not really in the agreement but rather “lie elsewhere.”

The strike’s main achievement was in empowering thousands of teachers, support staff, and students. Activities like organizing an effective picket line, leading chants, building turnout for marches, and explaining strike demands to parents could not have happened without the rapid emergence of hundreds of new leaders.

Teachers and students should be satisfied with a rotten contract that paves the way for an escalation of the attack on public education because they have received the far more important lessons in leading chants and building turnout for marches! What patronizing and sickening complacency! Empowering, organizing, chanting—For what?

Jacobin and the DSA serve to provide a “left” cover for trade unions and the Democratic Party. Along with other organizations that comprise the pseudo-left, they represent the interests of affluent upper middle-class layers, including trade union executives and aspiring executives.

Blanc begins his piece with the statement, “Educators have felt their own power — and they have recognized their class enemies.”

It is true that teachers, students, and workers through the country and the world are beginning to recognize their class enemies, but not in the way Blanc thinks. If there is a positive outcome of the strike, it is that teachers and other sections of the working class will learn that among the “class enemies” are to be included not only the Democratic and Republican politicians, but also the unions themselves and those, like Blanc and Jacobin, who serve as their political attorneys.

In opposition to the craven support for the unions and the Democrats, the World Socialist Web Site Teacher Newsletter and the Socialist Equality Party fought for teachers to organize rank-and-file committees, independent of the unions, in order to mobilize the broadest sections of the working class in defense striking teachers, and to expand the strike to educators throughout the state and nationally. The committees, we insisted, had to fight for demand that teachers and students need, including full funding to public education, not what the corporate and political establishment and the unions claim is affordable.

The develop of a powerful movement of teachers, parents and students to fight for the right to high quality public education will require a genuine struggle for socialism, not the fake socialism of the DSA and Jacobin. This means building a powerful movement of the working class in opposition to both the Democrats and Republicans and the capitalist system they defend. The aim of such a movement must be the expropriation of the fortunes of the super-rich and the socialist reorganization of economic and social life to meet human needs, not private profit.

https://www.wsws.org/en/articles/2019/03/0...
Add Your Comments
Support Independent Media
We are 100% volunteer and depend on your participation to sustain our efforts!