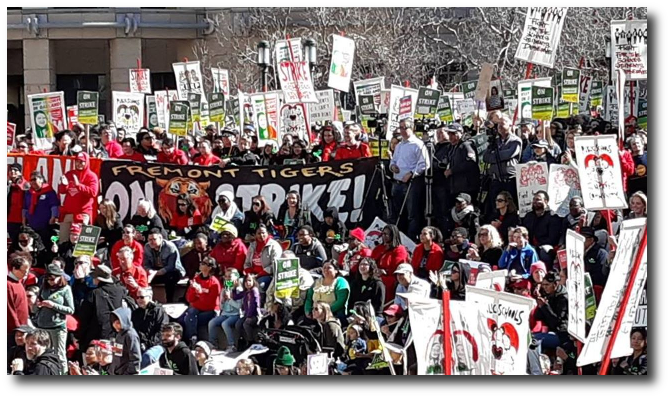 By Joseph Santolan at the World Socialist Web Site

On Sunday night, the Oakland Education Association (OEA) declared an end to the seven-day strike by 3,000 teachers after claiming that its sellout deal with the school board had been ratified. The announcement came after a mass membership meeting in the afternoon where the union bargaining committee was repeatedly booed and hundreds of teachers denounced the deal, which includes a de facto cut in real wages, does nothing about overcrowded classes or chronic understaffing, particularly of nurses. Most damningly, the deal gives the district and the powerful school privatization forces behind it a green light to impose deep budget cuts, close up to a third of the district’s schools and expand for-profit charter schools.

The OEA claimed that teachers had ratified the deal by a 58–42 percent margin with 70 percent of the membership voting. The result was met with deep suspicion from teachers because of the underhanded and undemocratic fashion in which the OEA counted the ballots. During the meeting, the election committee suddenly announced that the union had not reserved the theater for a sufficient amount of time to count the ballots in front of the membership. Instead, they said they were taking ballots to the OEA headquarters where they would be counted in a room that rank-and-file teachers would be barred from.

Even if the union’s dubious count is accepted, the abstention of 30 percent of the teachers means less than half of the striking teachers voted for what the union officials called a “historic victory.” Teachers who were feeling economic pressure after seven days on the picket lines with no union strike benefits, reluctantly voted for the deal because they knew the union would not bring back anything better.

OEA President Keith Brown, Vice President Ismael Armendariz and the bargaining team repeatedly told the assembled teachers that they should vote yes because there was no money available for anything better and that what the OEA had agreed to was as good as it was going to get.

The union rammed through the contract just in time for the school board to convene Monday morning to carry out $30 million in budget cuts and implement AB1840, which will place the financial trustee, Chris Learned, under the authority of Alameda County Superintendent Karen Monroe. Learned will have the power to veto any school board measure deemed fiscally irresponsible, including the pay raise in the new contract.

Twice in the past week, the school board attempted to convene to carry out these cuts, but the striking teachers, with the backing of parents and students, prevented the meetings from happening with mass pickets around the building. On Friday afternoon, as the school board attempted to meet for the second time, OEA sent out an announcement to its members declaring that they had reached a tentative agreement and that the picket lines should disperse. OEA President Brown rode to the site in a pickup truck and told the picketers to leave, but they defied his instructions and prevented the board from carrying out its cuts.

During a press conference on Friday evening, Brown admitted to a reporter that the budget cuts were effectively a quid pro quo to which the OEA had agreed in order to secure the tentative agreement.

During the mass meeting, the OEA nearly lost control of the situation. At one point, Brown hysterically denounced a fifth-grader for being in the meeting declaring she was “not a union member.” At another point, he cut off his own kindergarten teacher, a woman who had been teaching in Oakland since 1962, because she declared her opposition to the contract and called for a general strike before walking away from the microphone.

Members of the Oakland Rank-and-File Strike Committee, which was set up with the assistance of the WSWS Teacher Newsletter, won widespread support for denouncing the sellout and calling for teachers to spread the strike across the state and more broadly to defend the right of public education.

Teachers on Facebook Sunday evening expressed outrage at the announced results. One classified worker who engaged in a solidarity strike with the teachers wrote, “I feel betrayed. I feel used. I stuck my neck out in solidarity and Keith Brown left us high and dry … Keith Brown, you used me. I risked my job to stand by you and OEA. I am deeply hurt.”

Another wrote: “42% of the membership voted against—and among the yes votes many voted for it with a heavy heart. It is by no means a referendum.” Another wrote: “If this agreement is not a sellout then I don’t know what is. 1 student per class reduction. What happened to the demand for what is best for the students?”

The actions and statements of the OEA demonstrate once again that the unions do not “represent” teachers or any other section of workers but function as the direct agents of the corporate elite and political establishment in imposing austerity and looting public assets.

Over the past year of teachers struggles, each one isolated and shut down by the unions, there has emerged a familiar pattern. The union will announce that the district or the state simply does not have any money. They parade Democrats in front of teachers claiming they are friends of public education, and then shut down the strike on miserable terms, in order to prevent more than one section of teachers from being on strike at the same time.

The OEA and the California Teachers Association, and its parent union, the National Education Association, rushed to shut down the Oakland strike as teachers in Sacramento, Fremont and other districts are pressing for strike action against state Democrats that control the governor’s office and have a super-majority in both houses of the state legislature. The sellout in Oakland follows the union betrayal of the strike by 33,000 teachers in Los Angeles last month, which was followed by the announced plan to break up the country’s second largest school district in order to facilitate privatization.

The struggle in Oakland is far from over. There are already plans for teachers to organize sickouts to protest today’s school board meeting. The efforts to implement draconian budget cuts and school closures will provoke popular opposition. Millions know that the claims by the Democrats and Republicans and the unions that there is no money is a cynical lie given the vast personal fortunes of the Silicon Valley moguls and the grotesque levels of social inequality that prevail in the San Francisco Bay Area.

After a record number of teacher strikes in 2018, over 70,000 teachers have already gone on strike in the US since the beginning of the year, part of a global rebellion of teachers and far broader sections of the working class against austerity and social inequality.

The betrayal of the Oakland strike, like all the rest before them, underscore that teachers have to build new organizations of struggle, rank-and-file committees, which are independent and opposed to the unions and both big business parties. Such committees must fight for what teachers and their students need—fully funded public education, smaller class sizes, an end to punitive evaluation schemes, the removal of profit from education and the conversion of charter schools back into public schools.

Securing the funding for high-quality public schools will necessitate a frontal assault on the wealth, power and private fortunes of the super-rich. To fight for this, every section of the working class must be united, and preparations made for a general strike by all workers to defend public education and all the social rights of the working class. This must be combined with the building of a powerful political movement of the working class aimed at taking power and replacing capitalism with socialism.

https://www.wsws.org/en/articles/2019/03/0...
Add Your Comments
Support Independent Media
We are 100% volunteer and depend on your participation to sustain our efforts!