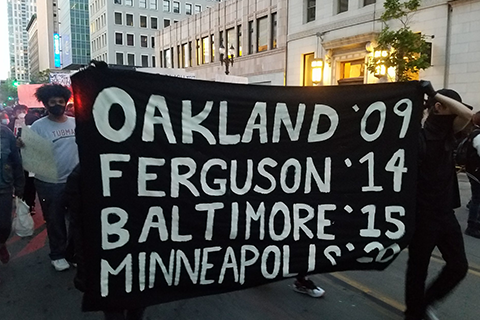 Demonstrations continue around the Bay Area in the name of George Floyd, with tens of thousands taking to the streets. Protests in every corner of the Bay Area have been met with police force. Demonstrators say they won’t be stopping despite the risks posed by police attacks and the COVID-19 pandemic because racist police violence, which has long posed a dire health threat, must be countered.

Anti Police-Terror Project wrote: If you are watching what’s unfolding in Minneapolis, you may be wondering why people break social distancing guidelines to protest police violence. The Minneapolis Police Department, like police departments across the country, have a long and bloody history of the killing of Black bodies including Jamar Clark and Philando Castile. And here in the Bay Area, we are still reeling from the murder of Steven Taylor in San Leandro and the shooting of one Black person and one Chicanx by the Hayward Police Department.

The largest demonstrations have been held in the Oakland and San Francisco, but there have been protests big and small in the cities of Walnut Creek, Mountain View, Palo Alto, East Palo Alto, Menlo Park, San Carlos, and Redwood City. In the South Bay city of San Jose, police responded to demonstrations with flashbang grenades, tear gas, and crowd control projectiles. In addition to the Bay Area, there have been Central Valley protests in Bakersfield and Fresno. Thousands have protested in coastal Santa Cruz County.

George Floyd Solidarity in the Bay Area: Representation and Power |

George Floyd's Murder: Hitting the Streets of Oakland and Wanting a World Worth Fighting For |

Enough Is Enough! Thousands Speak Out & Rally In SF Against Murder of George Floyd |

Protesters March on Zuckerberg's House, Call Him Out for Donating Millions to Police

Protesters in Palo Alto Masked Up and Close Together |

Protesters March on Zuckerberg's House, Call Him Out for Donating Millions to Police |

Gravestones in Garden for George Floyd and Others Murdered by Police Pt. I |

Gravestones in Garden for George Floyd and Others Murdered by Police Pt. II

Vigil for George Floyd in Fresno