Add an Event
Newswire
Calendar
Features
Home
Donate
From the Open-Publishing Calendar
From the Open-Publishing Newswire
Indybay Feature
Related Categories: Peninsula | Police State & Prisons | Racial Justice
Gravestones in Garden for George Floyd and Others Murdered by Police Pt. I
by Palo Alto Report
Monday Jun 1st, 2020 12:58 AM
In Palo Alto on May 31, the Raging Grannies and members of the Women's International League for Peace and Freedom paid respect to 8 Black Americans murdered by police, including two women. There are many more whose names should not be forgotten. 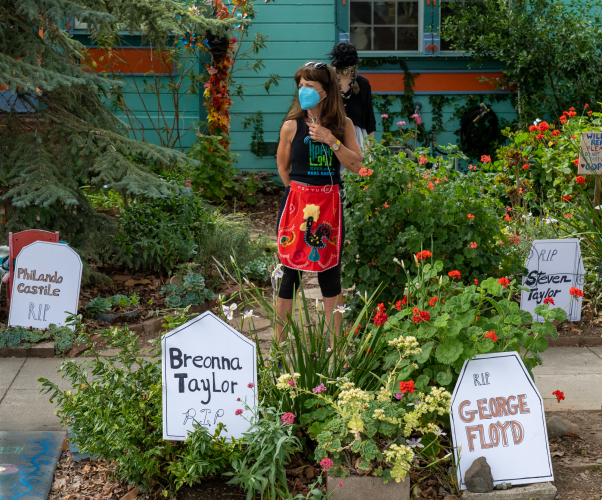 It was to be a short silent vigil. But neighbors in Palo Alto mourned together for about 45 minutes on May 31 when they gathered to pay their respects to George Floyd and other Black Americans murdered by police.

Raging Grannies announced that they join with sisters in Radical Feminists in calling for all Americans to unite for real police accountability. They invited neighbors to step up beside a grave. They sang "We Shall Overcome" and a Spanish/English version of "We Shall Not Be Moved/No Nos Moveran."

Together the group voiced the names of the murdered for whom they erected headstones, acknowledging that there are many more.

Say his name! George Floyd, Philando Castile, Jamar Clark, Steven Taylor, Chinedu Okobi, Oscar Grant. The last three names are most familiar to the Grannies. Of the 8, Steven Taylor was killed the most recently in San Leandro. The Grannies were on the streets protesting when Oscar Grant's killer, a BART policeman, got off lightly. Last year, the Grannies led chants and songs at a sit-in in the office of the District Attorney of San Mateo County when Chinedu Okobi was murdered by police taser in San Bruno.

Say her name! Sandra Bland. Say her name! Breonna Taylor. The Grannies reminded their audience of neighbors that Black women die at the hands of police and are sexually harassed and assaulted by them in devastating numbers. Trans and queer people of color such as Tony McDade are also common targets.
§Granny K places the headstones she created for this event
by Raging Grannies
Monday Jun 1st, 2020 12:58 AM 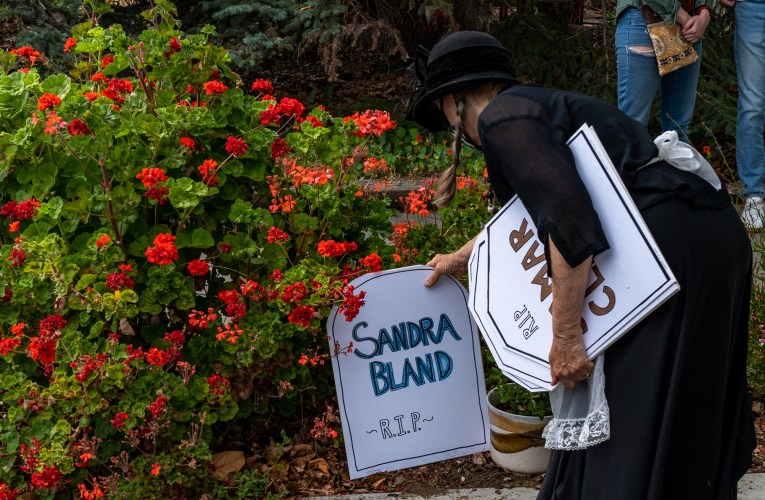 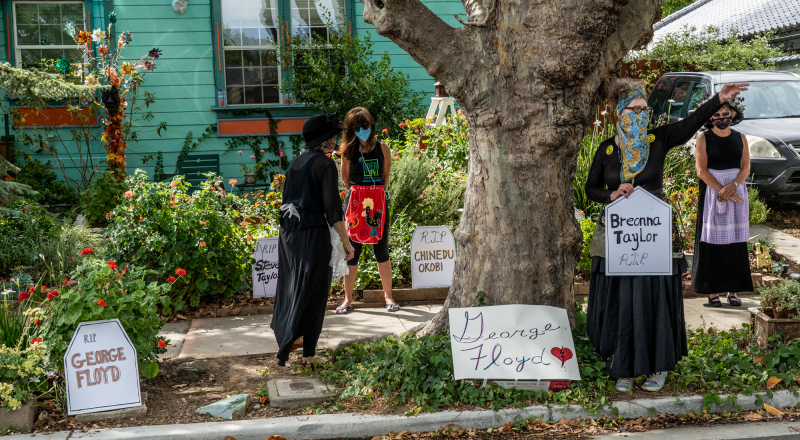 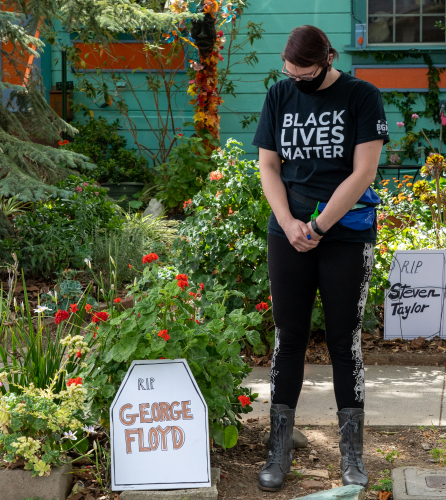 original image (2000x895)
Add Your Comments
Support Independent Media
We are 100% volunteer and depend on your participation to sustain our efforts!