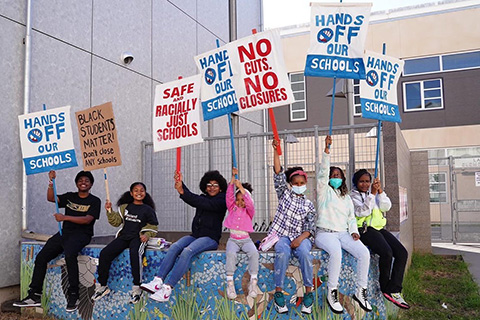 In February, the board of the Oakland Unified School District voted to close ten schools and reshuffle those remaining in the coming years. The first two scheduled for closure were Parker Elementary and the Community Day School. Parker has been open for nearly 100 years. On May 25, the last day of class and the last official day for Parker, several families decided to take matters into their own hands. After graduation ceremonies, they occupied the school and set up tents outside.

Families and community supporters created an unofficial Parker Community School on the premises, offering a variety of classes and other opportunities for local students throughout the summer. Without warning, on August 4, OUSD sent a team of private security guards into the school. Organizer and community member Max Orozco, parent of a child at La Escuelita, another school affected by OUSD’s budget cuts, was detained inside the building. Concerned community members tried to get into the school to make sure he was safe and several were assaulted by the security guards. At least 11 were injured. When Orozco was escorted by Oakland police into a squad car, he was in handcuffs and his face was bloodied.

Despite the attack, the occupation at "Parker Liberation School" has continued and supporters continue to protest the closures.

Go to Parker School in Oakland NOW! OUSD security has shown up! |

The War On Teachers & Guns: An Oakland Teacher & Iraqi Marine Vet Speaks Out |

Parker for the People |

SLAP: Schools and Labor Against Privatization