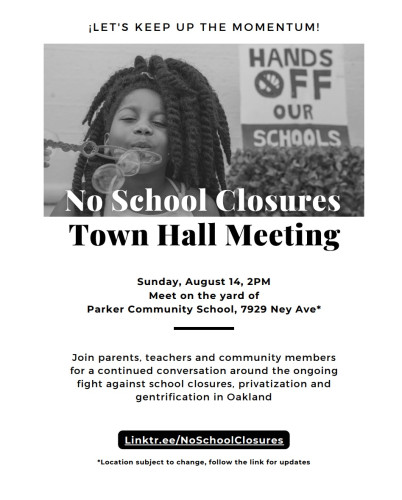 original image (948x1179)
At the direction of Chief Governance Officer Josh Daniels and Superintendent Kyla Johnson-Trammell, OUSD sent private security to the Parker Liberation school to physically remove activists from the building. Security acted incredibly aggressively, attacking parents and community members, unlawfully detaining a parent and candidate for school board and causing physical injuries to numerous individuals. Security called OPD, and as they opened the building, the group of people who were amassed outside entered the building and were met with excessive force by the OUSD security forces.

“They tried to throw us out, but we held the building! Now, OUSD is threatening to come back,” stated organizers at the newly-organized Parker Elementary School, one of several schools serving Black and Brown Oakland communities closed, citing “budget cuts.”

Meanwhile, the district has fired at least two educators who are active participants in the fight against school closures, including the Parker Liberation in East Oakland. These educators, by virtue of their positions as a substitute teacher and a contractor, have no safeguards in their job security and were given no explanation for their termination.

If you don’t think a public school district should be sending private security after community members or firing teachers for protesting school closures, make your voice heard!

Send a letter to OUSD leadership demanding that they reverse their decision and cease retaliating against anyone involved in protesting school closures: http://tinyurl.com/noretaliationOUSD.


No School Closures — Oakland Parker Town Hall Meeting
Sunday, Aug 14, 2pm
https://www.indybay.org/newsitems/2022/08/09/18851504.php
Add Your Comments
Support Independent Media
We are 100% volunteer and depend on your participation to sustain our efforts!