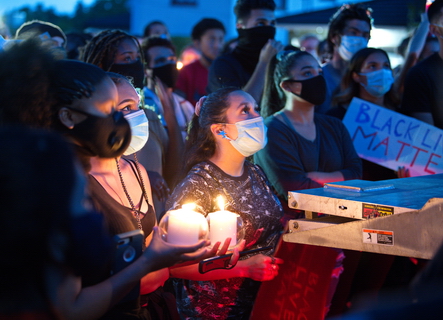 On June 10, as demonstrations continue daily across the country in response to the police murder of George Floyd in Minneapolis, a large contingent of Oakland's young people marched on Mayor Libby Schaaf's house to demand that police be removed from the city's schools. Shouting marchers, followed by a car caravan, worked their way up Fruitvale Avenue towards the home demonstration. Speakers at the vigil in front of the mayor's house denounced the millions of dollars spent on police, the school to prison pipeline, and demanded that the money go instead to real human needs.

Carts and cars supplying free water, snacks, and first aid assistance accompanied the trek of over a thousand people. After the vigil, protesters left candles symbolizing police murders on the mayor's front steps and protest signs in the yard. Candles were left unlit to avoid potential accusations of arson. There were no arrests and uniformed police were not seen during the action, other than California Highway Patrol guarding I-580 on- and off-ramps as the march passed.

Update: On June 24, the Oakland Unified school board voted to disband their police department.

Oakland Youths in Protest to Rid Schools of Police |

Related Feature: Uprisings Explode Across the Country After Murder of George Floyd