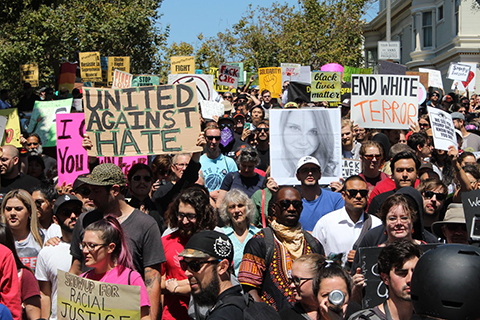 No Hate in the Bay: A Victorious Weekend of Resistance to Fascism
White-Supremacists' and Other Fascists' Return to the Bay Area Fizzles in SF and Berkeley

White-supremacist and other fascist groups have repeatedly targeted the Bay Area in recent months, most recently announcing a weekend of provocations for August 26 in San Francisco and August 27 in Berkeley. As in Boston regarding a planned fascist rally on August 20, anti-racist organizers in the Bay Area responded with a call for massive counter-demonstrations in the streets. The planned weekend of anti-fascist resistance included Charlottesville benefit events in SF and Oakland. In the end, white nationalist organizers cancelled their own events at the last minute and the smattering of racists who did show up in both cities were promptly run off by anti-fascists.

The pro-Trump group "Patriot Prayer" scheduled a "Freedom" rally at Crissy Field in the Presidio. Their previous events in Portland and Seattle attracted neo-Nazis, white supremacists, militia groups, and "Alt-Right" trolls. Organizers of the San Francisco rally cancelled their event the night before, claiming instead they would hold a press conference in Alamo Square Park, which they also cancelled after groups including San Francisco Against Hate and the ILWU called for a counter-protest and march to the park. Thousands turned out for multiple marches in San Francisco to demonstrate against the upsurge in racist hate across America. The twenty or so fascists who did appear at Crissy Field later in the day were chased away by local anti-racists.

The following day, white supremacists, Alt-Right activists and neo-Nazis planned to hold a “No to Marxism in America” rally at Martin Luther King Park in Berkeley. In response, a coalition of Bay Area anti-racist and anti-fascist groups, including SURJ, called for a demonstration of united resistance to hate in the Bay, denying the fascists a platform to further their racist agenda. As in San Francisco, the organizer of the fascist rally in Berkeley claimed the night before her event that she didn't want people to go, saying she would still attend herself. Thousands turned out, including a large black bloc contingent that cleared Civic Center park of the few racists who did show up.

The Anti-Repression Committee is currently fundraising to support anti-fascist arrestees.

Victory Against White Supremacy in the Bay |

Rally Against Hate in Fresno |

Original counter-demonstration and benefit announcements: No Hate in the Bay: A Weekend of Resistance to Fascism |

Left of the Dial: Antifascist Benefits for Charlottesville