by No Nazis, No KKK
What happens when folks follow the advice of hand-wringing liberals and ignore Nazis? What happens when militant antifa forces do no present themselves to repel Nazis from rallying in public spaces? The Nazis feel empowered to brutally assault anyone who objects to their genocidal fantasies, as was shown in Charlottesville the night before a Nazi murdered Heather Heyer. On August 11, 2017, a horde of Nazis with tiki torches expressed their "free speech" rights by chanting Nazi slogans, then proceeded to surround and viciously attack a small group of University of Virginia students brave enough to counter-protest Nazi hate. 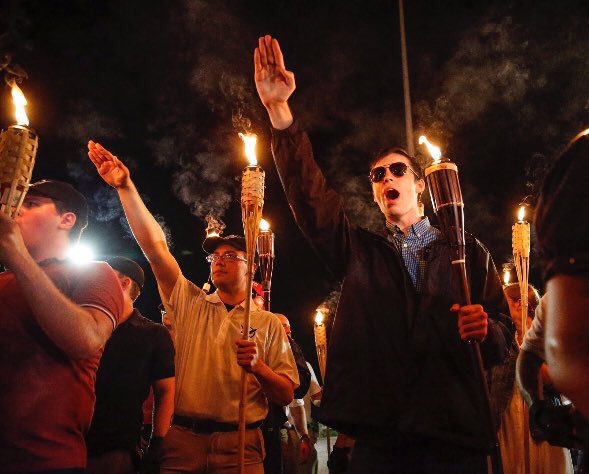 Photo via @MissesThe90s. Note that sources cited may not be the original author of various media.


Not that anyone at this website needs convincing but, for posterity, this is what the current king of US bigots had to say on August 12, responding to James Alex Fields of Ohio ramming his car into a crowd of anti-racism counter-protesters, killing Charlottesville native Heather Heyer and injuring at least 19 others.

"We condemn in the strongest most possible terms this egregious display of hatred, bigotry and violence on many sides. On many sides," Trump said. It was an important enough message to Trump that he repeated himself.

From the lobby of Trump tower three days later, Trump doubled down about the day Heather Heyer was murdered: "I think there is blame on both sides. What about the 'alt-left' that came charging at, as you say, the 'alt-right,' do they have any semblance of guilt? What about the fact they came charging with clubs in hands, swinging clubs, do they have any problem? I think they do. You had a group on one side that was bad and you had a group on the other side that was also very violent. Nobody wants to say it, but I will say it right now."

Against all evidence to the contrary, Trump declared, "Not all of those people were neo-Nazis, believe me. Not all of those people are white supremacists, by any stretch." Some of them, Trump would have us believe, innocently march and rally with blatant racists who throw up the Sieg Heil salute, chant "Blood and Soil," and pummel counter-demonstrators. Trump's supposed non-Nazis came from all over the country merely to show support for the preservation of a monument to the Confederacy’s top general Robert E. Lee, the statue itself being nothing more than a historical symbol untethered to a racist value system, then or now. Bullshit.

Not altogether different, many liberals would have us believe that Nazis or those who openly collaborate with them are "peaceful right-wing demonstrators," perhaps because they are not at that moment actively beating people or carrying out ethnic cleansing, instead merely trying to increase their numbers to be better able to assault people and commit genocide in the future.

Aghast about the events in Berkeley on August 27, after black bloc antifa forces chased fascists out of Civic Center park, politicians and liberals in the Bay Area and across the nation widely made the same point as Trump, arguing that radical anti-racist forces on the left were as dastardly as, or worse, than Nazis themselves.

This false equivalency has become second nature amongst Clintonites, Democratic party loyalists, and the like who love little as much as punching left, positioning themselves as oh-so-sensible centrists, such as MSNBC host Joy-Ann Reid, the Nation's Joan Walsh, Talking Points Memo's Josh Marshall, Media Matters' Eric Boehlert, and Markos Moulitsas of Daily Kos fame.

Ignore nazis? Shame and snitch on those willing to fight them? Hell no! Better to ignore the liberal appeasers instead and fight Nazis on every front possible. Chase them back into their holes. Keep the targets of their hate safe.
Related Categories: East Bay | U.S. | Global Justice & Anti-Capitalism | Police State & Prisons | Racial Justice
§Marching across UVA campus in the dark of night, hell-bent on terrorizing Charlottesville
by No Nazis, No KKK 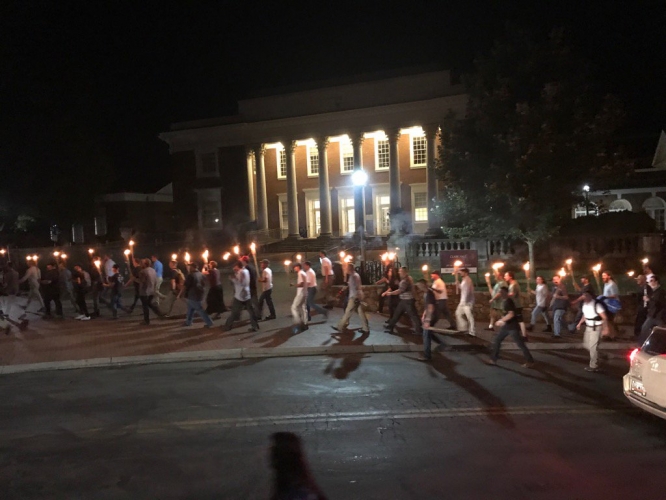 original image (1024x768)
Photo via @JoeHeim.
§"Unite the Right" marchers stopped to chant outside of this church full of parishioners
by No Nazis, No KKK
Copy the code below to embed this movie into a web page:
Download Video (7.8MB) | Embed Video
Video via @robertdlewis.
§Virginia Students Act Against White Supremacy ringed the Robert E Lee statue
by No Nazis, No KKK 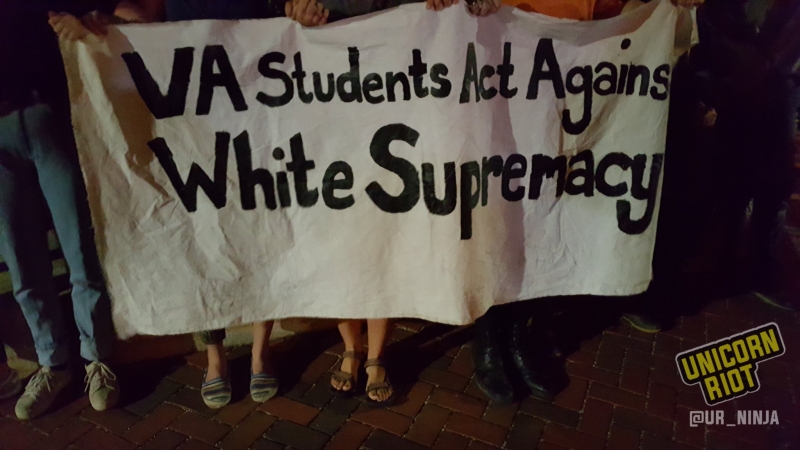 original image (2048x1152)
Photo via @UR_Ninja.
§Hundreds of torch-bearing Nazis surround the anti-racism students
by No Nazis, No KKK 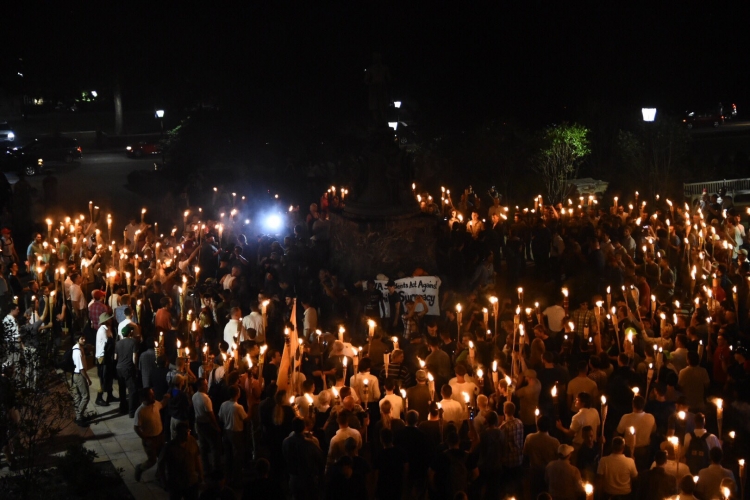 original image (1620x1080)
Photo via @aletweetsnews.
§These students deserve their own statue
by No Nazis, No KKK 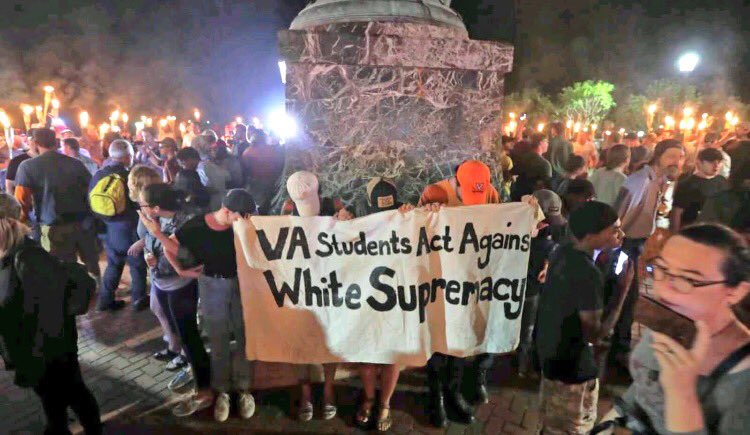 Photo via @foynicole.
§Nazi "free speech" is only a means to recruit larger numbers to better brutalize others
by No Nazis, No KKK
Copy the code below to embed this movie into a web page:
Download Video (2.8MB) | Embed Video
Video via @Delo_Taylor.
§Clean-cut, white, American terrorists bringing their "fire and fury"
by No Nazis, No KKK 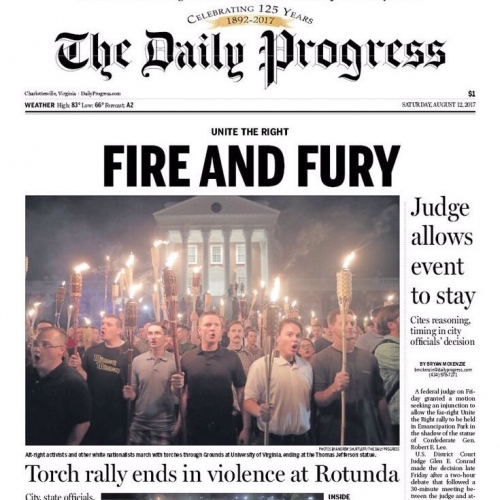 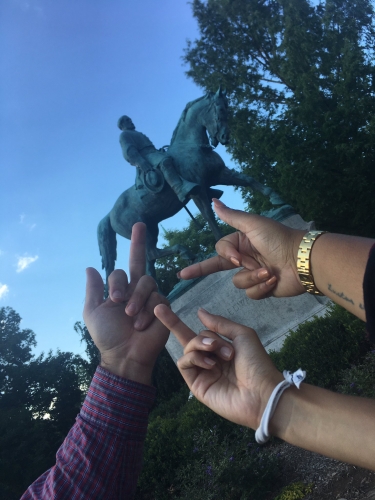 original image (1536x2048)
Photo via @sparrowmedia.
Add Your Comments
Latest Comments
Listed below are the latest comments about this post.
These comments are submitted anonymously by website visitors.
TITLE
AUTHOR
DATE
Liberals do Nazis' work for them by helping conceal their true identity
@
Support Independent Media
We are 100% volunteer and depend on your participation to sustain our efforts!