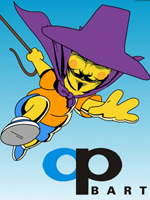 The San Francisco Bay Area, historic birthplace of the Free Speech movement and a pioneer in the digital age, is now apparently the first place in the United States to have had its electronic communications deliberately disabled to preempt a political protest. As an act of prior restraint against potential protester free expression, the Bay Area Rapid Transit agency cut power to the underground mobile phone antennas within the BART system for several hours on August 11th, denying tens of thousands of evening commuters access to the Internet, telephone service, and even 911 calls.

Civil liberties organizations such as the Electronic Frontier Foundation (EFF) and the American Civil Liberties Union (ACLU), as well as the hacktivist group known as Anonymous, are now vociferously objecting. Besides the public shaming BART is now receiving across the Internet in an ever-growing number of articles and op-eds, FCC, legal, and hacktivist repercussions for the agency may be yet to come. The protest BART said was the reason for disrupting mobile service never happened.

BART lied repeatedly about having cut power to the communications antennas to which they have access. A BART official first denied that the agency had even disabled mobile phone service. Later, regarding whom at the agency ordered the service shutdown, BART police Lt. Andy Alkire told a TV news station that the decision came from the media relations department. BART spokesperson Linton Johnson attempted to deny knowledge of where the decision came from, but then admitted that his department "suggested" it when confronted with Alkire's statement. The next morning, BART followed up by releasing a written statement claiming that it had asked mobile phone carriers to cut service for them. BART's deputy chief communications officer James Allison then fessed up that "BART staff or contractors shut down power to the nodes," adding that BART notified cell carriers after the action was taken. A spokesperson for Sprint, however, said that Sprint "learned about the service disruption from the news."

In "remembrance [of] the blood that is on the hands of the BART police" and to "stand up for your rights and those of your fellow citizens," Anonymous threatened to "remove" BART's website and called for flooding BART's communications systems with faxes, emails and calls, as well as a peaceful protest at Civic Center station. On August 14th, the myBART.org website was hacked. On August 15th, a protest was held in San Francisco that shut down four downtown BART stations during the evening commute. On August 17th, the BART Police Officers' Association website was hacked.

A second physical protest was held on Monday, August 22nd outside of the Civic Center BART station. Four arrests by BART police were witnessed on the Civic Center station platform when demonstrators spoke out against BART, and over 30 people who had marched for hours in downtown San Francisco were arrested on Grove Street at about 8:30pm by SFPD. At least two stations were shut down by BART during the demonstration. A third protest was called for Monday, August 29nd, at 5pm outside of the Civic Center BART station. Demonstrators marched down sidewalks to three BART stations, none of which were closed by BART. At the Embarcadero station, BART police arrested two protesters for speaking out against BART police violence. On Labor Day, September 5th, Anonymous called for the fourth Monday OpBART demonstration at Civic Center plaza in San Francisco. The turnout was low, and there was no march or attempts to enter any BART stations. There were no arrests. A few people were interviewed by the corporate media. A sixth OpBART was held on September 19th, when activists handed out fliers to passengers on trains and in stations. The actions are expected to continue every Monday at 5pm starting at Civic Center plaza.

Read More: BART Pulls Plug on Cell Phone Antennas - You Can Always Count on BART to Step In It | Anonymous message to the BART police |

No Decision from BART Board on Phone Shut Down, Board Seems to Lean Against, 8/24/11: audio |

A separate Anonymous action has been called to protest the Fullerton police killing of Kelly Thomas.