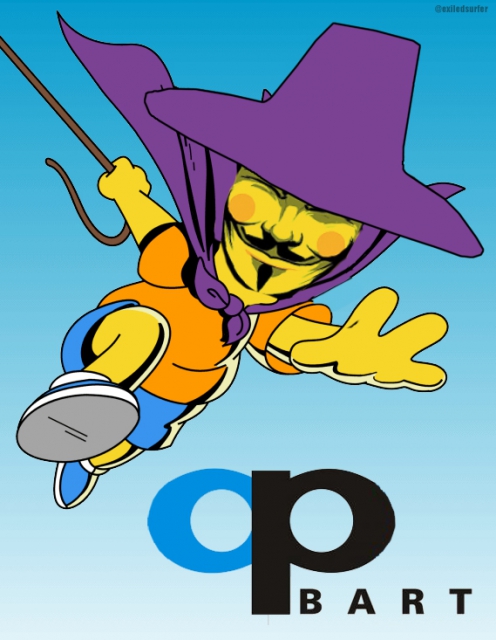 The past year has brought about some substantial awareness through some unfortunate events that have occurred throughout our world.  From internet censorship to the unnecessary violence inflicted upon unarmed civilans, we’ve all seen what can happen once a portion of us are gagged.

In Egypt and Tunisia, we saw people struggling to make their voices heard.  We have seen companies such as Telecomix delve into the nastiness of political corruption in an attempt to free those censored individuals from their prisons of silence.  We seen social media such as FaceBook and twitter explode with users from around the world speaking out against censorship.

Today, we’ve seen America come alive.  In the Bay Area, we’ve seen people gagged, and once more, Anonymous will attempt to show those engaging in the censorship what it feels like to be silenced. #OpBART is an operation geared toward balance - toward learning.  You do not censor people because they wish to speak out against the wrongs the wrongful things occurring around them.  The Bay Area Rapid Transit has made the conscious decision of ordering various cell phone companies to terminate services for the downtown  area inhibiting those in the area from using cell phones - even in the case of an emergency.

We will not tolerate censorship.
We will do everything in our power (we are legion) to parallel the actions of censorship that you have chosen to engage in.
We will be free to speak out against you when you try to cover up crimes, namely on behalf of  those who have engaged in violence against a mostly unarmed public.
We will set those who have been censored free from their silence. That’s a promise.
Anonymous demands that this activity revolving around censorship cease and desist and we know you are already planning to do this again.
We will not issue any more warnings.


TO THE PEOPLE OF SAN FRANCISCO:

People of San Francisco, join us Monday, August 15th at 5pm for a peaceful protest at Civic Center station to illustrate the solidarity with people we once knew and to stand up for your rights and those of your fellow citizens.

We will be wearing “blood” stained shirts for remembrance to the blood that is on the hands of the BART police.

For the people outside of San Francisco, show solidarity by using black fax, email bombs, and phone calls to the BART Board of Directors. BART decided to cut off your communications and now we will flood theirs.

We request that you bring cameras to record further abuses of power by the police and to legitimize the protest. The media will certainly spin this in an attempt to make our actions appear to be violent or somehow harmful to the citizenry at large. Remember, this is a peaceful protest. Any actions trying to incite violence in our protest are not of our people, and they ought to be discouraged.

File a complaint with the FCC online against BART:

send us your pictures

http://youranonnews.tumblr.com/post/885013...
Add Your Comments
LATEST COMMENTS ABOUT THIS ARTICLE
Listed below are the latest comments about this post.
These comments are submitted anonymously by website visitors.