Add an Event
Newswire
Calendar
Features
Home
Donate
From the Open-Publishing Calendar
From the Open-Publishing Newswire
Indybay Feature
Publish to Newswire
Add an Event
Related Categories: San Francisco | Police State & Prisons
Anonymous' Second OpBART Protest Shuts Civic Center for Hours, 8/22/11: photos, 1 of 2
by dave id
Thursday Aug 25th, 2011 1:19 AM
Anonymous called for a second BART protest on August 22nd. One group gathered on the platform of the Civic Center station underground while another gathered above on Market Street. BART police, determined to make arrests, told protesters on the platform that displaying a banner or raising their voices were arrestable offenses. As soon as one demonstrator began to chant, BART riot police moved in and made the first arrest. Three similar arrests later and BART police ordered the station closed. By the time those in the station evacuated, demonstrators at street-level had already begun to march up Market Street to other downtown BART stations. While only two stations were closed by BART, Civic Center station remained closed much later into the evening than at the prior Anonymous protest. These photos cover the demonstration on the platform, leafleting on Market Street and in Powell Street station, and a later march that began in the evening. 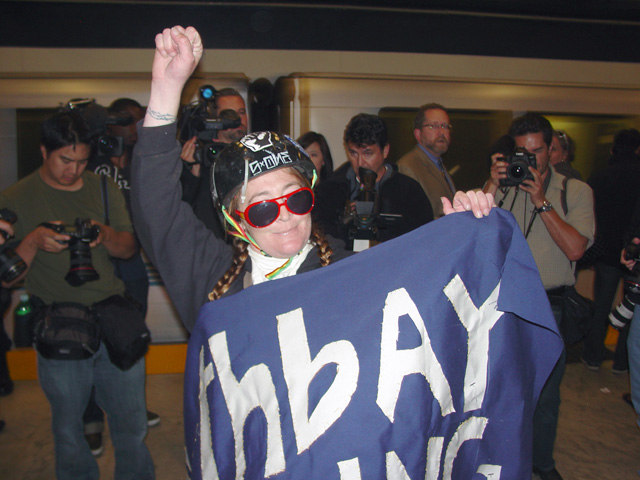 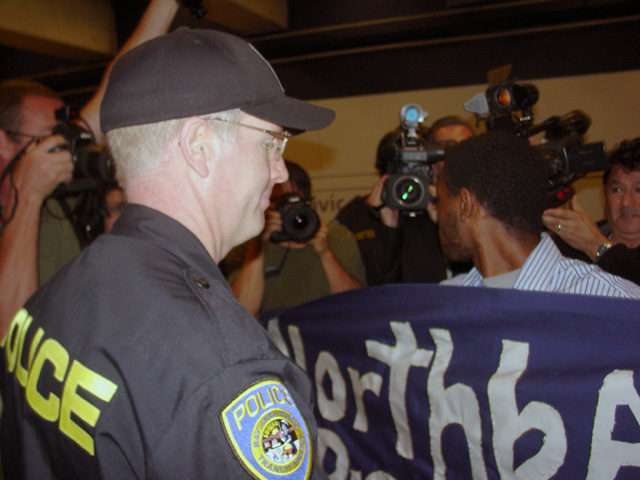 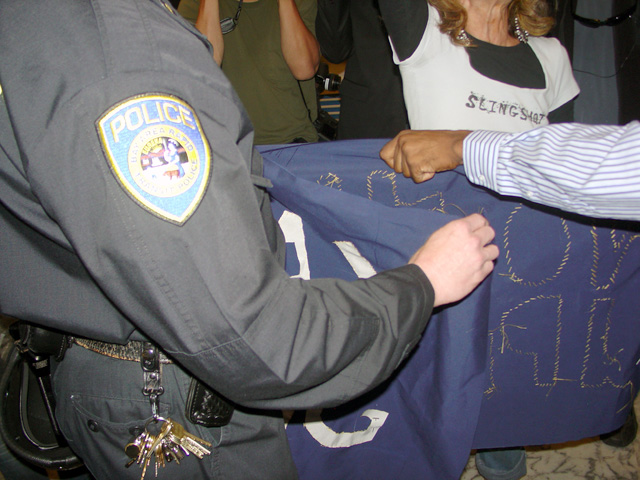 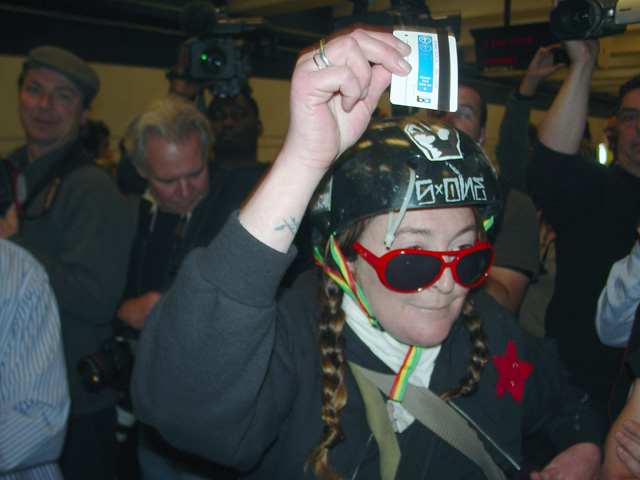 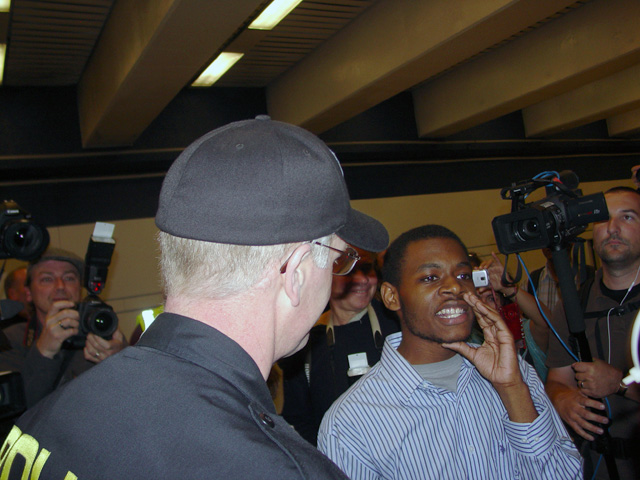 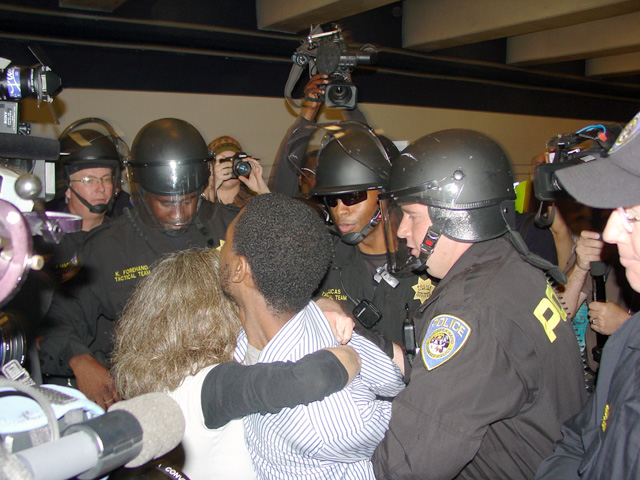 http://www.indybay.org/newsitems/2011/08/1...
§Being taken up escalator to be charged with trespassing (second arrestee charged with felony lynching)
by dave id Thursday Aug 25th, 2011 1:19 AM 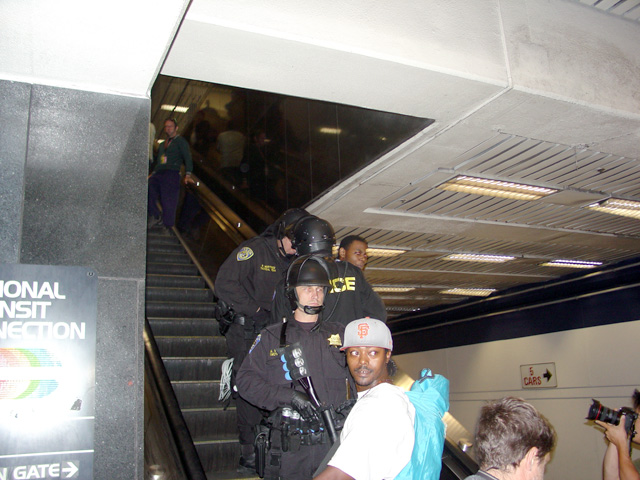 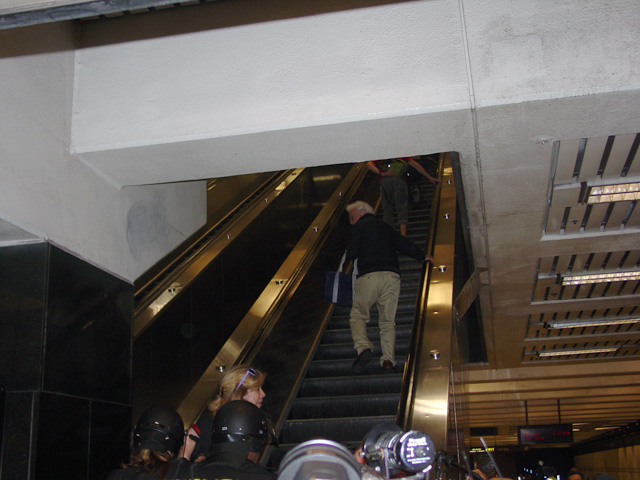 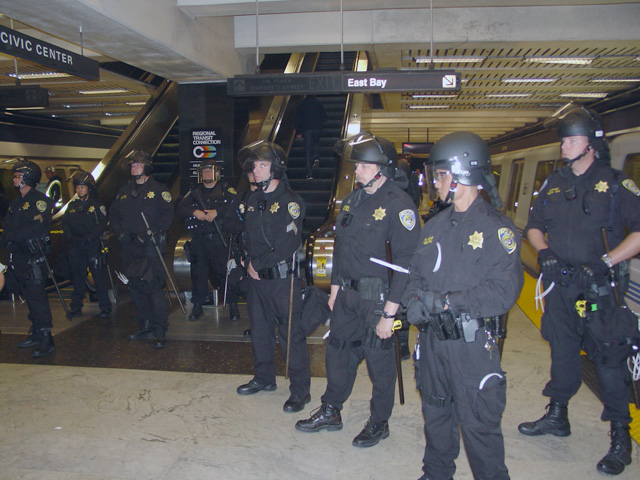 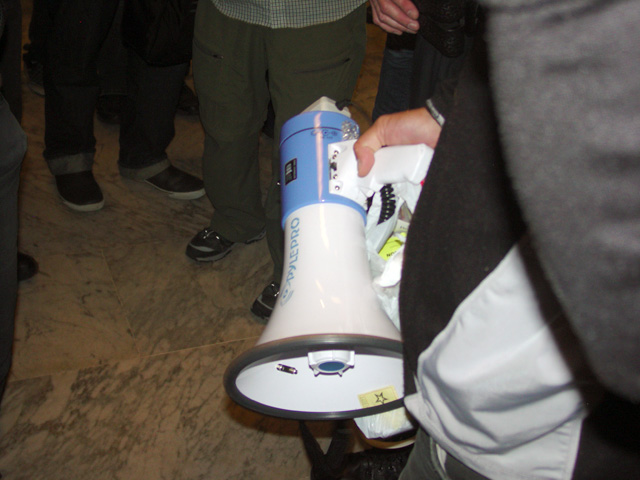 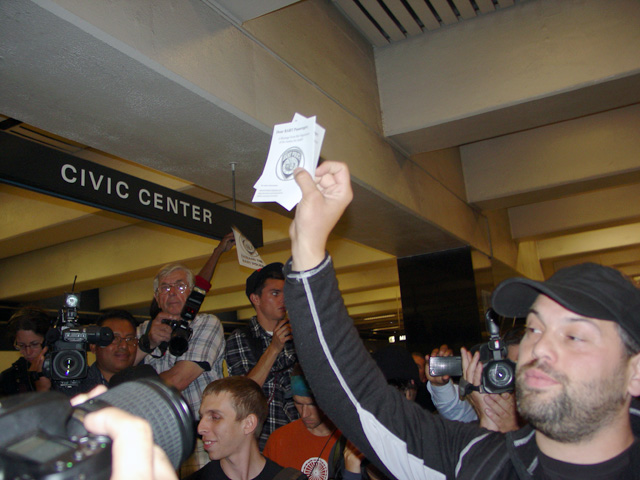 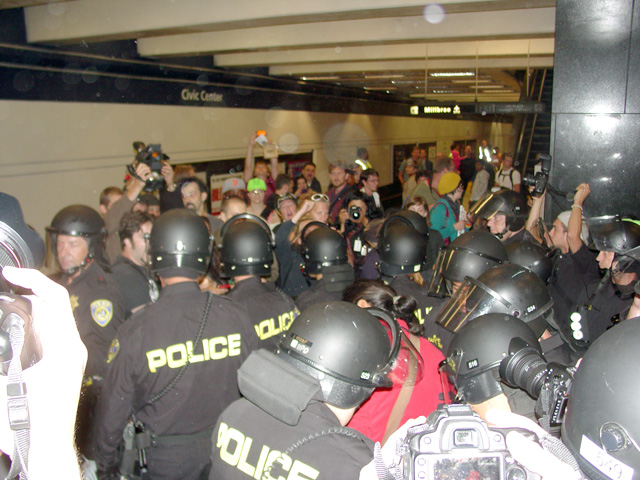 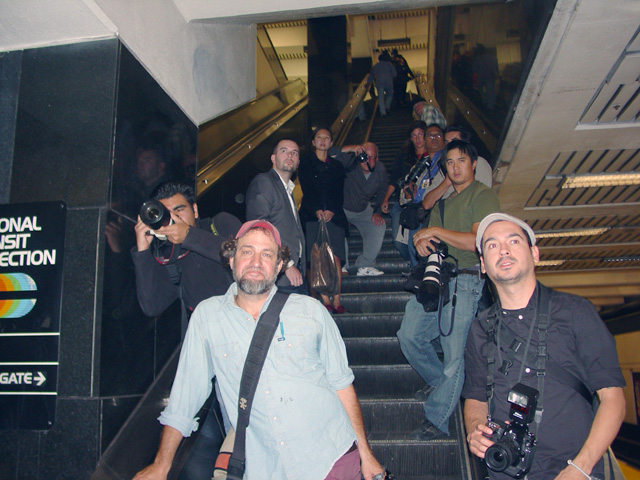 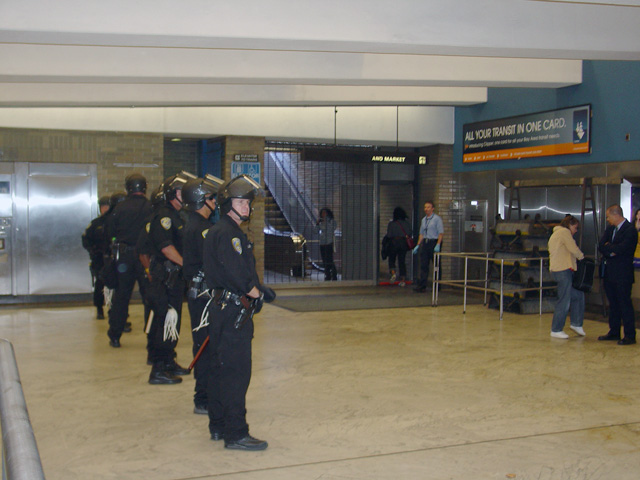 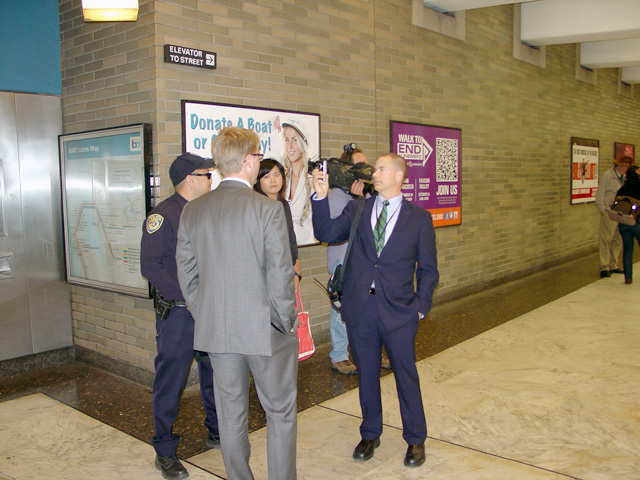 Think calling Allison a liar is unfair? Well, this is what he told one reporter:

"At least one or two were using amplified devices to shout on the platform level, which creates a dangerous situation" and could prevent riders who are hearing impaired from hearing train announcements, Allison said.

To be perfectly clear, while there was a bullhorn present, not one single person used any sort of amplification device on the platform to voice their concerns with BART.

And as for issues with safety for the hearing impaired, apparently it was BART who acted with complete disregard for such disabilities when they shut down phone service on August 11th. http://www.indybay.org/newsitems/2011/08/24/18688603.php 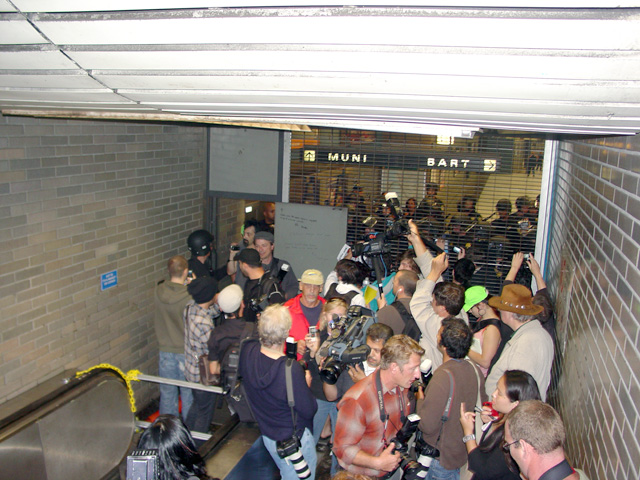 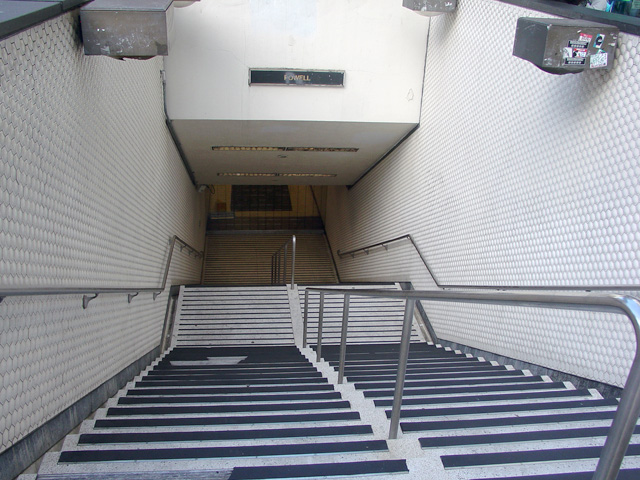 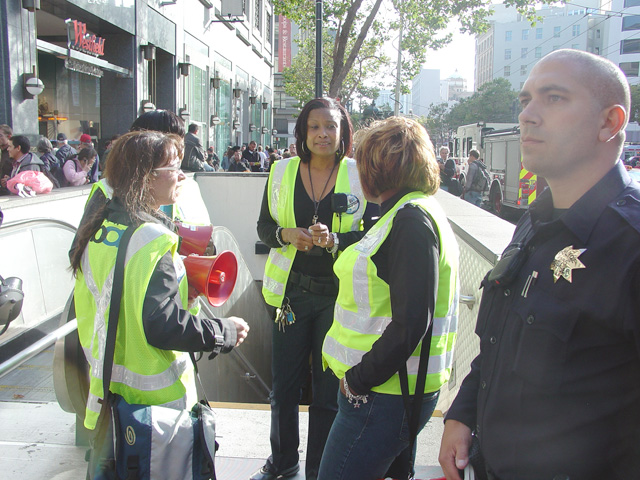 original image (1924x480)
During the forced evacuation of Civic Center, everyone was pushed to bypass ticket gates, so tickets were not be marked as having exited station. Therefore, those with unmarked tickets could not re-enter the system through ticket gates.

Here, one station agent quickly became an agent and a riot cop, then two riot cops and a Homeland Security cop, then even more, until a small platoon assembled on the Powell platform below. 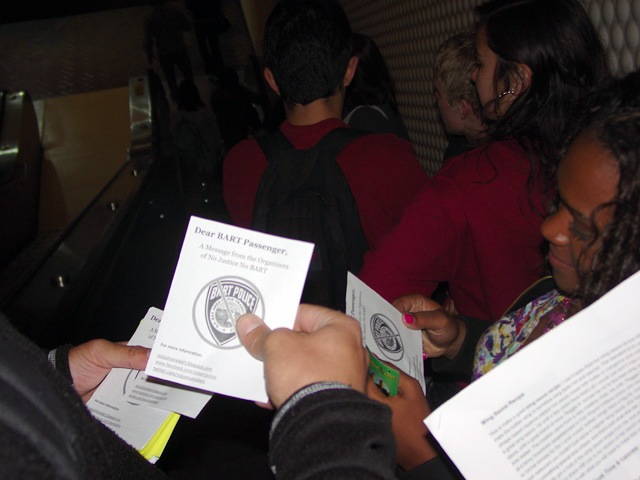 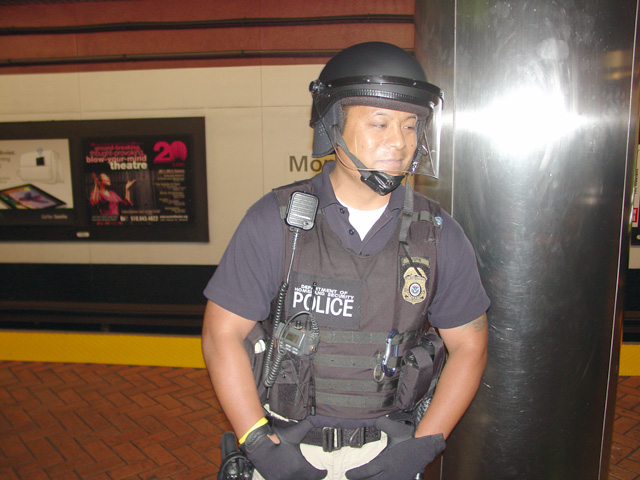 He said he was from a VIPR/"Viper" division of DHS. http://en.wikipedia.org/wiki/Visible_Intermodal_Prevention_and_Response_team 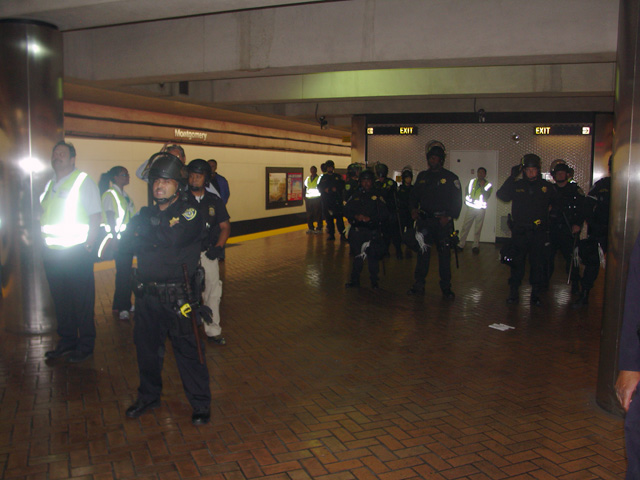 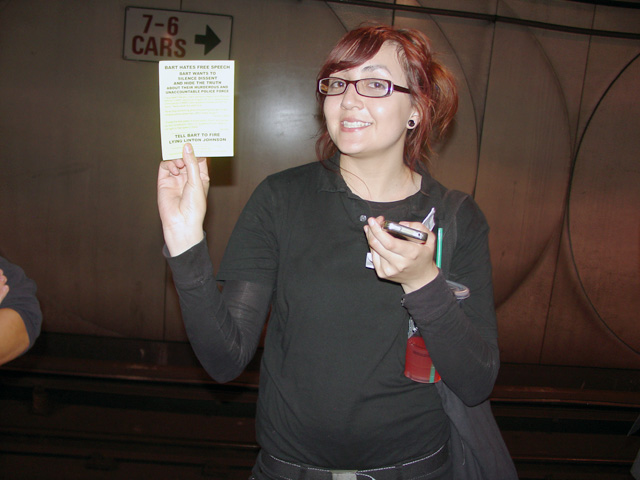 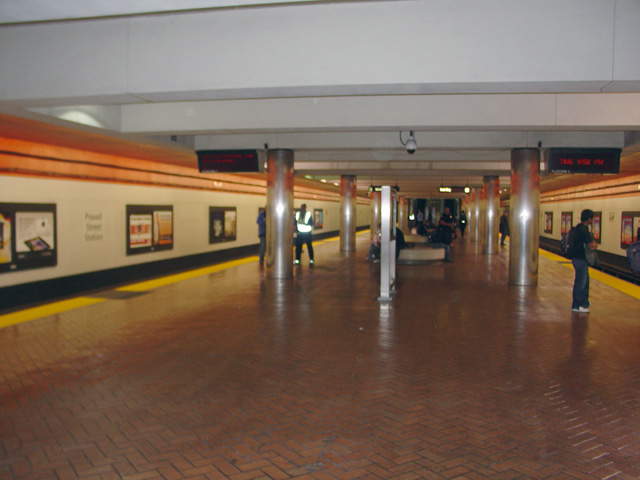 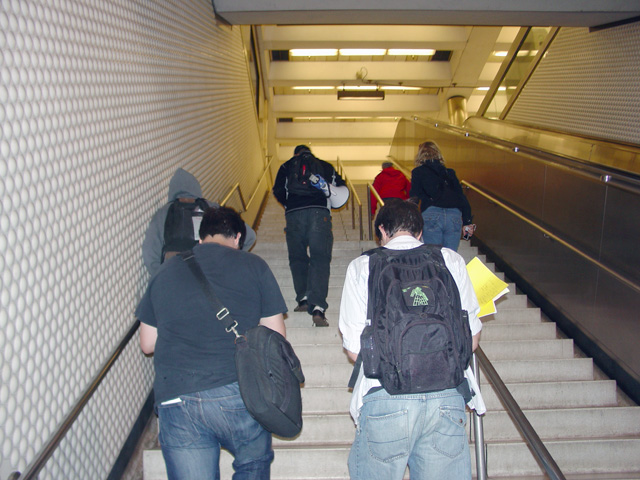 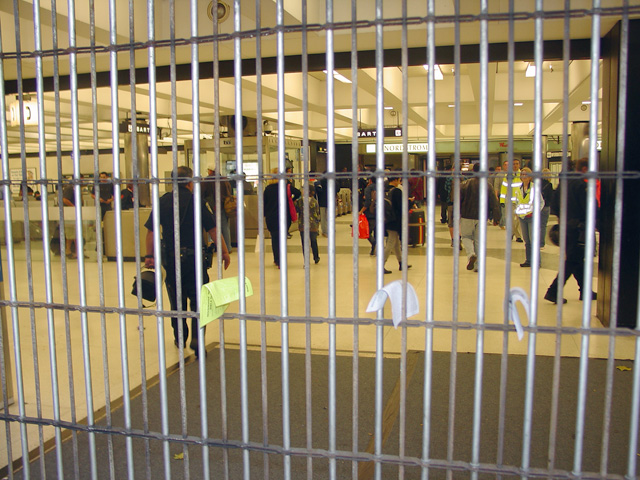 Did they close the station because of the free speech leafleting?