Add an Event
Newswire
Calendar
Features
Home
Donate
From the Open-Publishing Calendar
From the Open-Publishing Newswire
Indybay Feature
Publish to Newswire
Add an Event
Related Categories: San Francisco | Police State & Prisons
BART Hates Free Speech, Anonymous #OpBART Protest, Civic Center station, 8/22/11: video
by dave id
Tuesday Aug 23rd, 2011 3:17 AM
In justification of BART's shutdown of mobile phone service on August 11th, the agency began to disingenuously claim that demonstrations against BART's police brutality were a threat to passenger safety, even though no one has ever been hurt during a BART protest. On August 22nd, at the second demonstration called by Anonymous, BART took this safety rationale to new heights, not only claiming that holding a banner was safety concern but additionally that even raising one's voice was an arrestable threat to safety. Apparently, any criticism of the agency within the BART system is now a safety issue, or at least BART believes that legal rationale relieves them of all obligations toward respecting Constitutionally-protected free speech. 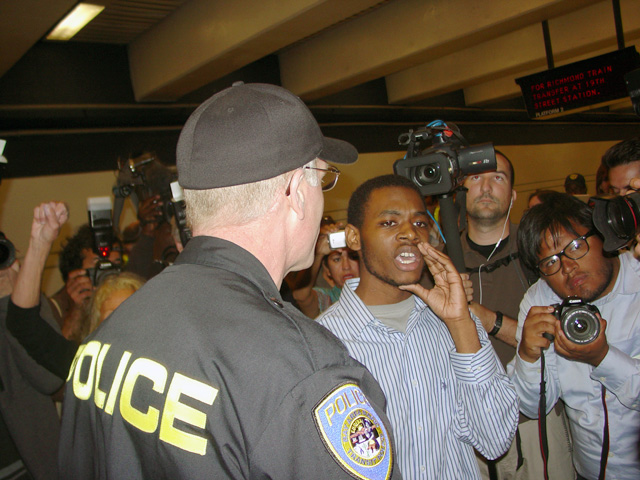 In the video below, BART officer J. Conneely from the BART police department's "Tactical Team" steps up to three demonstrators holding a blue banner, starts to grab it, and tells them that they are subject to arrest for displaying the banner. "You are free to express yourself upstairs. It's a safety issue. You are not allowed to do that down here," he says. Conneely refuses to explain how the banner is a safety issue.

Within another couple of minutes, Conneely tells a demonstrator who is discussing the BART police killing of Charles Hill on July 3rd that she has to "keep [her] voice down… for safety reasons," and that by speaking loudly she is subject to arrest. Picking up on this strange BART police declaration, another protester announces that "if we raise our voices, we will be arrested." That demonstrator then leads a chant of "No justice, no peace, disband the BART police," and is promptly surrounded by BART riot police who proceed to physically remove him from the station for arrest. (Reports are that those arrested within Civic Center station have been charged with trespassing. Go figure.)

It is clear that BART's policy against "expression" within stations is not content-neutral. Four people were arrested in the Civic Center station on August 22nd for speaking out against the BART police, but a passenger who was yelling at protesters was not arrested nor even confronted by BART police, allowed to rant at length. And somehow a political banner has been determined by the agency to be a safety issue, yet BART stations are filled with commercial advertisements, across the walls and sometimes even on station floors and stairs.

BART refuses to hold its police accountable when they beat or kill passengers, and now the agency appears to be at wits end on how to deal with Bay Area community members that won't shut up about it. Being a public transportation system, BART simply cannot stop in-station protests, short of declaring itself an independent country and implementing martial law. And so the agency is grasping at straws, setting new Constitutionally-dubious precedents in its attempts to stifle free speech, from pulling the plug on mobile phone antennas to declaring that raising one's voice on a platform (if the speech is critical of BART) is an arrestable offense. The problem with BART's new approach is that as it futilely tries to ward off public criticism of its violent and unaccountable police force, and the managers and executives that look the other way or help to cover it up, BART has brought upon itself a wave of new critics, from civil libertarians to Anonymous, people who have never protested BART before yet are more than willing to join in the fight for civil rights in the battle against BART. 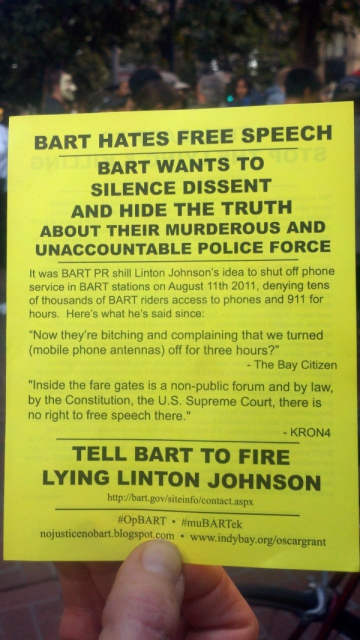 http://www.indybay.org/newsitems/2011/08/1...
Add Your Comments
LATEST COMMENTS ABOUT THIS ARTICLE
Listed below are the latest comments about this post.
These comments are submitted anonymously by website visitors.