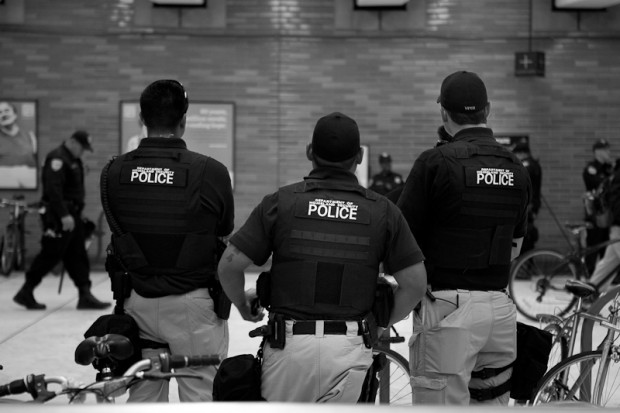 Amongst the dozens of riot gear-clad San Francisco and BART police officers that have packed Downtown San Francisco streets during the OpBART protests for the past three Mondays, you may have spotted some officers wearing khaki slacks and bulletproof vests, a far cry from the heavy duty helmets and body armor worn by officers from other agencies.

Those lightly-clad officers were part of a Department of Homeland Security Visible Intermodal Prevention and Response (VIPR) unit, an anti-terror unit charged with protecting transportation infrastructure from potential acts of terrorism. VIPR units are run by the Transportation Security Administration. According to the TSA’s website, VIPR teams are terrorism deterrents that “a random, announced, high-visibility surge into a transit agency, in addition to enhancing agency resources during special events.” VIPR teams have been deployed more than 50 times since the program began in 2005, and regularly patrol New York’s Metro North and Long Island Railroad commuter systems.

The United States Department of Justice also had personnel on hand for the recent protests by the hacktivist group Anonymous. Xochitl Hinojosa, a spokesperson for the Department of Justice, confirmed that DoJ sent a member of its Community Relations Service to all three OpBART demonstrations this month. CRS, formed by the Civil Rights Act of 1964, is DoJ’s “peacemaker” for conflicts and tensions stemming from racial or ethnic tensions or civil disorder. Hinojosa also confirmed that CRS staff were present at July and November demonstrations in Oakland over the conviction and sentencing of former BART officer Johannes Mehserle, who was found guilty of involuntary manslaughter in the death of Oscar Grant.

Other federal agencies, notably the Drug Enforcement Administration and the Secret Service, contributed to the crowd control actions in Oakland on July 8th and November 2010. It is unclear what role federal agencies are playing in the ongoing conflict between BART and Anonymous, although the Federal Bureau of Investigation is looking into the release of personal information for 102 BART police officers by Anonymous earlier this month.

The Community Relations Service is the Department’s “peacemaker” for community conflicts and tensions arising from differences of race, color, and national origin. Created by the Civil Rights Act of 1964, CRS is the only Federal agency dedicated to assist State and local units of government, private and public organizations, and community groups with preventing and resolving racial and ethnic tensions, incidents, and civil disorders, and in restoring racial stability and harmony.

http://informant.kalwnews.org/2011/08/just...
Add Your Comments
LATEST COMMENTS ABOUT THIS ARTICLE
Listed below are the latest comments about this post.
These comments are submitted anonymously by website visitors.